Did violent gun crime rates rise in Australia after the 1996 gun control laws?

In 1996 Australia passed the National Firearms Agreement (NFA) which greatly restricted the option to legally own some types of guns by private citizens.

The activist site, World Public Union claims that crime is on the rise in Australia since then1.

Since Australia banned semiautomatic rifles, shotguns and pump action shotguns the gun crime rates have skyrocketed throughout the country.

Murders committed with guns increased by 19%.

Assaults committed with guns increased by 28%.

Armed robberies skyrocketed with an increase of 69%. 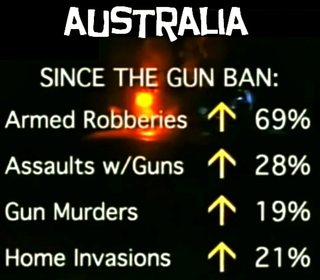 It cites no sources.

Have crime rates been on the rise in Australia since 1996?

1 - The video was hosted on the WPU site, but can no longer be found there, it can still be found on military.com.

Searching Google for the picture brings up this fallowing blog post which address this picture particularly. It cites the 2011 Australian Crime Report (alternative link) published by the Australian Institute of Criminology.

Below is a chart from the annual Australian crime stats report for murders — the short version: murders have fallen 10% just since 2006 and that is raw numbers. Overall murders on annual basis have dropped almost 25% since the late 1990s gun ban. 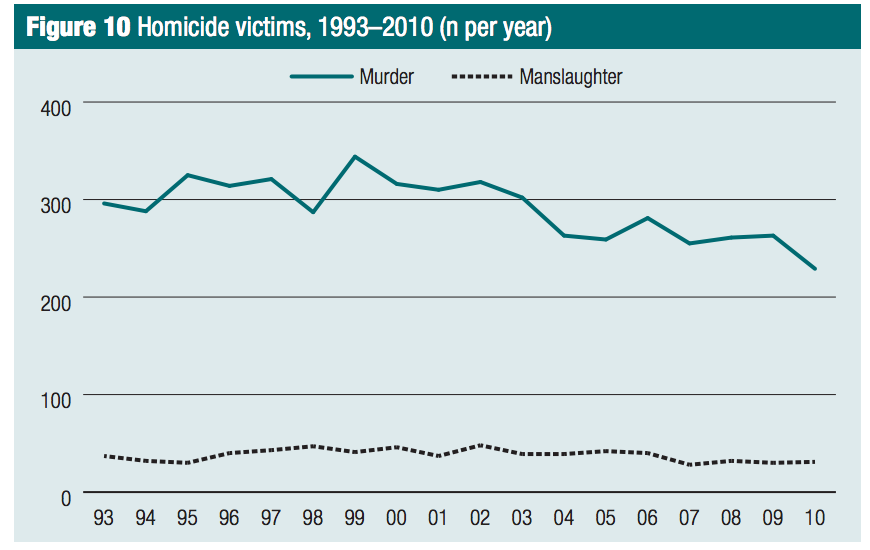 From page 16 of the 2011 Australian Crimes Statistics Report.

Australia did see an increase in violent crime during the 1990s which leveled off after 2001, with exception to a slight rise from 2005-2007. 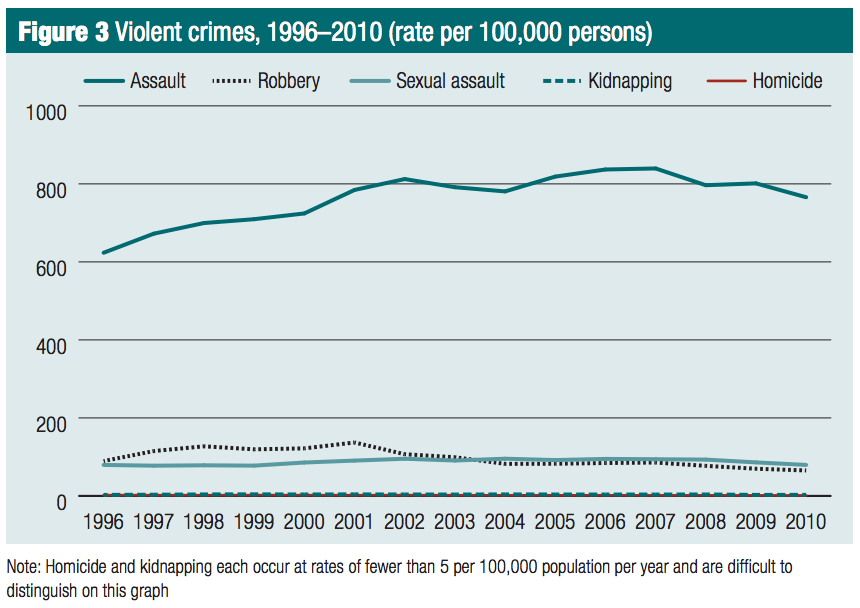 This chart is from page 6 of the 2011 Australian Crime Statistics Report.

There is also a page on Snopes addressing a slightly diffrent rumor regarding rise in crime in Australia, a supposed letter from an Australian police officer. From the Snopes page:

Other claims offered here, such as the statement that "While figures over the previous 25 years showed a steady decrease in armed robbery with firearms, this has changed drastically upward in the past 12 months" and "There has also been a dramatic increase in break-ins and assaults of the elderly" are even more difficult to evaluate, because they don't offer any figures or standards of measurement at all. Do they deal with absolute numbers, or percentages? Do they reflect all incidents of crime, or only those committed with firearms? How much of an increase constitutes a "dramatic" increase? According to the Australian Bureau of Statistics, the proportion of armed robberies involving firearms has actually declined over the last several years:

Not the answer you're looking for? Browse other questions tagged criminology guns australia .

101
Did the UK homicide rate go up after handgun ownership was banned?
69
Is gun control effective?

29
Did the legalisation of abortion result in lower crime rates?
30
Does increased gun ownership in the US correlate with a reduction in violent crime rates?
74
Did the National Rifle Association (NRA) block research into statistics related to gun control?
6
Did a new study prove that relaxing gun control increases murder rates?
12
Did the crime rate drop after mandatory gun ownership in Kennesaw, Georgia?
48
Do [US] states with the most gun laws tend to have the fewest gun deaths?
19
Do Republican legislatures tend to relax gun laws after mass shootings?
101
Did the UK homicide rate go up after handgun ownership was banned?