Did the Porsche which Paul Walker was in at the time of death have a different number plate to the one he was last seen in alive?

I came across a site where in the comments section somebody says that the number plate of the Porsche he was last seen in, was different from the one that crashed. I've tried challenging this claim, but interestingly enough, I managed to find a picture of the last moment of Walker's life where the number plate of the Porsche he got in is shown, but I've searched up dozens of the car crash photos and not one shows even a hint of the number plate. Maybe I'm not looking closely, but can anyone shed light on this topic?

No, it's not true. The claim is based on pictures of the license plate at the crash site memorial, which is not actually the plate that was on the car at the time of the crash.

Here is the last picture of Paul Walker, with the car: 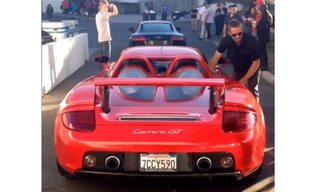 Can be seen on TMZ, Daily News and others.

Note the holder around the license plate has the words "Always Evolving".

Here is the picture of the license plate with a different number at the scene: 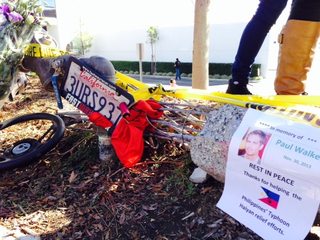 The pictures of the "fake" license plate can be seen at various sites that either discuss the accident or the conspiracy theory.

It's clearly seen that it's outside the crash zone, as marked by the police line. And obviously part of a memorial. Also note that now there is a license plate holder that says "Fast Way racer". Another indication that this didn't come from the car in the first picture. Again, something someone else placed there as part of the memorial.

Now look at the car after the crash: 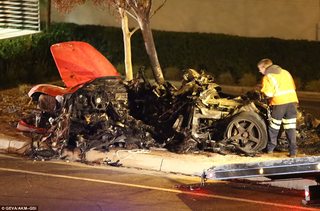 The car is destroyed beyond recognition, yet the license plate in question looks almost new, no dents, no sign of the fire that burned the car, even the plastics and the lettering on it are intact. It's highly improbable that the license plate was part of the car, wasn't burned or damaged during the accident and then was left at the scene by the police/authorities.