Does the alcohol content of drinks make you fat?

One of the many arguments used to try and persuade us to drink less is that the calorific content of alcohol contributes to obesity. For example, this article from the UK NHS Choices website argues, among many other things:

Regularly drinking more than the NHS recommends can have a noticeable impact on your waistline as well as cause less obvious but more serious health problems. Many women don’t realise that two large glasses of white wine not only puts them over the recommended daily limit for regular alcohol consumption, but also provides them with nearly 20% of their recommended daily calorie intake, at approximately 370kcal in total.

Wine, beer, cider, spirits and all our favourite drinks are made from natural starch and sugar. Fermentation, and distillation for certain drinks, is used to produce the alcohol content. This helps explain why alcohol contains lots of calories – seven calories a gram in fact, almost as many as a gram of fat. And, of course, additional calories can be present in added mixer drinks.

But a new book argues that this is just wrong empirically.

Here are a some of the claims as summarised in an Australian news article (I'm sure some will say they would say that):

A six-year study of 43,500 people by the University of Denmark. Key findings: teetotallers and infrequent drinkers ended up with the biggest waistlines, daily drinkers had the smallest.

An eight-year study of 49,300 women by University College Medical School, London. Key findings: women who drank below 30 grams a day (around two medium glasses of wine) were up to 24 per cent less likely to put on weight than teetotallers.

A ten-year study of 7,230 people by the U.S. National Center for Disease Control. Key findings: drinkers gained less weight than non-drinkers. Alcohol intake did not increase the risk of obesity.

And a possible explanation is that the metabolic routes for alcohol digestion don't involve the production of glucose (though, obviously, some booze also contains high glycaemic index carbohydrate so will cause peaks in blood sugar).

Is the claim true? Does the alcohol content of drinks make no observed contribution to excess weight?

The studies quoted in the question are observational, not interventional, and thus are not suited to address the question: "does the alcohol content of drinks make you fat". To answer that question, we need an interventional study to look at the counterfactual.

This has been done in the case of alcoholics (Lieber, 1991).

To investigate whether ethanol contributes to the body’s energy balance according to its caloric value of 7.1 kcal/g, the effects of ethanol on body weight were assessed in 14 [alcoholic] subjects given ethanol under metabolic-ward conditions.

Isocaloric substitution (replacing calories they would have been consuming with ethanol calories) of up to 50% of the daily calorie intake resulted in a 0.9kg decrease in weight over 16 days, compared to +0.04kg increase in weight in a control group. This was statistically significant (p < 0.001). This experiment used 12 subjects.

Weight watchers are usually advised to restrict their alcohol consumption. This advice is based on the assumption that the calories derived from ingested ethanol are approximately the same as those liberated when ethanol is combusted in a bomb calorimeter, namely 7.1 kcal/g. This advise is still wise and pertinent in the case of the social drinker because all of the evidence related to the above-concerning energy deficit pertains to the chronic abuser of large amounts of alcohol. The energy loss seems to result either from the liver damage produced by alcohol and the consequent inefficient utilization of fat as well as other nutrients, and/or the energy wastage associated with the induction of microsomal pathways that results from the chronic consumption of substantial amounts of ethanol.

(Suter and Angelo, 2005) examine the broader question as it effects non-alcoholics.

The studies you quote would fall under that description. They are three studies that show a negative relationship between alcohol intake and body weight. However, they are only part of a larger body of work that presents conflicting epidemiologic data.

Here is their summary of epidimiological studies, organized into whether they found a positive, negative, or no relationship between alcohol intake and body weight: 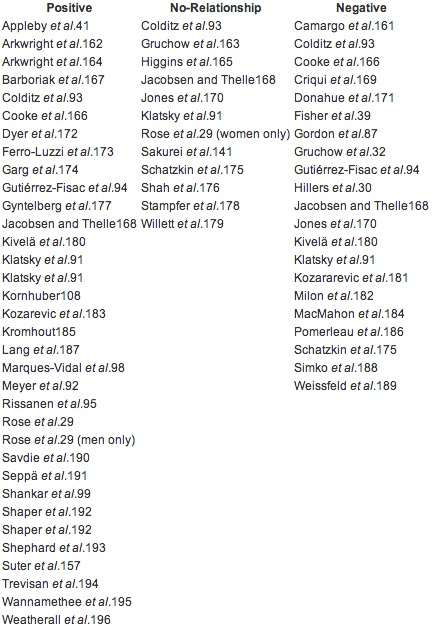 Regarding the moderate drinker:

The experimental metabolic evidence suggests that the consumption of moderate amounts of alcohol has to be accounted for in the energy-balance equation and may represent a risk factor for the development of a positive energy balance and thus weight gain.

Experimental data in combination with epidemiologic findings suggest that alcohol energy counts more in moderate nondaily alcohol consumers than in some moderate daily and all heavy consumers.

There is also a large individual variation in response to alcohol, strongly influenced by genetic factors (Suter and Angelo, 2005).

They conclude that the question should be rephrased:

How much alcohol calories count is highly dependant on the individual. Factors that conspire together to affect the energy balance of an individual include "body weight, substrate composition of the diet, substrate oxidation capacity, genetic background, gender, and physical activity as well as the drink (i.e., frequency and amount of consumption, pattern of drinking regarding concomitant food intake)". (Suter and Angelo, 2005)

"The alcohol calories count more in an overweight person, with a high-fat diet, low levels of physical activity, and a positive family history of obesity as well as a low rate of ethanol degradation." (Suter and Angelo, 2005)

Not the answer you're looking for? Browse other questions tagged nutrition physiology alcohol .

33
Are we eating too many carbs? And do we need to switch to the primal/paleo diet?
67
Does having late or heavy dinner make you fat?
21
Does drinking alcohol through a straw make you drunk quicker?
35
Does consuming different types of alcohol make you more sick than others?
10
Have recommended calorie intakes increased significantly over the years, and if so is it due to food industry lobbying?
14
Does gliadin in wheat stimulate appetite to the point of obesity?
29
Does drinking alcohol dehydrate you?
11
Does drinking coffee or tea dehydrate you?
9
Drinking 3 glasses of milk per day doubles a woman's chances of death?