The extinction of the thylacine: could some still survive? 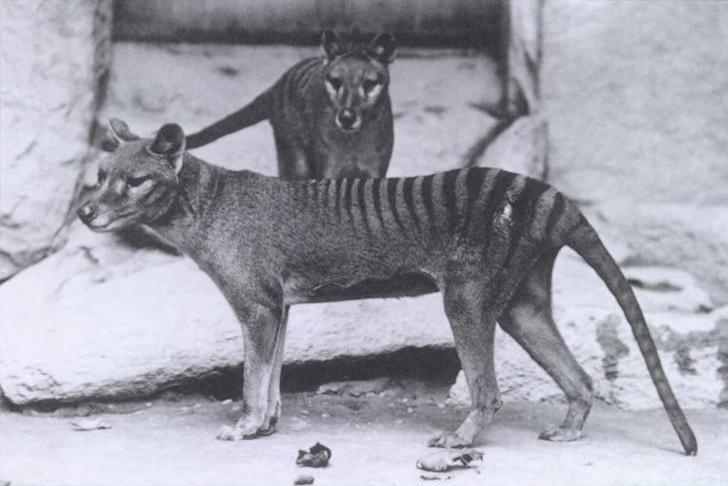 The last known thylacine died in 1936, and the species was officially moved from 'endangered' to 'extinct' in the 1980s. Since the last living specimen died, there have been well over 3000 reported sightings, some with photographic evidence, of living animals.

Unlike many other cryptozoological animals, like bigfoot or Ogopogo, thylacines are (or were) real animals.

Is there any evidence that some animals still survive in the less populated areas of Tasmania or mainland Australia?

There have been no recorded thylacine sightings on mainland Australia in modern (European) times. Tasmania is certainly its last hope, and that hope is very small indeed. What might be called "reliable" evidence such as tracks, scat and vocalizations were last recorded during searches in the 1960s, although these were inconclusive. Since then it's been reported sightings only, occasionally accompanied by dubious photographic evidence.

While it's likely that individual thylacines lived beyond the 1930s, it's essentially impossible, ecologically speaking, that any remnant population was large enough to sustain the species to the present day.

The book The Last Tasmanian Tiger by Robert Paddle records several accounts as of thylacine sightings on mainland Australia in modern (European) times.

A naturalist named Cambrian, claimed to have inspected recently deceased remains collected from the Blue Mountains, west of Sydney, NSW in the 1880s. He inspected a second dead animal at a location concluded by that author to be the Flinders Ranges, in SA. Indigenous people in the same location in SA had "living memory" of live Tasmanian Tigers which, when you do the maths, date to the early 1800s - approx 1830s.

If you research historical newspapers you'll find three accounts of two different thylacines killed in the Blue Mountains in the 1800s. These are simple matter-of-fact accounts talking about Tasmanian Tigers getting shot.

With mainland accounts, however, you need to be careful of terminology. While we call them Tasmanian Tigers now, or Thylacines, they have variously been called Tasmanian Wolves, Hyena Opossums and other things - depending how far back you search historical records. Further, the animal we now call Spotted-tailed Quoll was previously called Tiger Cat - so accounts of "Tigers" in historical accounts are spurious and could equally refer to quolls or thylacines - you need to check carefully.

Perhaps one of the most credible mainland accounts is the case where the West Australian government commissioned Kevin Cameron, an Aboriginal tracker, to investigate continuous sighting claims coming from the southwest of that state, in the 1980s. (For context, see this 2004 article in Conservation Science summarizing 203 alleged sightings in southwest Western Australia investigated by the Department of Conservation and Land Management.) After several weeks, Cameron returned with a series of photographs showing what appeared to be the rump of a Tasmanian Tiger - the rest of the animal obscured by the buttress root of a tree, behind which the animal was digging in the dirt. Some of the photographs were published in New Scientist magazine. 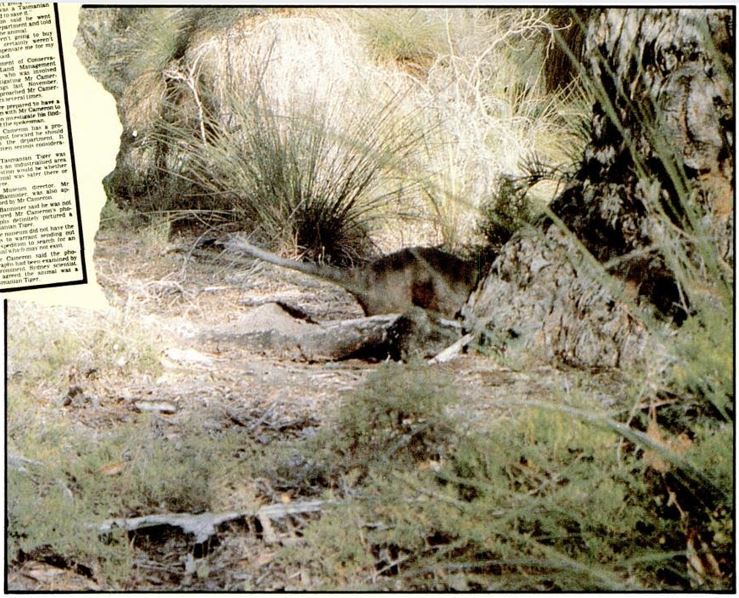 The story goes a little cold soon after, with some people taking the view Cameron feigned the shoot using a taxidermy, others suggesting the tiger is real enough but Cameron or a colleague shot it (which would have been illegal) and Cameron alleging something like a coverup of the truth of tigers being there in order to protect primary industries such as mining.

I had the fortune to speak to Kevin Cameron at length about this event only last year. I was the first person Cameron has spoken to publicly about the "Kevin Cameron Thylacine" since the 1980s. You can read my full account of my analysis of this evidence, together with additional details of Cameron's story, at my website, Where Light Meets Dark. The conclusion I came to is that the body shape in the photographs is consistent with a Tasmanian Tiger - however the animal is probably larger than it at first appears. It seems the portion of the body in view is only a quarter of the animal - the upper half of the rear half. This suggests the animals feet are lower down, behind that buttress root, than the ground level in front of the buttress root - which is consistent with Cameron's story since the beginning, that the animal was digging behind the tree.

Moving on to Tasmanian accounts, the account which bears the most merit to me relates to the Adamsfield thylacine.

Researcher and author Col Bailey recounts a story in his book Lure of the Thylacine that some hunters accidentally shot and killed a Tasmanian Tiger in 1990 near the ghost town of Adamsfield. Photographs were taken, Col obtained a copy of two photos and these show the animal's feet, one of which had a fresh wound on it.

Within 12 months of Bailey's publication of this account, a new party to the story came public via a filmed interview with the Thylacine Research Unit (TRU). This was "Rusty" Morley, ex-serviceman and professional tracker who stated the photograph was his but it related to a deceased animal he found under a rock overhang or similar, as opposed to it being killed.

At this point what interested me about this account was that although we had two different versions described as to how the animal died, what was not in contention was the fact (or allegation) that there was a recently deceased Tasmanian Tiger in about 1990 in Tasmania.

The story gets more complicated, however. I spent close to two years investigating the Adamsfield Thylacine. Long story short - a reader of my website happened to notice a video, published on YouTube, that was filmed in 1997 by the Australian Rare Fauna Research Association (ARFRA), based in Victoria. In that film, their founder, Peter Chappel, is seen investigating a large portion of Museum Victoria's thylacine specimen collection. One item in the collection is a skin and the skin's foot shows a patch where the fur is missing - essentially an area similar in appearance to the "wound" on the foot in the Adamsfield photograph.

The investigation continued and Museum Victoria graciously supplied new, high resolution photographs of that taxidermy specimen for my comparison with the photograph published in Bailey's book.

On first thought the case seemed cut and dried - that there was some mistake, or mis-allegation, and that the photograph simply showed a museum taxidermy. However the devil - or tiger, in this case - is in the detail: The second Adamsfield photo again shows one of the taxidermy's feet, but it is lying on top of yet another photograph, and that photograph shows an unrelated foot - matching Tasmanian Tiger in key features - and that foot is lying on the ground, outdoors.

This point is key and pivotal! My interpretation of these details is that:

To me, this account shows an incredible level of detail, accuracy and consistency with the allegation that in about 1990 there was a freshly deceased thylacine in Tasmania; it was photographed and - as the new insights show - at least one of these photos was taken to Museum Victoria (perhaps a little too close to home to go to the museum in Hobart?) for the purpose of comparison with a thylacine's actual foot taxidermy.

All this being the case, it would mean the Tasmanian Tiger survived 54 years in the wild - from 1936 to 1990 - without our being able to prove it's there. It's only been another 29 years since then - barely half that time again and I find it completely feasible the species still persists.

There are many more accounts, and many more details I have uncovered through my research that add to this picture, but for now, the Adamsfield thylacine remains one of the strongest items of evidence in the public domain for consideration.

I have answered 20+ similar questions from the public on a whole range of topics relating to Tasmanian Tigers - follow the link to read more.

I have now published an article on an animal track line I discovered in Tasmanian which, after analysis, better matches Tasmanian Tiger than Tasmanian Devil, on the basis of our current understanding of the tracks produced by these two animals. There is room to improve our research and understanding of devil tracks and I explain this in the article.

18
Is the Texas Chupacabra real?
55
Can cats survive a fall from any height?
16
Do (some) Louisiana schools teach the Loch Ness Monster as evidence for creationism?
5
Could the Australian Aborigines have Descended from Three People?
20
Have cats hunted at least 33 species to extinction?
16
Is the Earth experiencing another mass extinction event?
11
Do European deer still stick to their sides of the Iron Curtain?
14
Did the submersible 'DSV Alvin' spot a living plesiosaur?
8
Is there a breeding population of big cats living wild in the UK?