Did a group of U.S. women propose to send black kids instead of dogs to space?

In his 1964 book "The third side of the dollar", Lithuanian journalist Albertas Laurinčiukas writes:

After Laika's flight, a group of women from Mississippi, U.S., sent a letter to the United Nations. They demanded to condemn USSR's inhumane treatment of space dogs and put forward a proposal: "if science needs to send living creatures to space, there are plenty of black kids in our town for this purpose."

This is quite a popular story in the former USSR, but I failed to find any mentions of this letter except in the book and citations therefrom.

I've been unable to find any reference to this letter and I must say that it certainly has the ring of propaganda about it. 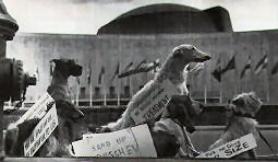 It's probably this incident that the author is referring to. The similarities seem too great to be a coincidence.

Some background from a portion of the book Soviet Space Dogs suggests that this claim was most likely propaganda written as a response to the protests described in the answer above, but offers no proof for or against the claim.

The international press accused the Soviet totalitarian regime of inhumanity, and suggested that General Secretary Khrushchev should have been sent into orbit instead. In response, the Soviet press wrote about the hypocrisy of capitalist morality, the exploitation of entire nations in the colonies, and racism.

In his book Trecioji dolerio puse (The Third Side of a Dollar, 1964), Albertas Laurinciukas, an American correspondent for the newspaper Selskaia Zhizn (Country Life), mentions the following anecdote. In the aftermath of Laika’s launch the United Nations received a letter from a group of women in the state of Mississippi, who condemned the inhumane treatment of dogs in the USSR, suggesting that if it were absolutely necessary to send a living being into space, why not send a group of Negro children, (of whom there were plenty in their town), rather than a poor dog.

It’s hard to imagine that such a letter ever really existed , but the USSR’s official anti-racism policy was a strong weapon in the Cold War against the USA. Regardless of these arguments, Soviet ideology was faced with a serious dilemma. Since denying Laika’s death was impossible, their only viable option was to immortalise her.

Not the answer you're looking for? Browse other questions tagged united-states space-flight racism .