Many manufacturers of photovoltaic solar panels offer some sort of warranty that is valid for 15 to 25 years. Many people suggest that after that period of time, a replacement of the panels is necessary

The lifetime of solar panels (photovoltaic panels) on average ranges between 20-25 years – different solar panel companies may give different guaranties for the performance and operation of their solar panels.

PV panels can last up to 25 years or more, some with a maximum efficiency loss of 18% only, even after 20 years of operation.

Both suggesting that there is about a 20 year lifetime and then you have to replace your solar panels.

I am skeptical that something that works 20 years would, all of a sudden, stop working and require replacement. I expect that a non-mechanical device has little wear-out. That's why there is a relatively long warranty period. For that reason, it is not reasonable to expect much performance loss over time. I expect that even after 20 years, a solar panel will still generate at least 80% of its initial performance which really makes me wonder about why a replacement should be necessary.

The life time of photo voltaic (PV) cells is fundamental in assessing the ecological impact and greenhouse gas emissions of solar power. As such, it has been studied in thousands of papers, some of which report on measurements spanning 20 years.

The problem with the panels is that their efficiency drops a certain amount per year. After a while, the panel fails -- there are studies around the various failure modes as well. This yearly degradation has been measured to be between 0.5% and 1% (depending on study and PV type), however failure is due to cumulative damage and is catastrophic (e.g. a panel at a certain point short circuits).

So obviously you need to replace a PV panel only when it short-circuits or shunts and stops working, or when it's not cost-efficient anymore due to a grossly degraded efficiency, however if you have many -- such as in a power plant -- what matters is the number of average years: some panels will break sooner, some later and basically only the average affects your bottom line.

A very good meta-analysis of ~2,000 studies has been performed by the US National Renewable Energy Laboratory.

What they found is that recent PV systems are predicted to last over 25 years (maybe 30 or so), the older one are a litlle less reliable. The figure that follows is takend from the NREL study linked above and gives an idea of typical measured life times of panels in studies varying by the year the study was published. 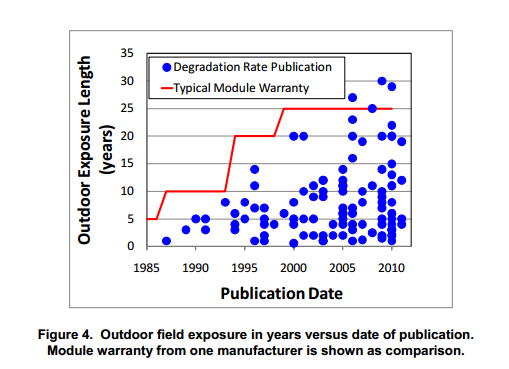 Not the answer you're looking for? Browse other questions tagged technology energy .

6
Are Chinese companies dumping defective solar panels in other countries?

31
Does the production of a home PV solar panel provide a net benefit to the environment?
23
Are 1 to 4 tons of coal required to create only one solar panel?
110
Was there Cyrillic text visible on Intel 386 chips after decapping?