Did Jean-Claude Van Damme do a suspended split between two trucks? 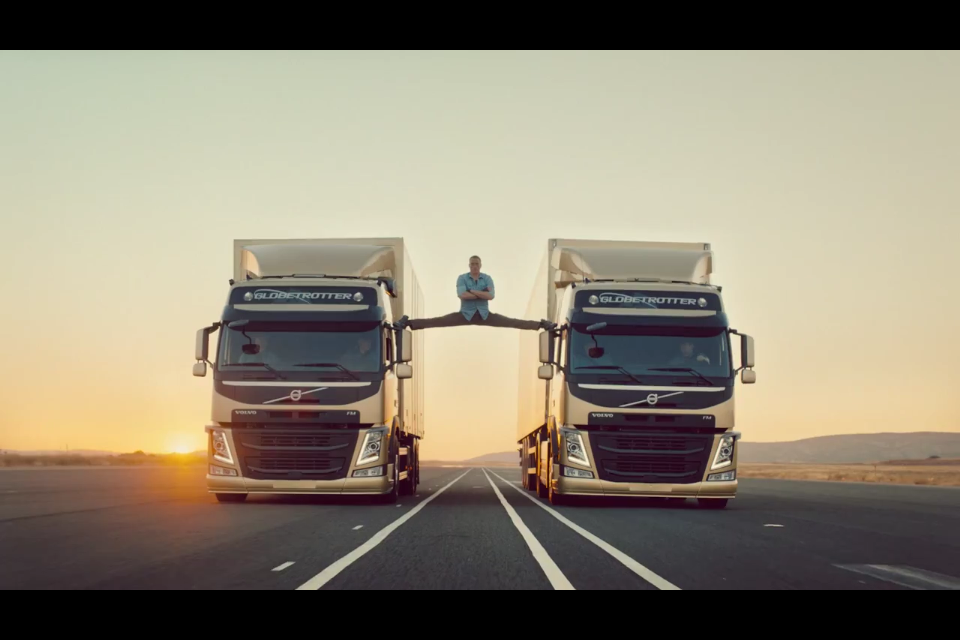 I tend to think that what we see in the video is quite real, however impressive. But perhaps I'm gullible and missing something. Am I or is this "for real"?

According to "How Volvo Created the Jean-Claude Van Damme ‘Epic Split’ Video":

Van Damme, 53, was hooked to safety lines that aren’t visible in the film, and each foot is on a small platform that was built on the trucks’ side mirrors.

Van Damme’s feet aren’t secured to the mirrors, video director Andreas Nilsson said, “but we had him rigged so that if he would fall off he wouldn’t die obviously. We didn’t want to be responsible for killing the Muscles from Brussels.”

I checked, to the best of my abilities, for discontinuities or any unexplained shadows, reflections, backing-up lights not being on, light/shadow on JCVD's face, etc. and couldn't find any. It doesn't help that the sun light is from behind. However, perhaps there is a technique to identify some CGI being used in certain areas of the frame. (Perhaps covering up some cables, although they could also be hidden behind him or in his pants.)

(One remaining doubt: the relative height of the trucks, seemingly changing around 0:36, which might be explained by the right truck moving slightly faster? Or is this explained by the moving away of the left truck, at that time?)

From the movement of JCVD's pants bottoms as they fall from his boots (from 0:41) it can also be deduced that it is very unlikely that the film was played backwards (in case you were wondering).

Note that it is relatively difficult for a combination truck to drive backwards in an extremely accurate fashion. (Try parking backwards with something attached to the back of your car, let alone driving in this fashion.) However, the combination truck on the right "only" has to keep a straight line (possibly helped by the Volvo system that's being advertised), whereas the left truck is rigid, and therefore much easier to manoeuvre. This is the only truck, in the video, that moves away to accommodate the split.

I almost forgot: Unless JCVD's whole career was faked, there's isn't much reason to doubt his "splitting abilities".

Yes it's real, as real as anything you see on TV or in the Cinema these days.

So we know that the phrase "6th live test" does not imply that JCVD had tried 5 times to do this stunt, it instead refers to the 6th commercial Volvo have put out there to show off their trucks and associated technology.

There is a behind the scenes video on youtube, which captures JCVD's response to the stunt being explained, and some other footage which, albeit possibly staged, seems genuine enough to imply that the stunt was indeed carried out as described.

I find no immediate reason to believe that this stunt was faked, or carried out in any way but that described in the above video. There appears to be no CGI, nor external straps or supports. However, that is not to say that some good post-production could not hide such things from the viewer.