Does England devote as much land to Golf as housing?

England is, apparently, one of the most "crowded" countries in the world with a high population density and the population is growing quite quickly. This has prompted a variety of concerns about immigration and the possibility of "concreting over the countryside" with new build housing.

But a campaign group for the homeless and for better housing, Shelter, recently claimed that England uses as much land for Golf courses as for homes:

According to a comprehensive government assessment in 2011, that’s the same amount of land in England used for homes.*

For golf, Colin uses the figure of 2,700 courses in the UK scaled to England. The average size of playing area is 30-40 hectares with the average full size of a course (including space between fairways) adding another 30-40 hectares. Colin therefore assumes 75 hectares per course multiplied by 2000 courses which is 150,000 ha, or 1.1% of England’s 13.4m hectares.

Are their assumptions reasonable? Is their claim correct?

This gives around 662,000 acres of urbanised acres in the UK.

The assumptions are broadly reasonable, but are at the optimistic end of reasonable and it seems that there is more housing land in the UK than golf land, but the numbers may be of the same order of magnitude, it seems.

According to the financial times, Shelter over estimated the amount of space used by golf courses. Shelter also only counted the space used for bricks and mortar when calculating space for housing, they didn't count gardens or anything else (driveways, paths, roads the homes are located on). You might also need more road space for the same area homes occupy compared to golf courses.

The head of Shelter admitted the errors. 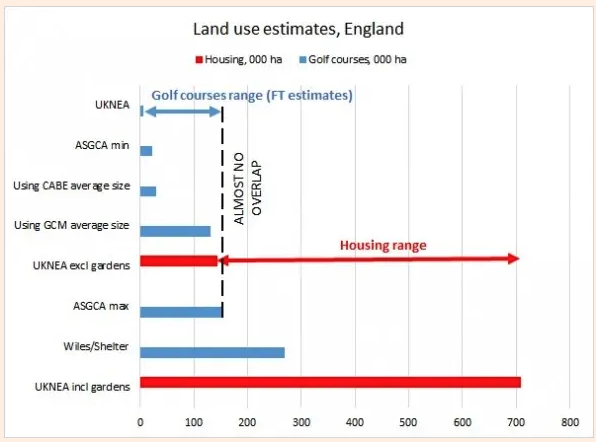 4
Is sadomasochism more prevalent in England than in other countries?
5
Is the weather particularly bad in England?
31
Does Queen Elizabeth II own 6,600 million acres of land?
38
Is refusing to decrypt data for the police illegal in England and Wales?
8
Did King Henry VIII of England explode in his coffin?
72
Is Muhammad one of the most popular names for boys in England and Wales?