Are there enough unused houses in America for each homeless person to have six? 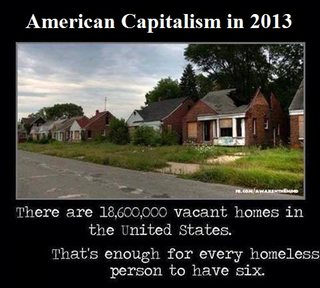 I can't find a source for this, and that number seems much too high to me (although I don't know much about the subject). Is this true? If not, what is the actual ratio of homeless people to vacant houses?

No, the proportions are far more extreme than six vacant houses per homeless person.

There are 633,782 people experiencing homelessness on any given night in the United States.

The number of vacant houses seems to be correct for 2009 (but seems to have fallen since to 14M, see below). The number of homeless people may be much lower (~630,000), but that may depend on definition. Using these numbers brings the ratio to 22, and given that a house can house more than one person, the ratio becomes more pronounced.

The numbers may have been originated from amnesty - http://blog.amnestyusa.org/us/housing-its-a-wonderful-right/ but I did not find their source.

8
Do Americans spend 49 billion dollars a year on pets?
8
Does the US have $54 trillion?
29
Are Americans ignorant of geography and the world?
31
Are there 24 empty houses "available" per homeless person in the USA?
22
Does the UK government have only 300 staff investigating tax evasion of £70bn+ vs 3250 staff investigating benefits (welfare) fraud of £1.2bn?
48
Is Donald Trump's ratio of bankruptcy to businesses consistent with the success rate of other entrepreneurs?
6
Are one-third of human deaths from "poverty-related causes"?
24
Do 40,000 people die in the United States for every 1% increase in unemployment?