Did Christopher Columbus ever make this statement?

This was posted to Reddit's /r/occupywallstreet for Columbus Day 2013. 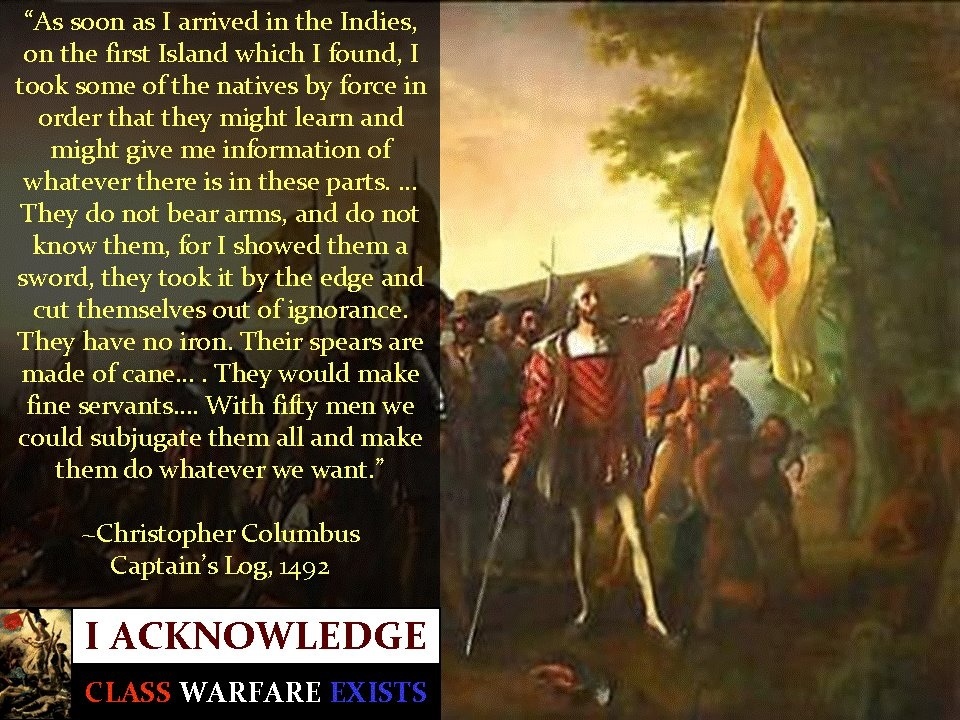 "As soon as I arrived in the Indies, on the first Island which I found, I took some of the natives by force in order that they might learn and might give me information of whatever there is in these parts. [...] They do not bear arms, and do not know them, for I shoed them a sword, they took it by the edge and cut themselves out of ignorance. They have no iron. Their spears are made of cane[...] They would have make fine servants[...] With fifty men we could subjugate them all and make them do whatever we want." - Christopher Columbus Captain's Log, 1492

I struggeled to find an official copy of the captain's log online, but there are two that have a lot of commonalities,

Both of these lead one to a similar conclusion,

Thursday, 11 October., Weapons they have none, nor are acquainted with them, for I showed them swords which they grasped by the blades, and cut themselves through ignorance. They have no iron, their javelins being without it, and nothing more than sticks, though some have fish-bones or other things at the ends. [...] It appears to me, that the people are ingenious, and would be good servants and I am of opinion that they would very readily become Christians, as they appear to have no religion.

You can see the translations here is pretty similar. "Weapons"" vs "arms", "cane" vs "sticks", "fine" vs "good". It's pretty close.

Sunday, 14 October., I could conquer the whole of them with fifty men, and govern them as I pleased.

And the conclusion is pretty accurate: conquer vs subjugate.

The only notable exception, using the Fordham archive is this,

"As I saw that they were very friendly to us, and perceived that they could be much more easily converted to our holy faith by gentle means than by force, I presented them with some red caps, and strings of beads to wear upon the neck, and many other trifles of small value, wherewith they were much delighted, and became wonderfully attached to us. Afterwards they came swimming to the boats, bringing parrots, balls of cotton thread, javelins, and many other things which they exchanged for articles we gave them, such as glass beads, and hawk's bells; which trade was carried on with the utmost good will. But they seemed on the whole to me, to be a very poor people. [...]"

This seems to indicate Columbus was not hostile from the first encounter.

However, the quote from above can be found in the Santangel letter as reproduced and translated here.

They knew no sect and were not idolaters, except that they all believe that power and good come from heaven, and they believed very firmly that I and these ships and crew came from heaven and in this belief they received me everywhere, once they had overcome their fear. And this is not because they are ignorant; rather, they are of subtle intelligence and can find their way around those seas, and give a marvellously good account of everything; it is only because they have never seen men clothed or ships of that kind. When I arrived in the Indies, at the first island I found I took some of them by force so that they could learn and give me information about what there was in those parts, and in that way they soon understood us and we them, whether by word or by sign; and they have been very useful to us. I still have them with me, and they still insist that I come from heaven, in spite of all the exchanges they have had with me, and they were the first to announce this wherever I went, and the others would run from house to house and to the nearby towns shouting: "come, come and see the people from heaven." In this way they all flocked in, men and women alike, great and small, once they were confident about us; none were left behind, and they all brought something to eat and drink, which they gave with marvellous affection.

All of this was said or written by Christopher Columbus with very little deviations in the translations however it comes from at least three separate sources: two entry in the ships log and one in a the "Santangel letter".

It seems to be a couple different quotes shoe-horned into looking like a single quote.

With fifty men we could subjugate them all and make them do whatever we want." - Christopher Columbus Captain's Log, 1492

This quote is actually from a letter to the monarch, explaining why the Spanish probably don't need to build a fort on the island.

I'm guessing the other quotes are also plucked out without context.

Not the answer you're looking for? Browse other questions tagged quotes christopher-columbus .

0
Was Christopher Columbus involved in the slave trade?

65
Did Christopher Columbus believe America was India?
12
Did Columbus order atrocities against the Lucayan people?
21
Did Fidel Castro ever make this prediction?
35
Did Noam Chomsky make the statement on privatisation that's attributed to him?
13
Did Hitler ever make this quote?
0
Was a copy of Bobadilla's lost report on Christopher Columbus found in a Spanish archive in 2006?