Short introduction: Recetly some russian newspapers talked about airplane, lost in Moscow Sheremetevo airport. And this airplane was claimed to be full of Euros in cash, up to 20 billions (20 000 000 000, 200 wooden pallets with €20bn in €100-notes). There are some english versions of the story: b.insider, news au, rtbh or just google for koroorian motlagh or Farzin Motlagh.

But today the RBC Daily posted a story about origin of such amoutns of money and my question is about this publication:

There is unreferenced claim:

the story began when the United States and Iran were still friends, and the Americans were buying oil from the Iranians. At the beginning of 90s Americans being tired of carrying dollars to Iran offered to send them two U.S. Federal Reserve System officers along with a printing machine, for the Iranians to print for themselves as much dollars as oil is delivered. This scheme worked until the nuclear program of Iran started to bother the United States. The Americans immediately canceled all the contracts and took the machine back. ... Then the Iranians began to think, what to do with these dollars which amounted to six trillion

There is additional claim in russian text: "(Iran accepted only cash)"

Then the claimed scheme was stopped due to Iranian nuclear program, and money was converted with help of Russia, Germany and Italy. Dollars were converted into euros in Frankfurt.

Are there evidences that:

So all the trades are made in US dollars, however I cannot verify if it was made in cash.

It is possible to USA to send FRS officers and dollar-printing machine to other country. Even to Iran?

This is not verifiable, everything is possible, the questions should be formed as "has it ever happened ?" And if it is, I have found some sources that suggest it might be true, but I cannot confirm it completelly, since I cannot find original references.

It is possible to print 6 trillions dollars outside the USA ?

This is a very broad claim, anybody can print a dollar on a printer, but there are different quality of dollars, if we are talking about Iranian dollars mentioned in original articles, then they are so called SuperDollars - A very high quality counterfeit United States one hundred-dollar bill

According to this article in New York Times:

The third world is the playground of the bogus C-note. The United States Secret Service said $248 million in counterfeit American currency was seized outside the United States last year, compared with $73 million seized domestically.

This is for 1994 - we can speculate how much counterfeit dollars are out there in circulation.

According to US Federal Reserve:

There was approximately $1.21 trillion in circulation as of September 11, 2013, of which $1.16 trillion was in Federal Reserve notes.

So I have a hard time believeing that 6 Trillion ! have been printed in Iran alone. In my analysis below I can only get a figure of 12 $ Billion annualy. There is no better evidence that can support this claim.

This is such a long story so it is impossible to explain what exactly happened.

First of all here are the original articles (in Russian):

I cannot confirm if plane is real or not, this is another research story.

It seems to me that the article is wrong - it states that the printing of money has only started in the 90-s and ended with Iran nuclear ambition, but this is not the case. The sources that I found so far states that by 90-s Iran and US were clearly not friendly. Since The 1979 revolution and The 1979 Iran hostage crisis their relationship has been getting only colder.

A consequence of that is 1979 oil crisis

According to US Department of Energy graph: 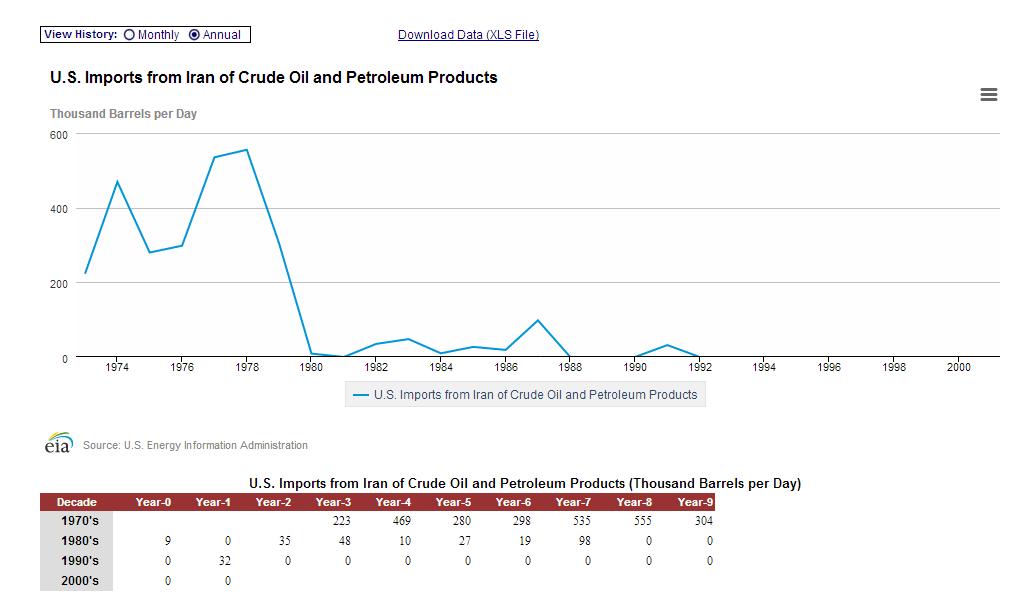 But Iran and US were friends since 1953 Iranian coup and possibly shared printing equipment but this is something I cannot verify beyond few sites like that and that.

One operation in which Tatum has knowledge, regards the so called "Superbills," or "Supernotes" sting. Years earlier, in the late sixties or early seventies, the CIA had secretly provided to the Shah of Iran a perfect set of printing plates that could reproduce US$100 bills without blemish. Also provided was an intaglio printing press. This special printing press ensures that the etched plate meets paper with tremendous force, creating the distinctive embossed feel of a genuine banknote. In addition, the Shah was also given the ink and banknote quality paper enabling him to produce perfect counterfeit US Dollar banknotes. The Shah later fled Iran and left the plates and press behind in his confusion. The whole caboodle sat in the mint at Tehran, according to some experts

This quote referes article in New Yorker, but I cannot verify this since access is locked.

I've also found some more articles that support the claim that "US has shared printing equipment with Iran":

According to this report in 1992 from "United States. House Republican Research Committee. Task Force on Terrorism and Unconventional Warfare" alleges:

A joint Iran-Syria conspiracy to counterfeit U.S. dollars, purportedly in order to strengthen Iran's economy and weaken the United States.

"The fact of the matter is that the Iranian government, in cooperation with Syria, has undertaken a massive counterfeiting campaign in order to alleviate their financial difficulties and pursue economic warfare against the West," Representative Bill McCollum (Republican of Florida) said in a July 1 news conference.

"The Iranians last week outraged me personally when they put in their official publication the statement that this counterfeit money was being produced by the United States 'intelligence community' and distributed over there," McCollum said. "That's hogwash."

According to this newspaper article by "The Post and Currier":

"It was impossible to determine how many counterfeit bills were being produced by Iran and distributed through Syria's drug and terrorist connections. Iran's goal appears to be printing up to 12 $ billion annually to erase its foreign currency shortfall" - McCollum

And here is the interesting part:

The report says the operation uses U.S. built presses, U.S. trained chemists and money printing expertise obtained from the United States during the rule of the late Shah of Iran

DMINATOR, Can you add oil price graph to estimate how much oil export per year costs?

Combining the graph in DMINATOR's answer with the graphs on http://www.wtrg.com/prices.htm allow an estimate of the value of US oil imports from Iran.

Looking at the graphs, an overestimate is as follows:

So "six trillion" seems improbably high: by at least one order of magnitude.

IMO that falsifies one detail of the claim (although the "20 billions" in question is only a small fraction of 6 trillion).

15
Did JFK Attempt to eliminate the power of the Federal Reserve Bank to loan money to the US?
51
Did Obama apologize for the USA using nuclear weapons on Japan?
13
Did an unmarried couple in Iran get shot for holding hands in 2007?
0
Did Federal Reserve Chairman Jerome Powell backtrack on raising interest rates from 2.5% to 3.25% in Jan 2 2019?
1
Did Emma Willard send a letter to the French government appealing for women’s suffrage in 1848?
4
Did Iranian state TV say that the drone attack on the tanker in July 2021 was in retaliation for an Israeli strike?
19
Did the USA increase oil imports from Russia after the Ukraine invasion?