How much has Magnetic North shifted in the last few years and would this affect aeronautics?

I was talking to a contractor at a major U.S. airport, a Project Manager who told that they were moving the runways due to the shifting of 'Magnetic North'. I have heard that the poles have shifted even after the Chilean quake that registered at >8.0. I have no knowledge of planes, flight or the reason for needing to shift runways.

How much have the poles shifted and can anyone knowledgeable in aeronautics either confirm or deny a need to do this?

The story is slightly less dramatic than it sounds.

The runways themselves are not being "shifted" (i.e. construction crews getting out and laying tarmac), but just renamed and signposted.

From a Livescience report

Runways are designated according to the points on a compass, and the drifting magnetic north means that they, periodically, need to be renamed.

"Recently, the drift has caused our runways' orientations to be closer to the next increment on the magnetic compass," Tampa International Airport spokeswoman Brenda Geoghagan told LiveScience in an e-mail.

For example, the west parallel runway, which was named 36Left —18Right to designate compass points of 360 degrees and 180 degrees, is being renamed to 1Left — 19Right, to indicate 10 degrees and 190 degrees, since the runway designations are separated into 10-degree increments.

Adjustments to runways like this and to navigational aids are ongoing, according to Kathleen Bergen, a spokeswoman for the Federal Aviation Administration's Southern Region. A third airport is scheduled to rename its runways in October; however, the changes aren't necessary for all airports in the Tampa Bay area, she said.

A similar change was required in Stansted Airport in England in 2009.

As others have noted, Runway naming is mostly based on local magnetic north (not on the direction of any north pole).

Runways are named by a number between 01 and 36, which is generally one tenth of the magnetic azimuth of the runway's heading in degrees: a runway numbered 09 points east (90°), runway 18 is south (180°), runway 27 points west (270°) and runway 36 points to the north (360° rather than 0°).[1] When taking off from or landing on runway 09, a plane would be heading 90° (east). However, runways in North America that lie within the Northern Domestic Airspace of Canada are numbered relative to true north because proximity to the magnetic North Pole makes the magnetic declination large.

My emphasis. Ref (via Wikipedia)

A sidenote on declination:

Note this definition deliberately does not mention the magnetic north pole - it's location and wanderings are irrelevant. It's the direction a nearby magnetised needle points that is important (and it mostly doesn't point towards any magnetic north pole - of which the earth sometimes has several).

At all major U.S. airports, the runways are labelled based on magnetic north, not true north. Only in the Northern Domestic Airspace of Canada are runways numbered based on True North (Transport Canada Aeronautical Information Manual, at p. 189).

So, most runways are numbered based on their magnetic heading (rounded to the nearest 10), and magnetic north does shift. 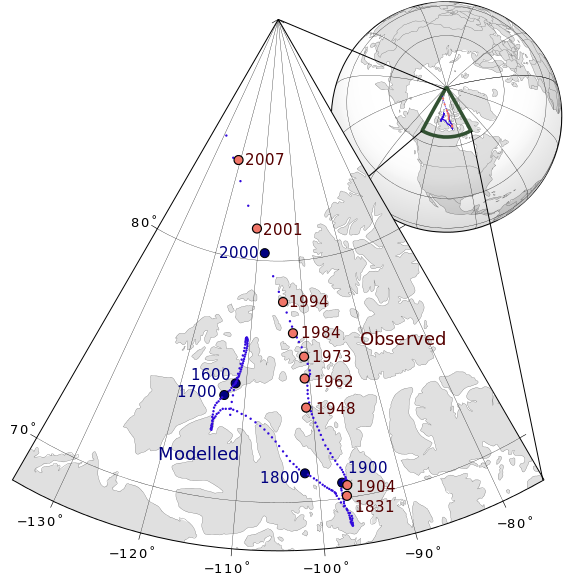 For instance, Runway 34 at YYC is numbered 34 because it lines up with 340 degrees magnetic and because the magnetic north pole is slowly moving (this movement is part of the earth's natural process), every 60 or 70 years runways have to be given new designations.

True north also moves (http://en.wikipedia.org/wiki/Polar_motion). It has shifted about 20m since 1900. This is not enough to trigger airport runway renumbering, even in Canada's Northern Domestic Airspace.

Not the answer you're looking for? Browse other questions tagged aviation geology earth magnets .