I have seen this story a couple of times in my facebook newsfeed and it strikes me as highly unlikely. The story goes:

Below is a Science fair project presented by a girl in a secondary school in Sussex. In it she took filtered water and divided it into two parts.

Then after cooling she used the water to water two identical plants to see if there would be any difference in the growth between the normal boiled water and the water boiled in a microwave.

She was thinking that the structure or energy of the water may be compromised by microwave.

As it turned out, even she was amazed at the difference, after the experiment which was repeated by her class mates a number of times and had the same result. 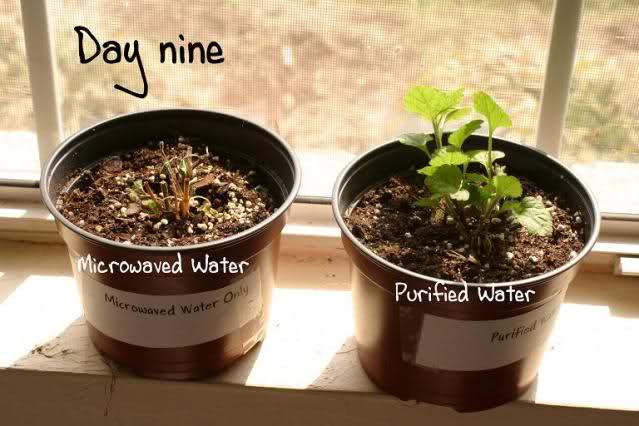 So does microwaved water kill plants?

(Bonus points for confirming/debunking any other statements in the original article. Please cite sources of evidence.)

"She was thinking that the structure or energy of the water may be compromised by microwave."

This was debunked by snopes.com.

Nonionising radiation has enough energy to move things around inside a cell but not enough to change cells chemically. The radiation from a microwave oven is nonionising.

Nonionising radiation is found at the long wavelength end of the spectrum and may have enough energy to excite molecules and atoms causing then to vibrate faster. This is very obvious in a microwave oven where the radiation causes water molecules to vibrate faster creating heat.

Skeptical analysis of the experiment

This was not a useful experiment. Using a sample size of 1 for each population is akin to the fallacy of using anecdotal evidence. This is just one instance in which one plant died and another lived. The dead plant could have had poor genes, an infestation, poor soil quality, among other things. The container they were using for the microwave water could have been contaminated with something, or used for other purposes in between waterings.

The description of the experimental method, especially the measures they took to avoid causing a difference between the two populations is extremely lacking.

The experiment which was repeated by her classmates a number of times and had the same result.

How many times? Two? Three? 300? Without more detail, this is just hearsay. And again, the story fails to describe the measures taken to prevent other causes of differences between the two populations.

Not the answer you're looking for? Browse other questions tagged microwaves .