Are the 3 World Trade Center towers the only steel-framed high-rises to collapse due to fire?

Since the events of 9-11 it has been claimed several times that no other skyscraper in history has ever collapsed from fire damage. It's usually used as a part of the argument that fire alone cannot bring down a steel-frames building.

Excepting the three 9-11 collapses, no fire, however severe, has ever caused a steel-framed high-rise building to collapse.

ae911truth.org has a list of other building that did not collapse and uses it as evidence to claim that:

...the Twin Towers and WTC Building 7, the only steel framed skyscrapers in history, whose… complete collapses have been officially blamed on fire

and to further claim:

overwhelming scientific, forensic, and eyewitness evidence that proves the WTC skyscrapers were not destroyed by fire

Other than the World Trade Center buildings, has fire alone ever caused a steel skyscraper to collapse?

There's a list of buildings which have collapsed due to fire here: Historical Survey of Multi-Story Building Collapses Due to Fire. Scanning this document, to include only building which are made of steel (and not e.g. reinforced concrete), shows only two:

Photographs of structural steel deformed by fire are shown on page 3 of The Reinstatement of Fire Damaged Steel and Iron Framed Structures.

Steel loses strength when it's heated, and eventually fails, which is why it needs protection.

What about the WTC specifically?

There are two explanations of how/why fire caused the WTC collapse here:

The latter reference contains an explanation for the collapse (in the side-bar, on the right):

First, in the absence of structural and insulation damage, a conventional fire substantially similar to or less intense than the fires encountered on September 11, 2001 likely would not have led to the collapse of a WTC tower. Second, the towers likely would not have collapsed under the combined effects of aircraft impact and the subsequent multi-floor fires encountered on September 11, 2001 if the insulation had not been widely dislodged or had been only minimally dislodged by aircraft impact.

It also says that they found no other causes:

Also, the investigation team neither found nor invoked any extraordinary events, beyond the terrorist attack that damaged the structure and removed the insulation, that led to the collapse of the towers.

The above (aircraft impact dislodging insulation) doesn't explain the collapse of Building 7. The analysis of the Building 7 collapse states that the failure of this building was more caused thermal expansion (steel changing size and shape): its fire-insulation wasn't affected by an airplane crash, but it failed in the 300°C-450°C temperature range, before it got hot enough (e.g. 650°C) for the steel to lose significant strength:

In the WTC 7 collapse, the loss of steel strength or stiffness was not as important as the thermal expansion of steel structures caused by heat.

There are various ways in which the WTC buildings and the WTC fire were famously unusual or unique.

The authorities learn from disasters and update the building codes and fire codes accordingly: perhaps that's another explanation for why we may not see an event quite this like one again.

The Plasco Building in Tehran 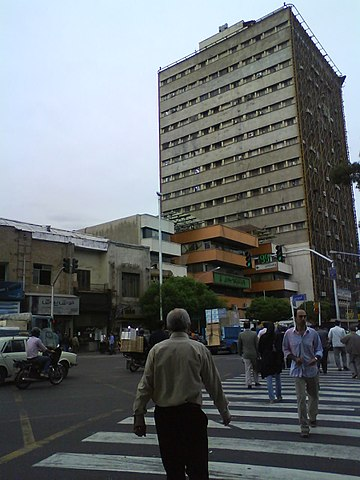 The Windsor Tower in Madrid 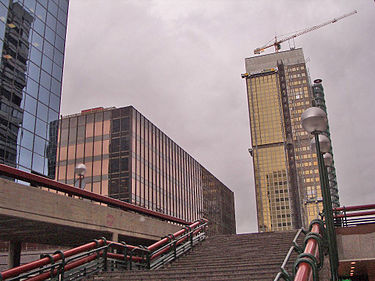 This was a 29 storey building with outer steel columns and a concrete core. A strong mechanical floor was at the 17th storey. 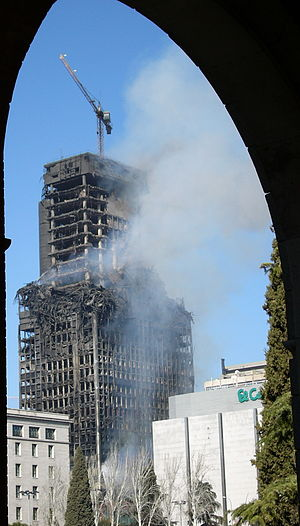 Not the answer you're looking for? Browse other questions tagged 9-11 fire architecture .

33
Was the BBC report of the WTC-7 falling before it happened a scripted event?
18
Was the date for the 9/11 attack chosen to be the same as the emergency number in the U.S. (911)?
67
Did planes crash into the WTC on 9-11?
7
Did Kai Kostack provide an accurate representation of the NIST simulation of the 7 World Trade Center building collapse?
12
In 2017, was the Plasco Building destroyed in a controlled demolition?