Were two ballistic missiles fired from Spain towards Syria?

The Lebanese news sitem Almanar News cites an anonymous source claiming that two missiles were fired by US forces in Spain towards Syria. They were detected by Russia, it sparked an international incident, so one was exploded in mid-air and the other was "diverted towards the sea" (presumably the Mediterranean sea)

I am skeptical of this.

The US has two military bases in Spain: 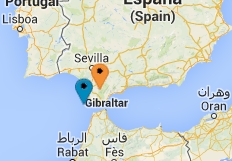 The closest distance between these military bases in Spain and Syria is about 4,000 km.

The ballistic missiles are quite loud when they are fired. Check this video.

So, how could such loud launch, from Andalusia in Spain or near Gibraltar, have been unnoticed given there are a lot of people living in south of Spain and a lot of airports with radars.

Are the claims made in the article possible?

Hard to get sources, but some common sense comes to mind as a good way to reason about this:

Ergo, the only conclusion I can draw from what data I have and know from past study of such systems (a lot of it from printed books) is that no such ballistic missile with the capabilities implied exists in the US arsenal, and that any launch of such if it existed would have been very rapidly detected and responded to by the Russians and possibly others.

As to it being an Israeli missile, Yahoo news shows a map of one being fired over what looks like the Adriatic and dated 03 September. So not from Spain at all (and the timing might also be wrong, I don't know the supposed launch date from the Libyan claim).
The Jeruzalem post confirms and details what was launched and tested, but doesn't mention the capabilities (range, speed, etc.) of the missile.
This article lists the size and has a decent photograph of the Sparrow ballistc missile decoy, which from the looks of it doesn't seem like it has anything near 4000km range (and the map shown by Yahoo seems to indicate more like several hundred km).
Even if you don't believe any of those sources, you might be more inclined to believe Al Jazeera, not exactly a friend of Israel, who don't question the launch.
A major problem finding any data on this vehicle is the fact that its name is identical to an old and very common US air to air missile, so any search comes up with thousands of hits about that one (and in fact many news stories about the 03 September launch mistakenly include photographs of that one).

Not the answer you're looking for? Browse other questions tagged united-states military physics spain .

1
Is it possible for Armavir to see ballistic missile over Mediterranean (how high was it)?

37
Were there only two cars in Ohio in 1895, and they managed to crash into each other?
22
Was Russian Su-24 fighter able to disable electronics aboard USS Donald Cook and thus lead to personnel aboard the ship to resign?
8
Were Abraham Lincoln and John F. Kennedy the only two presidents who ever attempted to end the Federal Reserve Banking Cartel?
17
Was there a law ever passed that prevented two trains from proceeding at a crossing?
7
How many non-citizens were removed from the US from 2009--2015?
3
Did North Korea shoot two missiles over Japan?
5
Were some Russians killed in a fight with American forces in Syria in February 2018?