This one comes from my 7-year-old. So, do all monkeys go bananas for bananas? Some types of monkeys? Do all monkeys like bananas somehow?

...or is it just a cartoon convention with no basis in reality?

Jane was very discouraged and depressed after only a few weeks at Gombe. The chimps would not let her within 50 yards of them, and she had observed very little. Jane was getting discouraged about the project. She had never done research with animals, and the chimpanzees were certainly not cooperating with her.
[...] One day, a large male chimp wandered into the camp. He eyed the tent from a nearby tree. Suddenly, he began stomping and screaming, as though he felt threatened. Jane soon realized the chimpanzee was eyeing a banana on the table just inside the tent. This would be Jane's chance to get close to the chimps. From that day on, bananas were kept near by for any curious chimps.
Jane eventually grew very close to the chimps at Gombe. They would soon allow her to follow them, as they led the way.

This gave birth to “Banana Club”, it is what she calls her methodology, a feeding method which bonded her even closer to them, and her observations became more fruitful.

You can buy 1,000kgs of Bananas for the Jane Goodall Institute 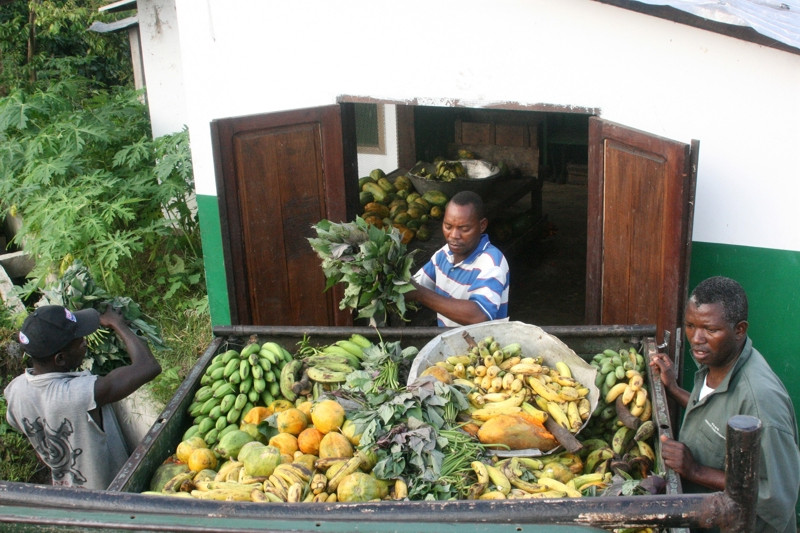 (Image caption: "Delivery of 1000kg of Bananas and other fruit"; image copied from the link above).

Bananas gave Jane an edge. A steady supply lured chimps and enabled her to gain their trust. David Greybeard (right), who once ate about 50 bananas in a sitting, was the first Gombe chimp to lose his fear of human contact.

Of course Jan Goodall isn't the only one to document this.

Clinical Veterinarian Susan Fussell greets a distraught Danial, who had been chained to a freezer for over a year. A week later, happiness is lots of bananas for Daniel who is now at the Sanaga-Yong Chimpanzee Rescue Center in Cameroon.

Wheelbarrow loads of fruit are taken to enclosures, a plastic container drummed to herald the arrival of breakfast. The chimps are frantic for the bananas, oranges and guavas. The Cameroonian staff and volunteers can identify each of the 64 chimps and ensure that each receives its share. Next the vitamins and finally the medications are given.

Chimpanzees aren't the only apes who like bananas: for example here is a Toutube video showing an orangutan putting 10 bananas in his mouth at once. (I think that's to carry them somewhere to eat later: monkeys carry things in their mouths: they don't have shopping bags or clothes with pockets, and put their hands on the ground when they walk).

However monkeys don't only eat bananas. The "A huge menu" section of the San Diego Zoo web site page about monkeys says,

Prehensile tails come in handy for holding on while the monkey collects food: flowers, fruits, nuts, leaves, seeds, insects, birds’ eggs, spiders, and small mammals. Old World monkeys fill up their large cheek pouches with fruits, leaves, and insects as they forage during the day, stopping to chew and swallow their food when they find a safe spot to rest. Baboons are also known to eat meat when they can catch it, including young antelope, rabbits, and birds like guinea fowl.

Leaves are the food of choice for some monkey species. Colobus monkeys and langurs have chambered stomachs that carry bacteria, which help ferment and digest leaves. Geladas prefer to graze on grass!

Also the kinds of banana which they at are not the same as ours. We eat Canvendish bananas:

Cavendish bananas accounted for 47% of global banana production between 1998 and 2000, and the vast majority of bananas entering international trade.

Cavendish bananas are an artificial cultivar which is grown from clones and (because it so rarely has any seeds) does not exist in the wild. MSN's article Is it time to say 'bye-bye' to the banana? says,

Since bananas are not propagated from seeds, but instead from identical clone plants called "pups," there is no way to reverse the swath of disease spreading across banana plantations around the world.

EAZA is a group which publishes nutrition information for zoos. Their article titled Fruits as foods – common misconceptions about frugivory says,

Primate species known or thought to be mainly or partly frugivorous in the wild are usually provided with a fruit-based diet in captivity. However, cultivated fruits as available on European markets are grown for human consumption and have been selectively bred for high sugar and low fibre content. They may thus not be representative of wild fruits. In this paper we compared the nutritional characteristics of fruits consumed by primates in the wild to those of such fruits that are commonly used in diets for captive primates in European zoos.
[...]Overall, fruits consumed by wild primates are more comparable in their nutrient composition to vegetables used in zoo diets. We therefore recommend not to simply translate a frugivorous nutritional strategy of a species in the wild to a captive diet for that species that mainly consists of fleshy fruits, but to look at nutrient composition and try to mimic this as closely as possible in order to avoid diet-related problems such as obesity.

This suggests that wild bananas are more like vegetables.

@ChrisW's answer, which shows that chimpanzees love bananas and orangutans like bananas is an excellent answer... but only if you accept the common usage of "monkey" to include the chimpanzee and orangutan.

Chris clearly stated that that assumption was being made, and that's probably an acceptable assumption - the general meme of "monkeys love bananas" extends to chimpanzees and orangutans.

However, chimpanzees and orangutans are not monkeys, they are apes.

So, do true monkeys truly love bananas above all else? i.e. not, merely will they eat them, but do they prefer them over other foods?

In 1935, Dr Rosa Katz and her husband Professor David Katz decided to find out.

They offered seven different foods on a dish to each of three green monkeys and three Capuchin monkeys, and watched what order they ate the items. They did this repeatedly over several days, to make sure it wasn't just a mood thing.

Each monkey always ate them in the same order, and all the monkeys ate them in a very similar order to each other - even across the species.

So, sure, these two species of monkeys do like bananas, but they love grapes more!

(A couple of chimpanzees were also offered similar diets. Both were big fans of the grapes as their first choice, but one preferred apple to bananas.)

Not the answer you're looking for? Browse other questions tagged zoology .

55
Can cats survive a fall from any height?
7
Do Americans spend 49 billion dollars a year on pets?
29
Does the carrot on a stick method work on a mule?
7
Did lions in Ethiopia save a 12 year old girl from rape?
22
Do apes/monkeys open bananas from the floral end?
18
Do elephants see humans the same way humans see puppies?
11
Do European deer still stick to their sides of the Iron Curtain?
7
Did a group of monkeys steal SARS-CoV-2 positive blood samples from a health care worker in India?