Does Germany want their gold back?

There is a meme that is going around that states:

The German government has been storing about half of its gold supply with the US FED, apparently in the NYC FED vaults. Germany decided to bring home all its gold, but the FED has said that isn’t possible to do, and it would need until 2020 to be able to accomplish the transfer.

The German government then asked to visit the FED vaults to inventory the gold and determine its actual existence, but the FED refused to permit Germany to examine its own gold. The reasons given were “security” and “no room for visitors”. And nothing else.

The "news" article is posted with out any credible sources. So my question is:

Does Germany actually store ~50% of its physical gold reserves in the US Federal Reserve? Yes

Has Germany requested that the US Return the Gold it has entrusted the the US Federal Reserve? Yes, but only part of it, and all the gold they store in Paris

Has Germany requested an audit of the actual gold in the reserves? Has the US refused the Audit Request? Yes and yes

Will the transfer only finish at 2020? Yes

The startling news that Germany is repatriating its gold reserves from the United States and France has got precious metals speculators worried that this is the first major sign that trust between central banks across the globe could be deteriorating.

Still, it is momentous that the New York Fed has the largest known depositary of monetary gold– some 23% of the globe’s gold bars, including half the hoard of the Netherlands and considerable holdings from other nations. Germany will feel a lot more secure counting its own gold bards, rather than depending on an audit from the central banks of France and the U.S. Mark it down as the strongest European power flexing its perfect right– and setting off a wave of speculation. Are foreign gold reserves safe in New York- or could they be expropriated? Very doubtful. Could the the New York Fed be lending out gold bars as security for sovereign loans? I reckon that’s illegal.

Bundesbank announced last week that they’ll repatriate 674 metric tons of their total 3,391 metric tonne gold reserves from vaults in Paris and New York to restore public confidence in the safety of Germany’s gold reserves. The transfer from the Federal Reserve is set to take place slowly over a seven year period and will only be completed in 2020. 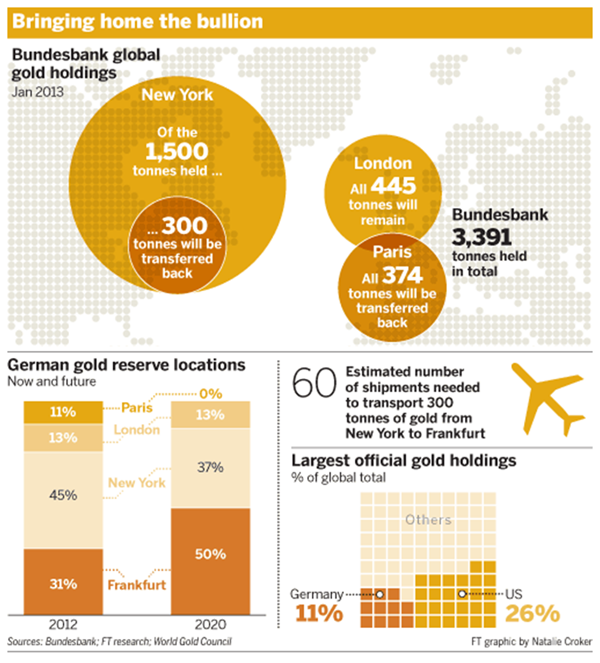 You can see that currently 45% of Germany's gold is stored in New York, and ~20% of it will be moved to Germany. Also, at the end of the process Germany will be holding 50% of its own gold.

The financial world was shocked this month by a demand from Germany’s Bundesbank to repatriate a large portion of its gold reserves held abroad. By 2020, Germany wants 50% of its total gold reserves back in Frankfurt – including 300 tons from the Federal Reserve. The Bundesbank’s announcement comes just three months after the Fed refused to submit to an audit of its holdings on Germany’s behalf. One cannot help but wonder if the refusal triggered the demand.

For decades, almost half of Germany's gold has been stored deep below the Federal Reserve Bank of New York. Now, with the euro crisis swirling, German politicians are asking their central bankers to take stock of the reserves. Some even say that the gold should be shipped home.

Not the answer you're looking for? Browse other questions tagged politics economics .

36
Is there a gold stockpile at "Fort Knox"?
28
Was pepper once worth its weight in gold?
9
Did goldsmiths invent fractional reserve banking?
123
Did Germany produce so much renewable electricity on May 8th 2016 that their power prices went negative?
3
How much does the White House pay to their employees?