Would Elon Musk's Hyperloop be cheaper than high speed rail?

tl;dr: No, it is not cheaper. The unit cost of the Hyperloop is higher.

And to understand why, we need to take a step back, and think about what the proposed infrastructure is for.

It is for moving people about.

So the costs can only make sense, if we bear in mind how many people will be moved.

So although the capital costs are about one-tenth of the costs of high-speed rail, the ridership would be much less than one-tenth of the high-speed train. So the unit costs of the Hyperloop are higher. Essentially, the nub of it comes down to the Hyperloop being super-fast low-capacity infrastructure; the train is fast higher-capacity infrastructure.

Now, there's a lot of assumptions in those calculations: the high-speed train works on the basis of trains every 5 minutes, but they could be more frequent. The hyperloop claims to be able to work at 30-second intervals at peak, but given the speeds and stopping times, that looks completely unrealistic. But one could tweak the numbers to make the Hyperloop look better, at a cost per passenger basis. However, the world has quite a lot of experience of building and operating high-speed trains. It has very little experience of bulding and runnning anything like the Hyperloop. Therefore, cost overruns are much more probable, and more likely to be much higher, for the Hyperloop than for the train.

My personal suspicion is that those two numbers compare apples with oranges, and if that is so it would make a fine answer.

As shown in exhibit 3-2 on page 3-7, the largest cost is viaducts and tunnels: 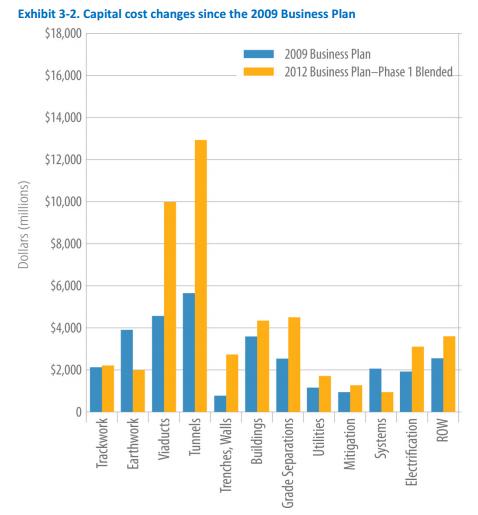 The Route optimization (pages 40 and 41) of SpaceX's PDF says,

The proposed route considers a combination of 20, 50, and 100 ft (6, 15, and 30 m, respectively) pylon heights to raise and lower the Hyperloop tube over geographical obstacles. A total tunnel length of 15.2 miles (24.5 km) has been included in this optimization where extreme local gradients (>6%) would preclude the use of pylons. Tunneling cost estimations are estimated at $50 million per mile ($31 million per km). The small diameter of the Hyperloop tube should keep tunneling costs to a far more reasonable level than traditional automotive and rail tunnels.

Another difference is the complexity of the network: the SpaceX proposal is high-speed point-to-point; in contrast, the railway document says,

The new development landscape has necessitated adding many miles of elevated structures, tunnels, and other infrastructure. The new designs permit access to major downtown population centers with reduced community impacts and disruption. Approximately 30 to 36 percent of the Phase 1 Blended system may be built on elevated structure or in tunnels, depending on alignment alternatives. The possible length of elevated structures increased from 77 miles in 2009 to between 113 and 140 miles, and tunnels increased from 32 miles to between 44 and 48 miles(with the ranges based on different alternatives still under consideration).

After the track, the next biggest cost of the rail proposal seems to be land-related: 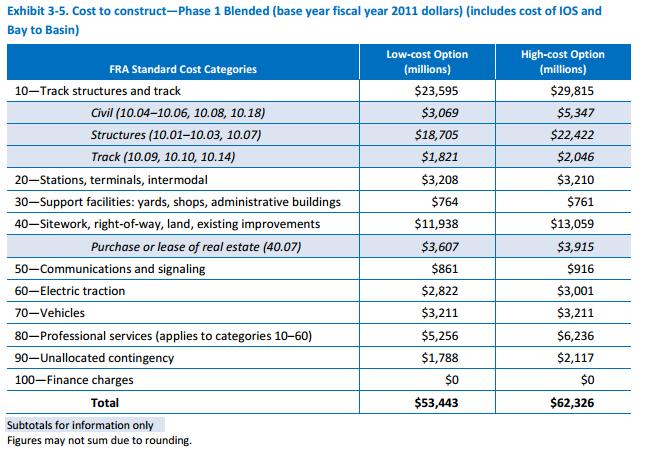 A analogous section of the Hyperloop document (titled "Making the Economics Work" on pages 4 and 5) says,

The key advantages of a tube vs. a railway track are that it can be built above the ground on pylons and it can be built in prefabricated sections that are dropped in place and joined with an orbital seam welder. By building it on pylons, you can almost entirely avoid the need to buy land by following alongside the mostly very straight California Interstate 5 highway, with only minor deviations when the highway makes a sharp turn.

Even when the Hyperloop path deviates from the highway, it will cause minimal disruption to farmland roughly comparable to a tree or telephone pole, which farmers deal with all the time. A ground based high speed rail system by comparison needs up to a 100 ft wide swath of dedicated land to build up foundations for both directions, forcing people to travel for several miles just to get to the other side of their property. It is also noisy, with nothing to contain the sound, and needs unsightly protective fencing to prevent animals, people or vehicles from getting on to the track. Risk of derailment is also not to be taken lightly, as demonstrated by several recent fatal train accidents.

For what it's worth, one critic says ...

Musk’s paper does an excellent job of detailing exact pricing of each element of the project so that there’s no magical thinking involved in the pricing expectations.

... and then goes on the criticize other aspects of the project's feasibility, i.e. heat (from compressing the air), and wind shear on the elevated tube.

By definition it is difficult to predict unexpected cost overruns.

Some people (e.g. the conclusion to EnergyNumbers's answer) predict overruns because it is novel technology.

The expected cost are shown on pages 55 and 56 of the SpaceX PDF.

10% of the total projected cost is for the capsule, and 90% is for the tube (so perhaps even large overruns on the capsule side may be relatively insignificant).

The projected cost for the tube breaks down as follows:

Building things such as concrete pylons ("Due to the sheer quantity of pillars required, reinforced concrete was selected as the construction material due to its very low cost per volume"), drilling tunnels, and buying lands and permits, are all fairly well-known technologies.

One of the risks is that Elon himself will not be involved in the project: I would guess this project needs good management including risk mitigation strategies.

Not the answer you're looking for? Browse other questions tagged hyperloop .