Can some simple, old models of the effect of CO₂ predict temperature better than complex modern climate simulations?

A recent post on the climate skeptic blog climateaudit.org showed some comparisons of the relationship between world temperature and CO2 over the 20th century from a simple model originally published in the 1930s and a recent complex model from the UK Met Office. The simple model seemed to do a better job of predicting temperature given the CO2 level.

The comparison chart is shown below: 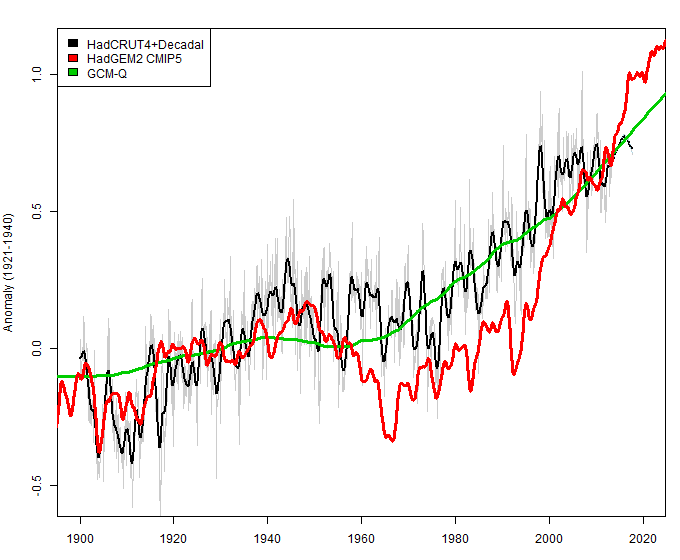 Climateaudit then compared the results from many other models using a measure of predictive skill and concluded:

In addition to calculating the skill score of HadGEM2, I also calculated skill scores for the 12 CMIP5 RCP4.5 averages on file at KNMI. ... Remarkably, none of the 12 CMIP5 have any “skill” in reconstructing GLB temperature relative to the simple GCM-Q formula. Indeed, 10 of 12 do dramatically worse....

Note that this comparison is not being used here to deny climate change: the simple model predicts significant warming in the world climate (though with a lower sensitivity than typical modern models). The issue is whether complicated models of climate change do a better job than simple models.

So, is climateaudit right? Are, as many (non-climate) modellers might intuit, simple models better than complex ones in predicting average climate?

To begin with, the question ought to be reworded as "Can simple, old models of the effect of CO₂ predict global mean surface temperature better than complex modern climate simulations?". GMSTs can be modelled quite well by comparatively simple models of global climate, using physics that has been well understood for many years (see the primers by Pierrehumbert and McGuffie and Henderson-Sellers). The reason that climatologists use GCMs rather than these simple climate models is GCMs can model regional climate, so that for instance we can project the effect of increasing GHGs on Europe, or Australasia or the Arctic. The simple climate models cannot do this as they have no concept of the spatial element of climate. So even if simple, old models can provide a better prediction of observed GMSTs, that doesn't mean that they are more useful than GCMs, as they don't provide the level of spatial detail necessary.

The next important part is that there is a big difference between the questions "Can simple, old models ... ?" and "Do simple, old models ... ?" Callendars simple, old model is only one of many, there were others with higher climate sensitivity than Callendars (there is a nice compilation of classic papers on climate edited by Archer and Pierrehumbert). For instance, Gilbert Plass suggested a climate sensitivity of 3.6ºC per doubling of CO2. Had ClimateAudit used that figure instead of Callendar's more modest 1.67 deg, I suspect that the GCM-Q model would have shown much more warming than from HadGEM2 and the conclusion would have been the exact opposite. 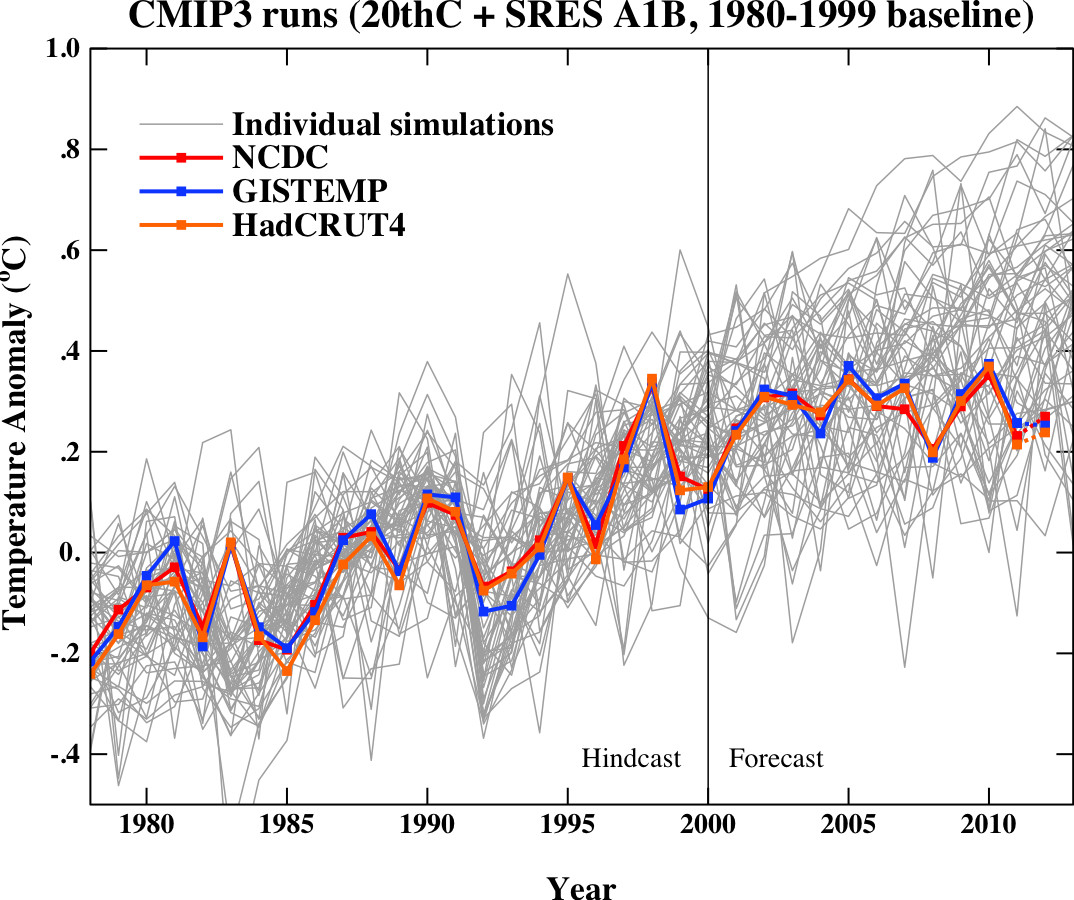 Edit: Found a corresponding figure for the 20th century. Note the spread of the model runs (which is our best estimate of the plausible variability due to the unforced response) is pretty broad. There is no good reason to expect the observed climate to lie any closer to the modern GCM ensemble mean (or indeed GCM-Q) than that. 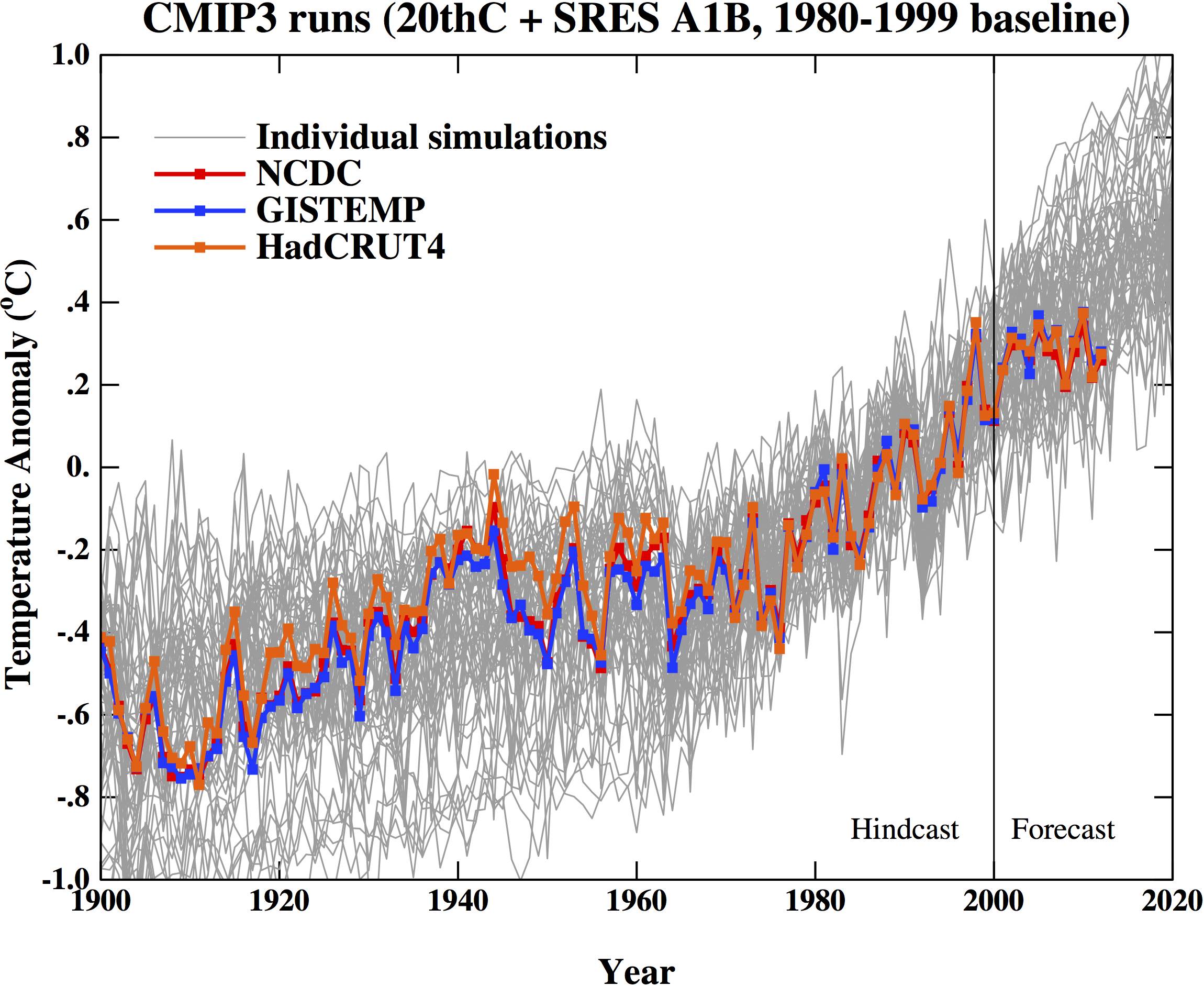 So all in all, there is nothing really surprising here, at least not to anyone familiar with the operation of climate models and aware of the existence of other "old, simple models" (on this case estimates of climate sensitivity) that could equally have been discussed, but which were not.

Not the answer you're looking for? Browse other questions tagged climate-change modelling .

1
Does global warming even exist?

9
Does climate change mean that weather becomes more variable in addition to being warmer?
13
Are the IPCC climate change models overestimating sensitivity to carbon dioxide?
31
Does this graph show climate-change predictions don't meet observations?
9
Did the IPCC obfuscate the evidence in a way that obscures the discrepancy between previous climate models and recent observations?
3
Why did the value for "average surface temperature of Earth" change from 15°C to 14°C in some scientific literature concerning climate change?