Lately I've been thrilled by the interesting phenomenon of sliding stones (also known as sailing stones). 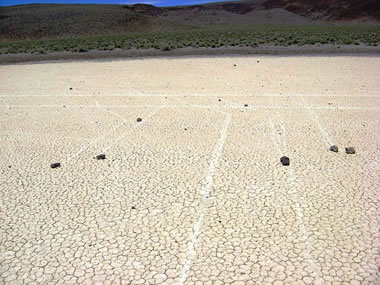 The stones move only every two or three years and most tracks develop over three or four years. Stones with rough bottoms leave straight striated tracks while those with smooth bottoms tend to wander. Stones sometimes turn over, exposing another edge to the ground and leaving a different track in the stone's wake

There are several theories that explain how does this happen. Supposedly even the NASA has researched this. The most accepted theory says:

A few people have reported seeing Racetrack Playa covered by a thin layer of ice. One idea is that water freezes around the rocks and then wind, blowing across the top of the ice, drags the ice sheet with its embedded rocks across the surface of the playa.

However there are records of rocks up to 700 pounds (300 kg)! I find this very hard to believe. There are some tracks that records that show 90 degree turns which also seems very unlikely to be due to wind movement.

Has this phenomenon been reproduced to show wind could move a rock in these patterns?

In (Lorenz 2011), they argue that yes, a combination of wind and ice can account for the movement of the rocks in the Racetrack Playa.

They review the physical mechanics of rock movement, and calculate the necessary wind speeds to move rocks of varying sizes, with varying sizes of ice rafts.

They also demonstrate the plausibility of this mechanism with a tabletop experiment.

They review other examples of bouyant rocks. For example:

Sainsbury noted tracks in sediments of the Thorne River Delta at Wales Island, Alaska. Here, the rocks, which are up to 1 kg, were rafted not by ice, but by kelp, which has air sacs that allow the seaweed to float (presumably an evolutionary adaptation to facilitate dispersion by wind). He noted that the trails were roughly at right angles to the tidal currents, suggesting that force due to wind was the likely cause of motion. Although the source of buoyancy and the appearance is different from the playa, the physics is fundamentally the same.

With the caveat that no single set of criteria may define the conditions under which all rocks may move (that is, although ice facilitates their motion, motion may sometimes occur in its absence), we have argued that ice rafting provides a mechanism that requires only circumstances at the playa that have been observed to occur, both there and elsewhere, and allows motion to be driven by modest winds. This mechanism avoids the problem that the exceptional winds or large ice sails, which would otherwise be required, would lead to effects that are not observed.

So, they don't claim that their argument applies to all rocks on the playa (for example, the 700lb rock you mention in the question).

Norris et al. (Norris 2014) report the first observations of this wind-and-ice effect. The observations happened in December 2013 and January 2014.

A time-lapse video of one of the rocks in motion is here: 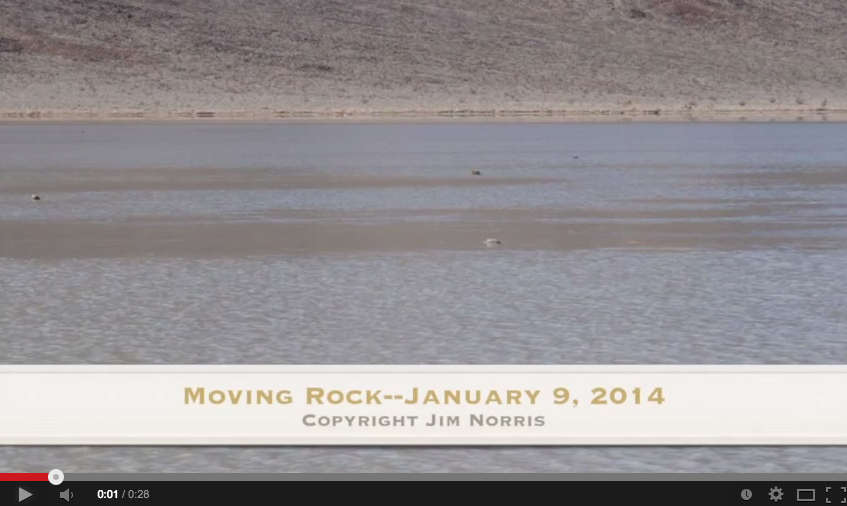 A necessary condition for the rock motion we observed is the existence of a playa pool deep enough to submerge the southern section of the playa, yet shallow enough to leave many rocks partly exposed at the pond surface. Other repeating features of rock movement events that we observed include the presence of floating ice, temperatures and sunlight sufficient to create melt pools in the ice, and light breezes that are steady enough to drive floating ice. Although the ice breaks up around rocks, even thin moving ice sheets can generate sufficient force to drive rocks across the pool.

The heaviest rock that Norris et al. instrumented with GPS was 16.6 kg, and they observed many more without recording their weight. However, I have not found any evidence that a 700lb rock was moved this way. They did not report observations of stones this heavy being moved this way, nor did they speculate about the maximum mass that could be moved by the wind and ice method.

During the original 7-year observation of Sharp and Carey (Sharp and Carey 1976), the most massive stone that moved was 25.4 kg. The 320 kg stone was an outlier, and the only the only rock that they catalogued that was greater than 25.4 kg.

It lay at the north end of a nearly straight track bearing N20°W and extending 174 m directly outward from a point within 25 ft of the southshore. (Sharp and Carey 1976)

Its position on the playa never changed.

The question claims that "there are records of rocks up to 700 pounds (300 kg)". Based on my research, that is better stated as "there is record of one rock that was 320 kg, and no record of it moving".

Not the answer you're looking for? Browse other questions tagged geology .