Are 42% of human deaths worldwide from abortion?

Lately, social media has been flooded with all sorts of "facts" about abortion. This one in particular caught my attention: 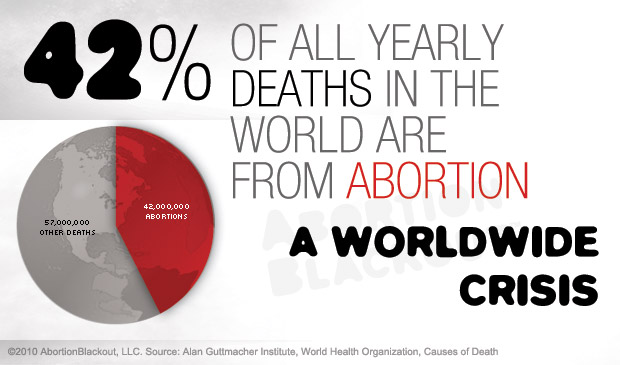 42% of yearly deaths in the world are from abortion

I don't want this to degrade into an argument about what "death" is, so for the sake of the clarity assume abortion is death.

Is this statistic correct?

No, the picture is not accurate. No, “42% of yearly deaths in the world” are not from abortion.

As Avi’s answer shows, the raw numbers are about right, albeit with a big uncertainty attached.

This is inaccurate. There is at least one additional factor:

As many as 50% of all pregnancies are miscarried before coming to full term – most (about 60%) due to chromosomal aberrations. If we count pre-birth deaths in our statistic, then we also need to count those miscarriages.

If we add the numbers, we find that abortions account for 20% yearly deaths in the world, not 42% as claimed (and this isn’t even accounting for the fact that of those 20%, some would have miscarried anyway).

Of course this is assuming that we count prenatal deaths as “deaths” at all, and as can be seen from the statistics on mortality rate, this is not normally done. The most we can honestly say is that “there are 0.72 as many abortions as there are (postnatal) deaths (= 72%)”. But presenting these 42% as part of the overall deaths is wrong, as I’ve shown above. In statistics, presentation matters.

(The numbers differ slightly from those in Avi’s answer since I’m using the “42%” number from the question to calculate abortions but the principle doesn’t change.)

The global death rate was 7.99 per thousand people per year. The world population is about 7.1 billion people. This means that about 56 million people die a year, excluding abortions. This approximately aligns with the estimate for the number of postnatal deaths in the image.

The Guttmacher Institute estimates that there were 43.8 million abortions in 2008. This data is a little older than the rest, but it's what I could find. assuming the same number of deaths in 2008 as in 2012, That means that abortions comprise about 43% of all deaths (if we define death to include abortions).

If we define deaths to include abortions (but to not include miscarriages), this image is approximately accurate as far as I can tell.

The numbers are correct. The definitions, and thus the argument, are not.

As in both Avi's and Konrad's answers, the number of postnatal deaths and the number of abortions in this poster are correct, given the latest information on world population, mortality rate, and number of abortions. However, they were arrived at by ignoring the fact that the mortality rate, which is the number per hundred of deaths as defined by the WHO, does not include abortions, because an abortion is not a "death". It also, as both answers have said, does not include miscarriages, or the grey area of stillbirths (the definition varies by jurisdiction, with some measurements including them as miscarriages, others including them as postnatal mortalities, and still others differentiating them entirely).

These four results - live birth, stillbirth, miscarriage or abortion - are the only possibilities for an implanted egg and a viable pregnancy. I cannot find a worldwide stillbirth rate, but the U.S. rate is one in 115 pregnancies[1]. With the U.S. pregnancy rate at an average of 105.5 per 1,000 women (so 10.55% of women are pregnant at any given time)[2], if we extrapolate these out to the world female population of 3.402 billion[3], the number of stillbirths annually is 3,402,096,414 * .1055 * .008696 = 3.12 million. That is a very low estimate considering that both the U.S. pregnancy rate (due to economic factors both positive and negative) and stillbirth rate (due mainly to healthcare) are relatively low compared to the rest of the world. The annual number of miscarriages worldwide, borrowing from Konrad's answer, is 135.97 million.

For a fertilized egg, which for many pro-life advocates is where life begins, there is a fifth option; non-implantation, which is the case for up to one-half of all fertilized human eggs according to some estimates[4]. Given this estimate, the number of non-implantations annually can be as high as the total number of pregnancies itself.

If the U.S. pregnancy rate were extrapolated to the world female population, then over a nine-month period, there would be on the order of 358 million non-implantations of a fertilized egg, which would become nonviable (die) and the woman would continue her monthly cycle. Pushed out to the full year, that's 478.5 million women per year who, in the eyes of those for whom life begins at fertilization, are murderers.

Lastly, the OP's chart ignores medically-necessary abortions (because the position of most pro-life advocates is that there are no such situations, which is a position that is patently false given medical knowledge to date). A large contributor, though not the only one, is ectopic pregnancy (the egg implants in the fallopian tube instead of the uterine wall). That occurs at a rate of 19.7 per 1000 pregnancies[4], which if we extrapolate from the U.S. pregnancy rate of 10.55% of women and the total world female population of 3.4 billion, is 3402096414 * .1055 * .0197 ~= 7.1 million ectopic pregnancies annually worldwide (and likely more as the pregnancy rate I used is U.S.-specific and thought to be lower than the world average; unfortunately I can't find a good figure for overall world pregnancy rates). Ectopic pregnancies are 100% fatal for the embryo with or without treatment, and without medical treatment, a ruptured ectopic pregnancy is 100% fatal for the mother, so when an ectopic pregnancy is detected prior to rupture, the treatment is a drug-induced abortion using methotrexate, and if a rupture has occured, the fetus is removed as a natural consequence of repairing the damage. Either way, the insurance billing codes that document the medical procedures performed (and are the primary source of statistical data on such things) will include a code for a medical abortion.

This is not the only such indication for a "therapeutic" abortion. Toxcemia/eclampsia calls for immediate delivery of the baby as soon as the mother is stable, whether the baby would be expected to survive or not. Jurisdictions differ as to when such a delivery, resulting in the death of the baby, is a live birth and infant mortality (resulting in filing of a birth and death certificate for the baby), or an abortion by preterm induction (in which case neither a birth certificate nor a death certificate would be issued). Miscarriages, placental abruptions, and other complications of pregnancy often do not result in the woman's body naturally expelling the pregnancy; these situations require medical intervention to "evacuate the pregnancy", and are indistinguishable in terms of the procedure from a surgical abortion of a viable pregnancy and so would include nearly identical procedural codes.

94
Are 30% of human embryos "spontaneously aborted"?

16
Does a fetus feel pain during abortion in gestation week 12-18?
17
Are 10% of mental health problems caused by abortion?
16
Have fleas caused more human deaths from plague than wars?
13
Do abortion procedures ever result in live births?
9
Did banning abortion in Chile lead to lower maternal mortality?
15
Is 19% of Planned Parenthood's revenue from abortion?
32
Is this picture from an abortion clinic dumpster?