Life expectancy of girls born after 1970

Claims such as this about future life expectancy are based on the assumption that recent trends in increasing life expectancy continue. It is impossible to say for certain whether these trends will continue, and there is some evidence to suggest they won't.

The article Ageing populations: the challenges ahead published in The Lancet presents this forecast of life expectancy: 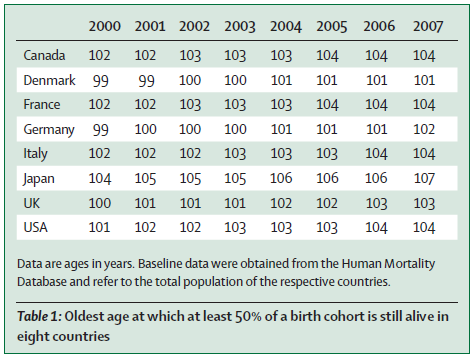 This forecast is based on the assumption that mortality before age 50 years will remain at 2006 levels. At age 50 years and older, probability of dying decreases by a rate that yields yearly improvements in period life expectancy of 0·2 years.

This response in The Lancet to the above article raises a number of objections:

Consider that published period life tables for Japanese women, the longest-lived population in the world, indicate that only 4·6% of the cohort born in 2000 are expected to live to 100 years. In the USA, this expectation is 2·0%. In other words, the 50% survival assertion by Christensen and colleagues is 11 times and 25 times greater than estimates for Japan or the USA, respectively, for the year 2000—implying that period mortality underestimates cohort life expectancy by decades.

Christensen and colleagues state that life expectancy is lengthening almost linearly in most developed countries, with no signs of deceleration. On the contrary, in England and Wales, Germany, the Netherlands, and the USA, life expectancy at age 65 years for women has converged to about 19·5 years, and has stagnated at that level in the USA and the Netherlands for most of the past 20 years.

Also, this article in The New England Journal of Medicine suggests that life expectancy may level off or even decline due to the effects of obesity.

From our analysis of the effect of obesity on longevity, we conclude that the steady rise in life expectancy during the past two centuries may soon come to an end.

The life expectancy in the United States at birth for females born between 1970 and 2007 is given in this report by the CDC.

In 1970, the life expectancy at birth for white females born in the United States was approximately 76 years. By 2007, that had increased to approximately 80 years.

In 1970, the life expectancy at birth for black females born in the United States was approximately 68 years. By 2007, that had increased to approximately 75 years.

Life expectancy is just an arithmetic mean, so it is mathematically possible that the actual survival distribution is such that the life expectancy is is in the 75-80 range, but 50% of the people will still live for more than 100 years.

By looking at what the survival curves actually look like: http://www.fis.org/public/survivalcurve-2020.html, I don't believe this is the case.

Not the answer you're looking for? Browse other questions tagged life-expectancy .