Was an argument over how many telegraph poles Germany needed to deliver cause to WW2?

I was reading a Batman comic where the Joker claimed: 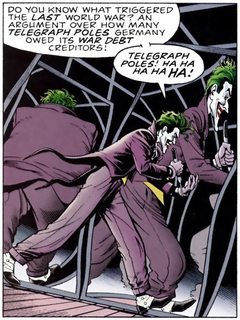 Do you know what triggered the last World War? An argument over how many telegraph poles Germany owed its war debt creditors!

This piqued my interest, and I looked it up to see if there was any truth to it.

It has been argued by some[by whom?] that it is a fallacy to consider the reparations as the primary source of the economic condition in Germany from 1919 to 1939. This perspective argues that Germany paid a small portion of the reparations and the hyper-inflation of the early 1920s was a result of the political and economic instability of the Weimar Republic. In fact, the occupation of the Ruhr by the French (which began when Germany failed to supply a required delivery of telegraph poles) did more damage to the economy than the reparations payments.

It's something of an oversimplification, but the short answer is this:

After World War I, the Allied forced imposed enormous reparations on Germany which virtually bankrupted the nation. In the early 1920s, a dispute over how many telegraph poles Germany owed France as part of the reparations ended with France militarily occupying part of western Germany, and killing over 100 German civilians for protesting against them.

Outrage over the killings and the damage done to Germany's economy greatly destabilized the German Republic (Weimar Republic). Hitler's initial popularity was almost entirely based on attacking the post-WW1 reparations as unfairly punitive (which was a fair point) and it is fair to say that political support for the Nazis and other nationalist factions was greatly increased by the Poincaré government's overreaction to Germany's refusal to give them more telegraph poles.

I haven't found any reliable source for or against it, can it even be considered in a away that the argument about telegraph poles was a cause for World War 2?

Active Oldest Votes
28
Want to improve this post? Add citations from reputable sources by editing the post. Posts with unsourced content may be edited or deleted.

No, it is not fair to say that "a missed telegraph pole delivery" was "what caused" World War II. Even if we are willing to give the Joker the benefit of doubt, that he meant "one of the causes", the impact of that one missed delivery is much less significant than The Joker, or the web articles you quoted, imply.

Poincare's decision to invade the Ruhr came at the end of a protracted, many-year battle with Germany over reparations, during which time Germany had defaulted repeatedly on their reparations. This problem was made worse for France by Britain's reluctance to enforce those reparations in the face of German inflation: Britain wanted France to reduce, or at least temporarily delay, those reparation payments, while France considered the issue non-negotiable.

France (and Belgium) had been arguing for the occupation of the Ruhr for much of 1922. One of the payments that Germany was supposed to be making regularly was timber deliveries; their default on one such payment gave the French government an excuse to invade. Poincare, by this point, was just looking for an excuse to force Germany to repay, so the actual event (the missed timber delivery) was almost incidental.

I have not seen anything to indicate what the undelivered timber was to be used for, though France was in the process of rebuilding their infrastructure from the war, and it's entirely possible that the shipment was either intended for, or consisted of, machined telegraph poles.

Additionally, (at least according to historian Gordon Martel) the invasion itself did not cause Germany's hyperinflation, which had started much earlier, and was mostly the reason why Germany defaulted in the first place. (German currency was so useless, France insisted on payment in real goods; those real goods were needed by Germany for its own industry, and without them, their currency just got worse.)

France also did not maintain its strong position over Germany for very long; France's currency tanked soon afterwards, Poincare subsequently lost power in 1924, and France withdrew in 1925. Poincare's successor was effectively bullied by the British and Americans into giving up much of their owed reparation payments, meaning that Germany arguably came out better after the invasion than they started out.

Germany, in fact, was in relatively good economic condition compared to France, since it suffered less damage from WWI. This is the main reason France was so reluctant to reduce their payments (with less rebuilding needed, France feared Germany would become the dominant European power before anyone else was strong enough to stop them -- which was almost true). German political opposition to the reparations, however, was very real, and existed long before the Ruhr occupation happened. Even if the occupation had never happened, and Germany had gotten its concessions in 1922 instead of 1924, there's no indication that the anti-reparations sentiment (which itself was just one small element of Hitler's rise to power) would have diminished at all.

At best, the occupation may have accelerated events that were already underway, but they certainly were not the cause.

I just noticed this bit from Wikipedia in the question:

In fact, the occupation of the Ruhr by the French ... did more damage to the economy than the reparations payments.

and realized I never addressed it in my answer, but it's addressed in the Martel book pretty well. The occupation of the Ruhr didn't do anything to the German economy per se. However, the German response to that occupation was to implement an official policy of "passive resistance", which included telling most of the factory workers in the area that they were no longer obligated to come to work (because their work would just be handed over to France). That decision did some serious damage to the German economy, and did lead to some anti-Weimar riots, an eventual change in government, and a state of emergency. This was happening during the time that Hitler serving his jail sentence and writing Mein Kampf, so he was undoubtedly influenced by those events. But, it was the actions of the democratic German government, more so than the French actions, that the right-wing parties were rallying against.

Not the answer you're looking for? Browse other questions tagged war world-war-ii .

11
Did Soviet soldiers commit two million rapes of German women in 1945?
14
Was the first German bombing of London an accident?