Did a Florida woman get 20 years jail for firing warning shots in the air?

In the wake of the recent Zimmerman trial, Shan Diddy (@shannycat81) posted a tweet that was retweeted over 7,000 times, including by noted skeptic, Paul Provenza.

Meanwhile, ALSO in Florida, a Black single mother gets 20 years in jail for firing "warning shots" into the AIR. cbsnews

A Florida woman who fired warning shots against her allegedly abusive husband has been sentenced to 20 years in prison. [...]

She was recently denied a new trial after appealing to the judge to reconsider her case based on Florida's controversial "Stand Your Ground" law. The law states that the victim of a crime does not have to attempt to run for safety and can immediately retaliate in self-defense.

Did the Florida court system jail Marissa Alexander for 20 years merely for firing warning shots in the air, in self-defense?

The news article in question says:

(CBS News) JACKSONVILLE, Fla. - A Florida woman who fired warning shots against her allegedly abusive husband has been sentenced to 20 years in prison.

From the picture above. Judge name: Daniel James. It's the same as is credited to in the news article. Her name is the same too. The incident happened August 2010. 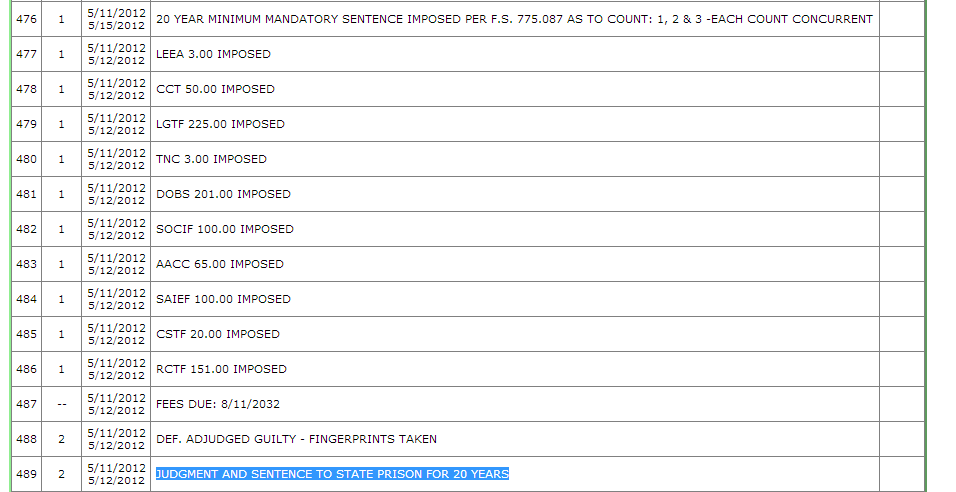 Article also state she had earlier run-ins with the law. Which also is true, according to picture below.

All side data is correct. Do notice she asked for a divorce in 2011, and the name of her husband. Now onto the claim of her being sentenced 20 years to prison for firing warning shots.

At Common Law, an intentional act by one person that creates an apprehension in another of an imminent harmful or offensive contact.

An assault is carried out by a threat of bodily harm coupled with an apparent, present ability to cause the harm. It is both a crime and a tort and, therefore, may result in either criminal or civil liability.

A threat of bodily harm is enough.

It's enough to be considered to ATTEMPT to cause serious bodily injury, or even just use threats about it. Shooting a warning shot can easily be considered as aggravated assault.

Her husband had been to court for domestic violence earlier.

Florida also have the 10-20-Life law when it comes to guns.

The second part of the question is whether she fired "in the air" in "self-defense".

This document reasonable purports to the witness deposition statement from her second husband. (Warning: Contains disturbing descriptions of domestic violence.)

In the deposition, the husband several times uses the term "in the air" to describe Alexander firing away from him, while inside their home.

In this context, "in the air" just seems to mean firing up - not pointed at him or the children - rather than meaning firing into the sky.

He also describes (prior to the shooting) physically and verbally threatening her, physically blocking her exit, and her getting past him, and running to the garage (where she got the gun from a car).

In relation to a question hinting at the self-defense angle, he stated:

I honestly think she just didn't want me to put my hands on her anymore so she did what she feel she have to do to make sure she wouldn't get hurt, you know. You know, she did what she had to do.

It might reasonably be argued that, in this statement, he is attempting to make Alexander sound innocent and diminish any criminal act she may have committed. He contradicts his previous police report (saying he was originally lying) and may not have been considered a reliable witness. Nonetheless, it seems reasonable for a newspaper reporter to use this witness testimony to describe the crime.

In conclusion, any tweet is too short to contain a full context, but it is a reasonable summary of the husband testimonial as to what happened, and is accurate about the outcome - with an understanding that "in the air" is used to mean "into the ceiling".

No, she has admitted under oath that she is guilty of assaulting two children and her husband with a firearm.

She "left the house to get a gun from the garage, returned and fired a shot in the direction of Gray and his two young sons." Source

She was originally sentenced to 20 years, but the conviction was overturned on appeal. She then pled guilty to 3 counts of aggravated assault with firearm and was sentenced to 3 years.

Please see the handwritten letter from one of the children she fired in the direction of:

I constantly see very disturbing things online, on television, and even posters around Jacksonville stating "Mom sentenced to 20 years for firing a warning shot....but 'nobody' was hurt". Well I might not of been hurt physically but I was hurt emotionally and mentally, so that tells me I'm a "nobody" in the mind of the public, and that puts me in more pain and and suffering then a bullet wound.

Not the answer you're looking for? Browse other questions tagged united-states law guns discrimination .

11
Did two people get arrested for "manspreading"?
15
Am I owed a refund of "between $45 and $70" for buying milk in California in the last 14 years?
6
Did Obama use the Espionage act to put reporters in jail?
100
In the American west—the world of cowboys and cowhands—was ammunition traded for alcoholic “shots” of a drink?
7
Did a non-US Hungarian citizen get extradited to the United States for not reporting an American customer of his bank?
13
Did an unmarried couple in Iran get shot for holding hands in 2007?
19
Did Dubai sentence someone to four years in jail for possession of three poppy seeds from a bread roll?
16
Is the penalty for a woman having an abortion more severe than the penalty for rape?
60
Did Abner Schoenwetter spend 6.5 years in jail because he used plastic bags instead of cardboard boxes when importing lobsters from Honduras?