Is the Maldekian crop circle a hoax?

This is known as the Maldekian crop circle 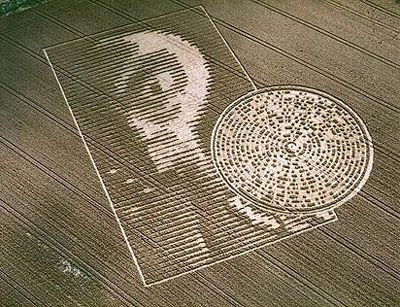 which (according to this link) contains a message:

According to the RedGrittyBrick's comment, It seems to be a genuine 2002 cornfield art-work by anonymous fun-loving Hampshire artists. Can any human technology available to common people create this (probably) overnight during reduced visibility? How?

Wikipedia says that these images usually appear overnight (it seems this is the case since there is no evidence about its creation; during the day somebody would probably notice). Some similar crop circles are beautiful and seemingly difficult to create like this, but they mostly consist of simple circles ind lines, maybe even some GPS tracking points. Here the width of the lines requires great deal of precision, so the difference from other crop circles is the complexity: note well shaped spiral on the disc, the end of its track and the exact width of the lines on the face.

Can any human technology available to common people create this (probably) over night during reduced visibility? How?

A better name for this artwork is the "Crabwood Formation" as it is a corn-drawing revealed on August 15, 2002 at Crabwood near Winchester in Hampshire, England.

To flatten crops in circles, you just need stone-age technology such as ropes and planks. Ref

To make complex designs you can make use of a few additional items such as laser pointers, night vision goggles etc. Ref

Common people can do this but you should note that commercial enterprises do this too, they can afford better tools. Ref They have made examples of complex spiral forms.

To some extent, adding more people makes the job faster. Careful planning and practice must also be helpful.

Not the answer you're looking for? Browse other questions tagged aliens crop-circles .

24
Are crop circles man-made?
12
The starchild skull
19
Were "Ancient Astronauts" or extra-terrestrials responsible for the construction of Stonehenge?
15
Are there reptilian creatures hosting the news?
10
Was an Alien body found in the Republic of Buryatia?
14
Were the pyramids at Puma Punku built by humans?
6
What is the Atacama Humanoid?
3
Has a holographic library been found in tunnels under the Bucegi mountains?