I consume a lot of cholesterol. For three months straight, I consumed around 6-8 eggs a day with Feta cheese, and about a third of a gallon of milk each day. I got my cholesterol tested before and after this regime, and my overall cholesterol decreased, and my ratio of HDL/LDL became more favorable.

I know there is serious debate about the Lipid Hypothesis, with research on both sides claiming statistical significance one way or another.

From the Harvard Public Health repository:

And the biggest influence on blood cholesterol level is the mix of fats and carbohydrates in your diet—not the amount of cholesterol you eat from food.

An aggressive, competing claim on HowStuffWorks:

It's because the level of cholesterol already present in your blood can be increased by high consumption of cholesterol and saturated fat in your diet. This increase in dietary cholesterol has been associated with atherosclerosis, the build-up of plaques that can narrow or block blood vessels. (Think about what happens to your kitchen drain pipes when you pour chicken fat down the sink.) If the coronary arteries of the heart become blocked, a heart attack can occur. The blocked artery can also develop rough edges. This can cause plaques to break off and travel, obstructing blood vessels elsewhere in the body. A blocked blood vessel in the brain can trigger a stroke.

In response to people arguing that the HowStuffWorks link is outdated, here is an academic source, from J.D. Spence, D.J. Jenkins, J. Davignon, "Dietary cholesterol and egg yolks: not for patients at risk of vascular disease", Can J Cardiol, 26 (2010), pp. e336–e339

Dietary cholesterol increased coronary risk in both the Ireland Boston Diet-Heart Study (53) and the Western Electric study (54). These results showed good agreement between the Keys dietary score, which emphasized saturated fat, and the Hegsted score, which emphasized dietary cholesterol. Possible confounding of cholesterol intake from eggs with other risk factors, such as smoking, have been raised as a concern. However, the careful work of Markus et al (55) showed that cholesterol intake, independent of smoking and other risk factors, increased carotid intima-media thickness.

Dietary cholesterol comes exclusively from animal sources, thus it is naturally present in our diet and tissues. It is an important component of cell membranes and a precursor of bile acids, steroid hormones and vitamin D. Contrary to phytosterols (originated from plants), cholesterol is synthesised in the human body in order to maintain a stable pool when dietary intake is low. Given the necessity for cholesterol, very effective intestinal uptake mechanisms and enterohepatic bile acid and cholesterol reabsorption cycles exist; conversely, phytosterols are poorly absorbed and, indeed, rapidly excreted. Dietary cholesterol content does not significantly influence plasma cholesterol values, which are regulated by different genetic and nutritional factors that influence cholesterol absorption or synthesis. Some subjects are hyper-absorbers and others are hyper-responders, which implies new therapeutic issues. Epidemiological data do not support a link between dietary cholesterol and CVD. Recent biological data concerning the effect of dietary cholesterol on LDL receptor-related protein may explain the complexity of the effect of cholesterol on CVD risk.

What is the best scientific understanding of the relationship between dietary cholesterol and blood-level cholesterol?

This can be answered from another answer I have given to a similar question Does eating high cholesterol foods impact cholesterol blood levels of 30% of population based on Web MD article?

This meta-analysis from 1992 by Hopkins of 76 trials where food was supplied by a metabolic kitchen nicely answers this question. [1] 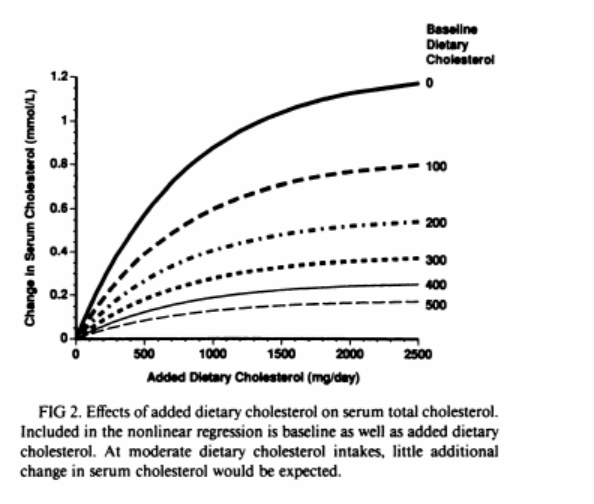 and so for most people who are on high cholesterol diets ( eg. the Standard American Diet aka SAD ) of about 400 mg of cholesterol per day, then additional cholesterol has little impact on their blood levels.

One of the treatments for hyperlipidemia is to use plant phytosterols.

So, it clear from the above the dietary cholesterol is important, and interrupting that absorption has beneficial effects on both total cholesterol and LDL-c.

How, exactly, does the mix of fats and carbohydrates affect cholesterol?

You could read several books on the subject for further explanation.

Not the answer you're looking for? Browse other questions tagged nutrition cholesterol .

35
Are we eating too many carbs? And do we need to switch to the primal/paleo diet?
31
Are saturated fats unhealthy?
10
Is soluble fiber a miracle dietary component?
8
Is eating Dry Milk (powdered milk) harmful?
10
Anti-inflammatory property of food
17
What health impacts, if any, does consuming a large number of eggs each day have?
29
Is margarine healthier for you than butter?