Does immigration have a positive economical impact on Sweden?

DN.se made an article(2013-06-13) about immigrants contributing economically more than the cost. Immigration is a very hot topic in Sweden, and Sweden have a very high number of refugees.

The question is, does this study take into calculation all costs related to immigration, or is it just parts of it? Is there any difference between work-immigrants and refugees in the contributions?

It seems like the stats is too good to be true, and it's commonly said that immigration is breaking down the welfare of Sweden, and that Sweden is going downhill. It's popular stance enough for a racist discontent-party to get voted into the government. I would be interested in an objective and statistics based critical examination of that.

The data the article in DN is based off is from OECD, and the short version is in a picture below, while the full report is linked to bottom of the question. 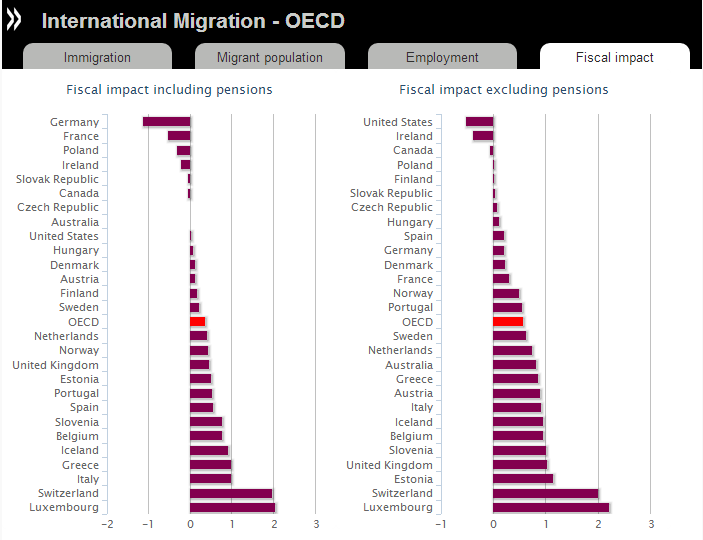 Full report (Page 147 is where the picture above is based on, 173 and 174 compares immigrants to non-immigrants)

20
Have prior U.S. Presidents used executive actions to change immigration policy
19
Will criticizing immigration be illegal in Sweden?
7
Do high immigration levels lower quality of life standards?
29
Is Sweden experiencing a "rape epidemic?"
8
Have 8 out of 10 police officers in Sweden seriously considered quitting due to the danger?
13
Are jihadists returning to Örebro, Sweden given psychological help?
16
Does immigration to the USA increase the unemployment rate?
5
Is this weather forecast from Sweden?
9
Are 80% of migrant unaccompanied children in Sweden adults?
2
Does illegal immigration in the usa strain social services?