Can voice signals be radio-transmitted to a human head acting as a radio receiver?

US Patent 6470214 was recently mentioned on a Jesse Ventura's television program, "Conspiracy Theory", in relation to government mind control experiments and weapons.

Now normally, the whole point of a TV show like "Conspiracy Theory" is to have a laugh at the crazy things some people believe, in this case that the US Government was sending signals and interference to the victims' head, and have a gawk at the countermeasures (magnetic boots, tin foil hats, etc).

However, since a patent was mentioned, I looked it up. And apparently, the US Air Force claims to have invented the means to send voice signals to someone's head.

Is this in fact the case? Does this invention really work?

I am fairly skeptical of this. It seems like it couldn't possibly be a thermal effect as described in the patent without damaging tissue in the recipients brain. One can speculate an electrical effect in neurons, because all one needs to build a crystal radio is a tuned filter and a non linear junction that acts like a diode or crystal for the demodulator. If the signal is strong enough, you don't need the tuned filter — that's the phenomena at work with RFI — Radio Frequency Interference — to consumer devices from amateur radio equipment.

You might convince me that a specified microwave frequency could be heard in the brain as a click or tone, and that might have military or espionage command and control or emergency applications, because it could be a signal to attack or be used to send a message in morse code or even perhaps used for harassment. But I don't see how one could target individuals for messages that couldn't also be heard by others nearby... which is what is claimed by the victims on the TV program.

Google patents for US6470214 indicates that this patent was issued to the US Air Force in 1996 and has this summary:

The text of the patent refers to a RF Hearing Effect discovered during World War 2 and confirms that the radio demodulator is the brain:

(2nd-3rd paragraph of Background of Invention)

The Radio Frequency (“RF”) Hearing Effect was first noticed during World War II as a subjective “click” produced by a pulsed radar signal when the transmitted power is above a “threshold” level. Below the threshold level, the click cannot be heard.

The discovery of the Radio Frequency Hearing Effect suggested that a pulsed RF carrier could be encoded with an amplitude modulated (“AM”) envelope. In one approach to pulsed carrier modulation, it was assumed that the “click” of the pulsed carrier was similar to a data sample and could be used to synthesize both simple and complex tones such as speech. Although pulsed carrier modulation can induce a subjective sensation for simple tones, it severely distorts the complex waveforms of speech, as has been confirmed experimentally. 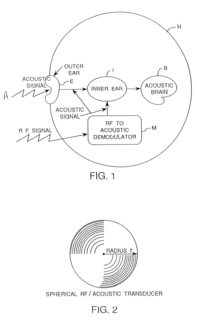 These figures and text below are provided to show that in the invention being patented, the receiver is the human brain and not some electronic device or implant, and this supposedly works by converting thermal heating by the radio signal to an acoustic vibration picked up in the inner ear.

Finally the Spherical Demodulator 45 is the brain as discussed above, or an equivalent mass that provides uniform expansion and contraction due to thermal effects of R.F energy.

The invention provides a new and useful encoding for speech on an RF carrier such that the speech will be intelligible to a human subject by means of the RF hearing demodulation phenomena. Features of the invention include the use of AM fully suppressed carrier modulation, the preprocessing of an input speech signal be a compensation filter to de-emphasize the high frequency content by 40 dB per decade and the further processing of the audio signal by adding a bias terms to permit the taking of the square root of the signal before the AM suppressed carrier modulation process.

The invention may also be implemented using the same audio signal processing and Single Sideband (SSB) modulation in place of AM suppressed carrier modulation. The same signal processing may also be used on Conventional AM modulation containing both sideband and the carrier; however, there is a serious disadvantage. The carrier is always present with AM modulation, even when there is no signal. The carrier power does not contain any information but contributes substantially to the heating of the thermalacoustic demodulator, i.e. the brain, which is undesirable. The degree of this extraneous heating is more than twice the heating caused by the signal or information power in the RF signal. Therefore conventional AM modulation is an inefficient and poor choice compared to the double side-band suppressed carrier and the SSB types of transmissions.

This could also have commercial applications, e.g., imagine bluetooth directly to the brain. The absence of any such applications leads me to suspect this is either a dangerous effect or non-existent.

Is there any other evidence that this invention actually works?

Related, but acoustic effects from fillings — not in the brain: Is it possible to pick up radio signals from dental fillings?

There are some studies that suggest this is a real phenomenon (or at least taken seriously by some researchers):

However, one of the researchers is reported as expressing some skepticism that this could be used to communicate audible speech in non-ideal conditions.

Guy says that experiments have demonstrated that radiation at 40 microjoules per pulse per square centimeter produces sound at zero decibels, which is just barely in hearing range. To produce sound at 60 decibels, or the sound of normal conversation, requires 40 watts per square centimeter of radiation. ”That would kill you pretty fast,” Guy says.

26
Is it possible to pick up radio signals from dental fillings?

26
Is it possible to pick up radio signals from dental fillings?
10
Did Nikola Tesla work on "healing machines"?