Does the Gravitational constant fluctuate?

Rupert Sheldrake recently had a TEDx presentation removed from the TEDx web-site, for making various controversial claims, basically calling all of science into doubt. I am highly skeptical about nearly all of them, most seem particularly cranky and mystical.

The most interesting to me is the claim that the gravitational constant (G) changes over time, or space. In particular, he claims that the estimate is obtained by different labs making measurements on different days, and taking the average, and then the International Committee on Metrology takes an average of averages to decide the "value of big G" (I imagine that they actually just make an estimate of the value). Sheldrake argues that if we looked at the raw data, we might begin seeing patterns (e.g. correlations between changes at different labs indicating that the errors in G are not actually measurement errors, but real, meaningful fluctuations (on a daily or annual scale), but that "no one has done this ... because G is a constant".

So the question is: is there any strong evidence for or against G being a difficult-to-measure constant, rather than being a fluctuating value?

At this time the Gravitational Constant is regarded as a constant with problematic/low accuracy by physicists. From University of Washington Big G Measurement:

Since Cavendish first measured Newton's Gravitational constant 200 years ago, "Big G" remains one of the most elusive constants in physics. The value of big G tells us how much gravitational force acts between two masses separated by a known distance. In Einstein's language of general relativity, it tells us the amount of space-time curvature due to a given mass. Together with Planck's constant and the speed of light it is considered to be one of the most fundamental constants in nature. Big G is a necessary ingredient in determining the mass of the earth, the moon, the sun and the other planets.

Several measurements in the past decade did not succeed in improving our knowledge of big G's value. To the contrary, the variation between different measurements forced the CODATA committee, which determines the internationally accepted standard values, to increase the uncertainty from 0.013% for the value quoted in 1987 to the twelve times larger uncertainty of 0.15% for the 1998 "official" value. This situation is an embarrassment to modern physics, considering that the intrinsic strength of electromagnetism, for instance, is known 2.5 million times more precisely and is steadily being improved. (The situation of G becomes more understandable if one considers the weakness of gravity: the total gravitational force twisting on the pendulum of a typical Cavendish torsion balance is only equivalent to the weight of a bacteria and that small force must be measured very precisely.)

Since we are talking about physics, this is true to the best of our current understanding.

The question of how/why do we know that G (and other constants) are indeed constant was addressed in Physics.SE: What is the proof that the universal constants (G, ℏ, …) are really constant in time and space?

Regarding the claim that the data isn't made public. I couldn't find any evidence that labs are constantly remeasuring and updating G and I couldn't find that this data is hidden. The data is made public through journal articles. Also, the value is not updated constantly as the National Institute of Standards and Technology published a figure that was last updated at 2010.

Here are 4 different values for G from different sources:

When plotted in a graph with error bars, we have the following: 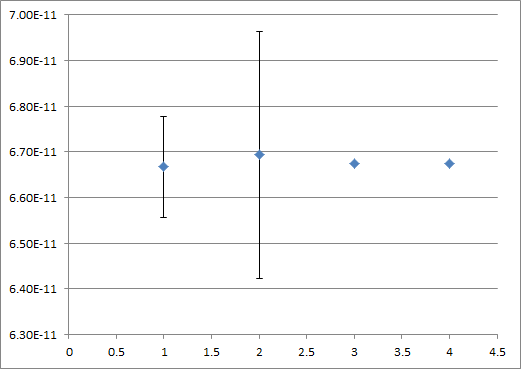 According to Measurements of Newton's gravitational constant and the length of day Europhysics Letters (2015) vol. 110:

About a dozen measurements of Newton's gravitational constant, G, since 1962 have yielded values that differ by far more than their reported random plus systematic errors. We find that these values for G are oscillatory in nature, with a period of [P = 5.899 +/- 0.062 yr]

An article in response, Recent measurements of the gravitational constant as a function of time Physical Review D (2015) vol. 91 adds and corrects some data, but still finds a better fit to the time-varying model with 5.9 year period. It concludes:

The situation is disturbing—clearly either some strange influence is affecting most G measurements or, probably more likely, the measurements have unrecognized large systematic errors. The need for new measurements is clear.

15
Has the speed of light significantly slowed down over the past 6,000 years?
8
Are our minds quantum entangled with people we are (emotionally) close to?

53
Does water swirl the opposite way on the other hemisphere?
14
Does the wind direction affect the audibility of distant sounds?
25
Does paper blunt scissors?
10
Does Quantum Teleportation Transmit Information?
34
Did Manahel Thabet develop a groundbreaking formula to measure distance in space without the use of light?
84
Does this video show a water droplet in gravitational orbit?
3
Does the Wowfixit screen protector harden phone screens?