Is global temperature significantly affected by time of galactic year?

There is a claim that different patches of the galaxy have different climate effects due to variations in cosmic ray strength. I've occasionally heard this used to explain global warming but more often ice ages.

This article is an example of both claims via the cosmic ray mechanism.

If [solar cycles affect temperature], then one should expect climatic variations while we roam the galaxy. This is because the density of cosmic ray sources in the galaxy is not uniform. In fact, it is concentrated in the galactic spiral arms (it arises from supernovae, which in our galaxy are predominantly the end product of massive stars, which in turn form and die primarily in spiral arms). Thus, each time we cross a galactic arm, we should expect a colder climate. Current data for the spiral arm passages gives a crossing once every 135 ± 25 Million years. [...]

So, what's the current state of our scientific knowledge on the subject? Is there an effect? Is it of comparable magnitude to atmospheric gas composition?

"So, what's the current state of our scientific knowledge on the subject?"

The evidence doesn't look good. The EU funded a very substantial project at CERN, called the CLOUD project, to look into the basic physics of cloud formation resulting from nucleation by cosmic rays. This project produced some very good science and some interesting results, but were not able to demonstrate nucleation in conditions representative of the actual atmosphere.

There is a recent survey of GCR - climate links by Laken et al, suggests there isn't much evidence for a relationship between cloud cover and galactic cosmic rays.

Abstract
Despite over 35 years of constant satellite-based measurements of cloud, reliable evidence of a long-hypothesized link between changes in solar activity and Earth’s cloud cover remains elusive. This work examines evidence of a cosmic ray cloud link from a range of sources, including satellite-based cloud measurements and long-term ground-based climatological measurements. The satellite-based studies can be divided into two categories: (1) monthly to decadal timescale analysis and (2) daily timescale epoch-superpositional (composite) analysis. The latter analyses frequently focus on sudden high-magnitude reductions in the cosmic ray flux known as Forbush decrease events. At present, two long-term independent global satellite cloud datasets are available (ISCCP and MODIS). Although the differences between them are considerable, neither shows evidence of a solar-cloud link at either long or short timescales. Furthermore, reports of observed correlations between solar activity and cloud over the 1983–1995 period are attributed to the chance agreement between solar changes and artificially induced cloud trends. It is possible that the satellite cloud datasets and analysis methods may simply be too insensitive to detect a small solar signal. Evidence from ground-based studies suggests that some weak but statistically significant cosmic ray-cloud relationships may exist at regional scales, involving mechanisms related to the global electric circuit. However, a poor understanding of these mechanisms and their effects on cloud makes the net impacts of such links uncertain. Regardless of this, it is clear that there is no robust evidence of a widespread link between the cosmic ray flux and clouds.

There is also the problem that there is no long term trend in Galactic Cosmic Rays to cause the trend in clod cover for which there is no robust evidence: 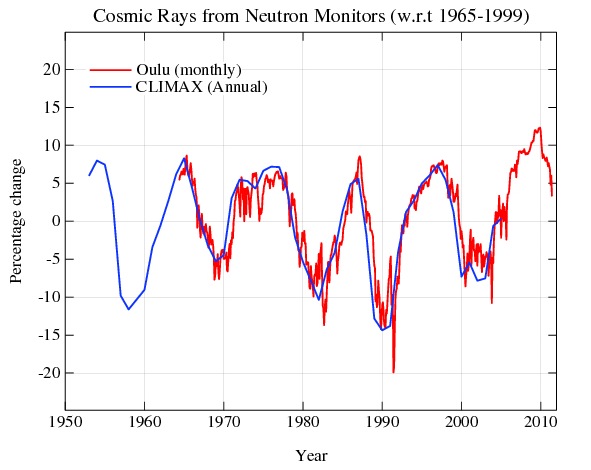 Note that the first line of the quote in the original question ("If [solar cycles affect temperature], then one should expect climatic variations while we roam the galaxy.") is a bit odd, as the strongest cycle in solar activity is the 11-year cycle, and that leaves barely a trace on global mean surface temperatures! 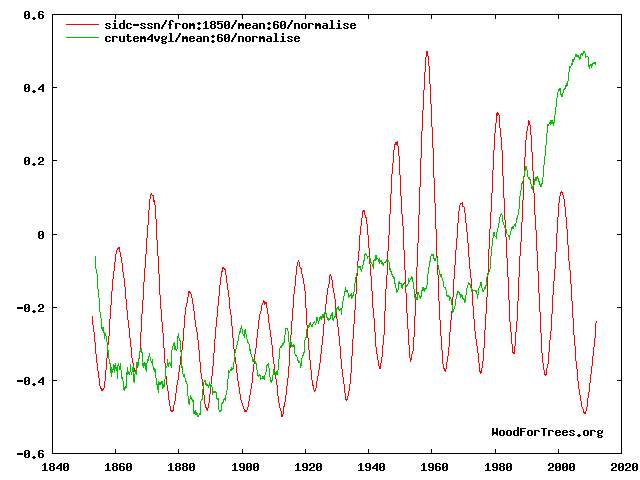 Note I have used a five year running mean, which leaves the 11-year cycle in the SIDC sunspot numbers, but as you can see there is little sign of an 11 year cycle in the HadCRUT4 global mean surface temperature data.

"Is there an effect?"

Not that can be reliably detected (see above).

"Is it of comparable magnitude to atmospheric gas composition?"

No, see Rahmstof et al (citation below), which discusses the problems with a paper by Shaviv (the source of the article in question) and Veizer, and also describe the estimation of the sensitivity of the climate to changes in CO2 from analysis of ice core data, which shows the effects of GCR are not plausibly of comparable magnitude.

See also this article from Scientific American, which discusses a paper by Sloan and Wolfendale, Sloan being quoted as saying:

"We conclude that the level of contribution of changing solar activity is less than 10 percent of the measured global warming observed in the 20th century. As a result of this and other work, the Intergovernmental Panel on Climate Change state that no robust association between changes in cosmic rays and cloudiness has been identified."

Note here solar activity includes both direct effects (e.g. changes in total solar irradiance) and indirect effects, such as the possible influence of Galactic Cosmic Rays on cloud formation (for which there is no robust evidence - see above).

It does however show that mainstream science is not hostile to alternative explanations of climate change, the EU spent over 10 million Euro on the CLOUD project!

31
Is it accurate to say that 97% of experts agree that global warming is anthropogenic?
9
Do the recent CLOUD results have significant implications for global warming?

19
Has global mean temperature at sea level increased since 1900?
14
Was the cretaceous the last time atmospheric carbon dioxide was significantly higher than it is today?