Did the FBI agents responsible for killing Tamerlan Tsarnaev die together during a FBI training exercise?

A viral image is being passed around Facebook claiming that two FBI agents who fell from a helicopter to their deaths during a training accident were the same two who killed Tamerlan Tsarnaev (of the Boston Marathon bombing incident): 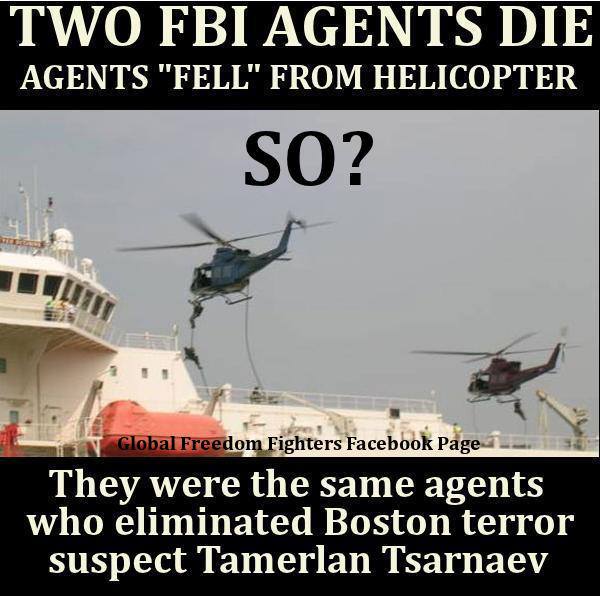 Of course, this is being claimed as "too coincidental to be an accident" by conspiracists.

A google returns a ton of matches on this story, but every one I've seen is either from a blog, or a website that is popular for unreferenced, speculative conspiracy "news" (beforeitsnews.com, info-wars.org, etc.).

Were there two FBI agents killed in a training accident due to a fall from a helicopter, and were those two agents the same ones who killed Tamerlan Tsarnaev?

Two members of the FBI's Hostage Rescue Team, part of the Critical Response Group, died in a training accident in May 2013:

Two FBI special agents were tragically killed Friday during a training exercise off the coast of Virginia Beach, Virginia. Special Agent Christopher Lorek and Special Agent Stephen Shaw were members of the FBI’s elite Hostage Rescue Team, part of the Critical Incident Response Group based at Quantico, Virginia. The cause of the incident is under review.

The Critical Response Group is not a small unit.

This is consistent with the rumor that Tamerlan was run over by his brother.

I'm fairly confident that law enforcement wouldn't specify the names of those who "eliminated" the suspect. I cannot find a reference, but I believe the Watertown gunfight occurred between the Tsarnaev's and local law enforcement, not Federal officers.

Christopher Lorek and Stephen Shaw, members of the FBI's Critical Incident Response Group, were indeed killed in a training accident on 17 May. But Pravda's claim that they "eliminated Boston terrorist Tamerlan Tsarnaev" is poorly sourced; the Pravda article appears to be single-sourced to an FBI press release that does not mention Tsarnaev. (Note that "Source: Pravda.ru" just means that it's written by Pravda, not picked up from an agency.)

It is not clear how Pravda.ru decided that these men were responsible for killing Tsarnaev. Neither of their names are mentioned in connection with Tsarnaev in any news source in Google's archive. This long local newspaper story about the incident does mention that the group was involved in the capture of the other Tsarnaev brother, but that's all I've got. I can't prove it but I'd be willing to bet that they simply made the connection up, probably based on the Virginian-Pilot story.

In general, Pravda.ru lacks the credibility and respectability of the old Soviet Pravda. (!) Past Pravda.ru headlines include "Nostradamus Predicted World War III for 2010" and "Aliens forced Americans out from the Moon."

It's not true, or at least the sources are lying.

Here is what the Pravda article linked in the question says:

The FBI agents, who eliminated Boston terrorist Tamerlan Tsarnaev, died as they fell out of a helicopter, the press service of the FBI said.

How ever, when checked against other sources, like The Telegraph, Bloomberg, The Time, Chicago Tribune and others never mention the Boston bombing. Not just this, but, the agents were part of the FBI's Hostage Rescue Team and all the sources reference to the same event back in February, as the last major event in the unit took part in (the bombings were Apr. 15th):

In February, members of the team rescued a 5-year-old boy from a small underground bunker where he was being held hostage by a 65-year-old man. The kidnapper was killed by agents.

This article from ABC7 news lists the some of the unit's actions and doesn't list the Boston Bombings or the man hunt after the Tsarnaev brothers.

In 2011, two team members helped apprehend a Somali man who prosecutors say is the highest-ranking pirate whom federal officials have ever captured. Mohammad Saaili Shibin was the chief negotiator for a group of pirates who took four Americans hostage aboard their yacht and later killed them. Unlike the other pirates in the case, Shibin was arrested in Somalia. In August, a federal judge sentenced Shibin to a dozen life sentences.

Team members also responded to the 1998 U.S. Embassy bombings in East Africa and have been deployed to Iraq and Afghanistan.

Domestically, their resume includes rescuing nine hostages held at a federal prison in Talladega, Ala. in 1991 by Cuban inmates who were rioting to prevent their return to Cuba. In February, members of the team rescued a 5-year-old boy from a small underground bunker where he was being held hostage by a 65-year-old man. The kidnapper was killed by agents

Most importantly, it seems that the FBI wasn't involved in the shooting of Tamerlan, and that he was killed ether by Boston Police or by his brother. All reports talk about police and none of them mentions the FBI.

And here are some pictures from the manhunt clearly showing SWAT and police forces, and not the FBI: 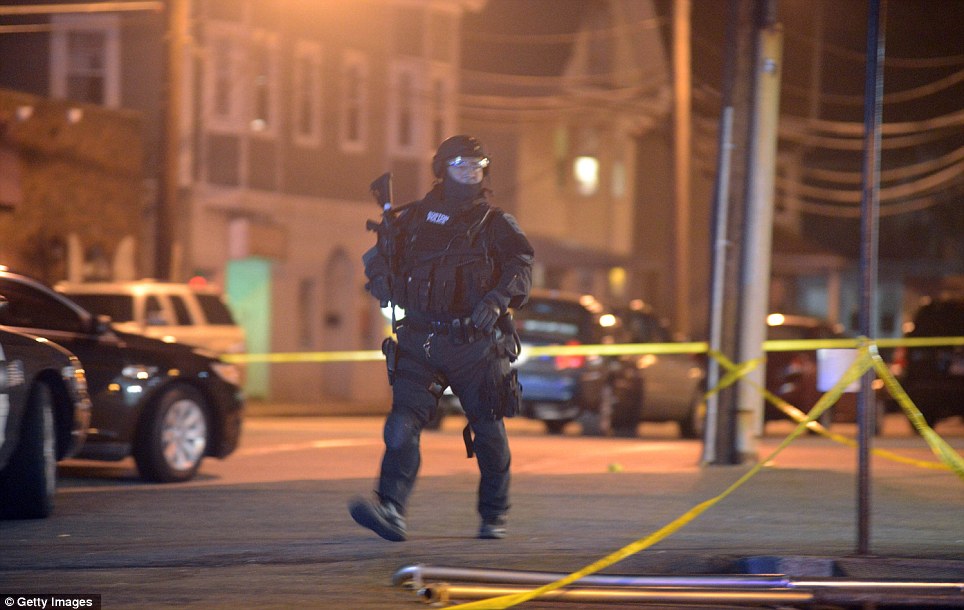 Lastly, here is a picture from the arrest of the second brother (possibly NSFW), the FBI agent in the photo doesn't wear any protective gear, while the ATF/Police officer does, which means that the FBI agent wasn't part of the FBI's Hostage Rescue Team, and probably wasn't doing the shooting.

Not the answer you're looking for? Browse other questions tagged boston-marathon-bombings .