Was the Patterson Bigfoot Film Faked?

On October 20, 1967, Roger Patterson made a video which seared an image of Bigfoot into the popular consciousness.....

Is that video real?

I guess the question is really if the film (not video, it was shot on 16MM) shows an actual unknown primate. Probably not.

From a credibility standpoint the film has always been difficult, if only because the original film has apparently been lost. Therefore, we only know what's in those few seconds of footage. I'd love to know what's on the reel before the famous sequence.

As to the internal evidence you can garner from the film, I'd point to this frame from a later portion of the footage than you usually see. I'm not sure what's up with the sole of the Bigfoot's foot, but it doesn't look organic to me. 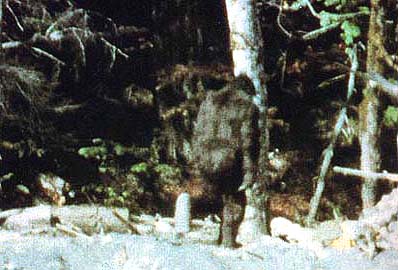 Not the answer you're looking for? Browse other questions tagged history cryptozoology .

14
The extinction of the thylacine: could some still survive?
46
VHS vs Betamax: How influential was the pornography industry in the format war?
50
Is Christianity responsible for the scientific method?
22
Were firearms prohibited in Dodge City, Kansas in the 1870s?
11
Was slipping on a banana peel an actual danger in the early 20th century?
7
Did the Catholic church prosecute Galileo because he was teaching unproven ideas?