Does one acre of hemp yield as much paper as 4 acres of trees?

I saw the following photo on my Facebook news feed: 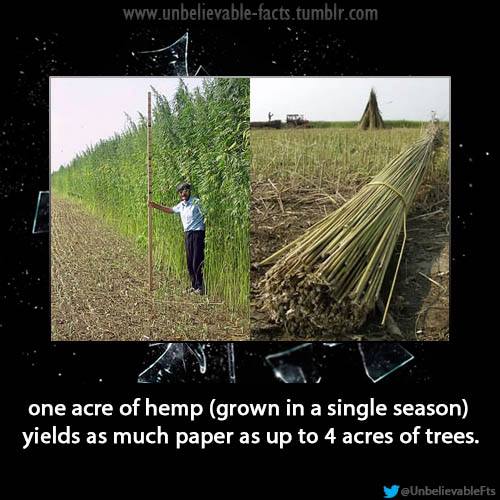 I asked my friend who posted it for a source, and he gave me a link to a hemp manufacturer. I'm pretty sure it's not a reputable source. I'm interested to see if there is any independent study, patent, manufacturing process, etc, that shows this claim to be true.

This quote apparently comes from a 1916 USDA study on Hemp Hurds as a Paper-Making Material,

The most important point derived from this calculation is in regard to areas required for a sustained supply, which are in the ratio of 4 to 1. Every tract of 10,000 acres which is devoted to hemp raising year by year is equivalent to a sustained pulp-producing capacity of 40,500 acres of average pulp-wood lands. In other words, in order to secure additional raw material for the production of 25 tons of fiber per day there exists the possibility of utilizing the agricultural waste already produced on 10,000 acres of hemp lands instead of securing, holding, reforesting, and protecting 40,500 acres of pulp-wood land

Thus, this quote would have pre-dated modern manufacturing techniques for paper production as well as modern tree-farming techniques. This means that this is actually a difficult question to answer in part because tree farms and traditional farming techniques are completely different from each other and modern technology means that the techniques involved have likely changed greatly in the almost 100 years since the study was conducted.

To begin looking at things from a modern standpoint, tree farms typically thin a stand at 15 and 24 years with a final clear-cut harvest every 33 years (see slide 5 of 15). However, hemp can be harvested on an annual basis which puts it in line with traditional farm techniques1. This would imply that on a very simplistic level the hemp could come out ahead just because no thinning or harvest of a tree stand was done in a given year.

So to give a bit more of a fair comparison we are going to need to look at aggregate data and and look at the average yield per year. As with traditional farming different stands can result in different yields and in general harvesting sawlogs is more desirable than pulpwood (which is used to produce paper) since sawlogs are more valuable and therefore more profitable. This in turn means that stands tend to be managed with maximizing the amount of sawlogs produced.

However, if other trees are considered then well managed tree farms appear to greatly outproduce hemp farms in terms of per acre yields. The only way this claim is true is only if year-by-year data is examined due to the way tree farms are thinned and harvested due to the significant number of years of no production.

There are several reasons why hemp is not used to make paper. Biggest one is that it's more expensive.

Hemp has never been used for commercial high-volume paper production due to its relatively high processing cost.

The cost of hemp pulp is approximately six times that of wood pulp, mostly because of the small size and outdated equipment of the few hemp processing plants in the Western world, and because hemp is harvested once a year (during August) and needs to be stored to feed the mill the whole year through.

While the wood products industry uses nearly 100% of the fiber from harvested trees, only about 25% of the dried hemp stem — the bark, called bast — contains the long, strong fibers desirable for paper production.

Hemp is only harvested once per year. And the hemp need to be stored for quite a while. Storing costs together with the fact that only a small part of the hemp can be used for paper, makes hemp not overly suitable for paper, economically.

Cultural requirements and production costs are quite similar to those of corn. Reported hemp yields range from 2.5 to 8.7 tons of dry stems per acre.3

In the paper they use fast growing types of wood, and get a yearly yield of between 6 and 12 tons per year per acre.

Wood uses much higher efficiency converting wood to paper than hemp to paper. 1/4th vs close to 100%. Yields of wood per acre per year, is similar and sometimes more than the ones of hemp.

The picture is wrong, seeded forest is more efficient for paper than seeded hemp. Hemp is less efficient than wood, and doesn't give substantial better yield per acre per year, and is not as economically favorable as wood either.

All in all, wood and foresting is most efficient way to gain paper, per acre.

4
Can Hemp free us from oil dependency?

19
Do Americans use three times as much toilet paper as Europeans?
8
Does one Volcanic eruption release more CFC's into the atmosphere than all man made CFC's combined since their invention?
100
"One year without beef saves 3432 trees"
18
Does the US Federal Government want to cut down and burn trees on a property to protect an extinct frog?
11
Does having one fewer child reduce my carbon footprint as much as 71+ people going vegan?
102
Does the production of a Tesla battery produce as much CO2 as driving 200,000 km?
20
Does rolled sod produce 40x as much oxygen as a pine forest?