Can some species of jellyfish live forever?

I came accross one of those top 10 video today on youtube (while I remember trying to learn more about particle filter...) and it was about the longest living creatures. I already knew lobster and tortoise were amongst the top ten, but to my great surprise the number one was a jellyfish. The video claims that they can live forever. I did find some other websites claiming that scientists agree with that, but I would like to see a proof (if there is any).

Yes they can, as long as they are not eaten, or killed in other ways.

Here is an article at National Geographic:

Like the Brad Pitt movie character, the immortal jellyfish transforms from an adult back into a baby, but with an added bonus: Unlike Benjamin Button, the jellyfish can do it over and over again—though apparently only as an emergency measure.

And here is its Wiki page:

The medusa of Turritopsis nutricula is the only form known to have developed the ability to return to a polyp state, by a specific transformation process that requires the presence of certain cell types (tissue from both the jellyfish bell surface and the circulatory canal system). Careful laboratory experiments have revealed that all stages of the medusae, from newly released to fully mature individuals, can transform back into polyps.

It appears on the source, but there is no option to copy-paste it and I'm too lazy to transcibe it at the moment, so here is a screen capture: 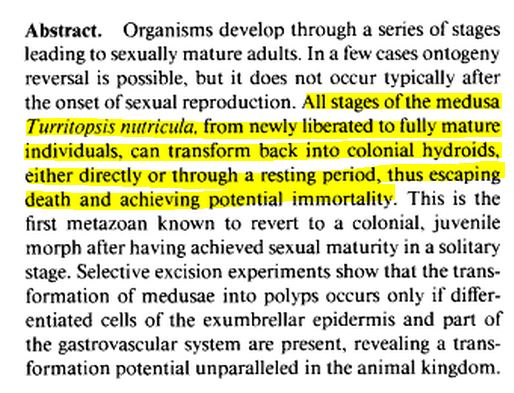 And finally a very nice video by the vlogbrothers, on their YouTube show "Scishow" explaining this (with sources).

One study suggests that for one species this is hypothetically possible.

Organisms develop through a series of stages leading to sexually mature adults. In a few cases ontogeny reversal is possible, but it does not occur typically after the onset of sexual reproduction. All stages of the medusa Turritopsis nutricula, from newly liberated to fully mature individuals, can transform back into colonial hydroids, either directly or through a resting period, thus escaping death and achieving potential immortality.

25
Is yawning contagious across species?
26
Are some species of animals born pregnant?
27
Can "breatharians" live without food or water?
24
Is reviving an extinct species possible?
22
Do married people live longer than single people?
6
Do folks who live with a pet have a longer life?
7
Do small dogs live longer than large dogs?
1
Can microbes live on surfaces with less than 10% humidity?
2
Is climate change causing jellyfish to wash up on the beach?