Is Netherlands the least racist country in the world?

I have heard from my friends who are students of The Netherlands universities or are immigrants and live there with their families that this country is more welcoming to different people than the other countries in the Europe. I have searched and found a site which seems claim the same:

There is a lot of racism around us. There are countries who wouldn't want a Muslim, a Jew or an immigrant as a neighbor (e.g. Northern Ireland, Greece and Italy don't like any of the above), but then again, there are people who don't judge you based on your cast, creed, religion or skin color. Here we have a list of the top 5 least racist countries in the world:

Is there any research to prove this claim or is it just a joke and is not raised from real stories and statistics?

P.S: Racism in the context mean: Any distinction, exclusion, restriction, or preference based on race, colour, descent, or national or ethnic origin that has the purpose or effect of nullifying or impairing the recognition, enjoyment or exercise, on an equal footing, of human rights and fundamental freedoms in the political, economic, social, cultural or any other field of public life

As I will explain, this isn't an ideal answer, but provides empirical evidence that The Netherlands is not necessarily the least racist country, and that the very question isn't precise enough to answer meaningfully.

The definition of "least racist" isn't clearly defined here, and there are a number of measures that could be used.

Unfortunately, I do not have statistics for that question. I do have a close proxy, which is a city-wide rather than a country-wide survey asking for level of agreement with the question 'the presence of foreigners is good for the city.

It isn't available for every country in the world, but instead for 75 cities around Europe, 500 respondents per city. 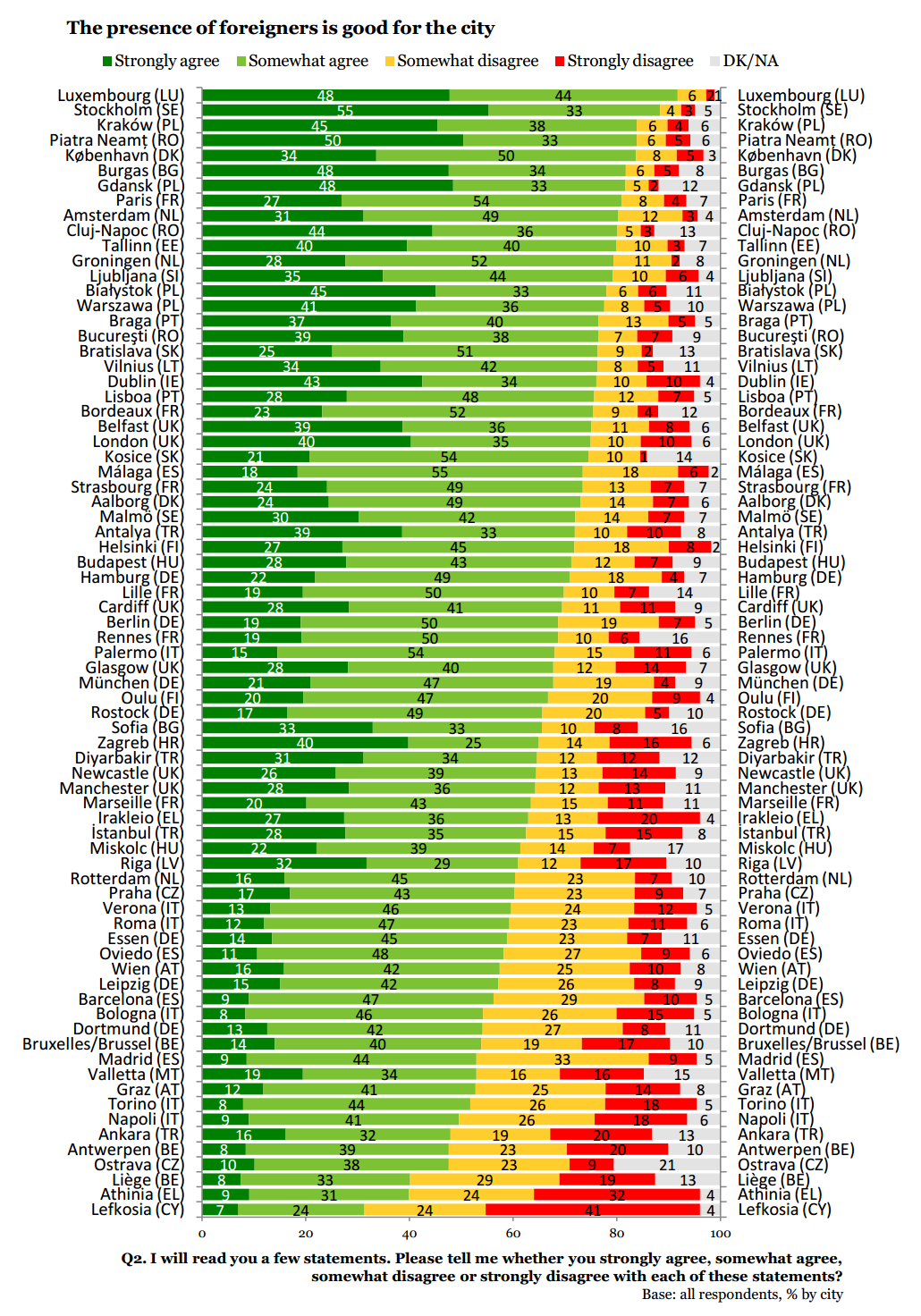 From this chart we can draw some conclusions:

The city of Luxembourg (which is probably a reasonable proxy for the entire country) tops the list.

The first Dutch city comes ninth. Other Dutch cities appear in the 12th and 53rd positions. (The absolute positions of these numbers a largely meaningless - other, unpolled, cities may rank higher.)

So the Netherlands does not have any clear standing higher than many other countries.

We can draw some other conclusions that throw the original question into doubt.

For example, consider the ranking of Swedish versus Dutch cities:

Does it make much sense to declare one country less racist than another when they mingle in rankings like this?

For that matter, if you declared the least racist city to be the one with the smallest proportion of respondents who strongly disagree with the statement, we can see from the red bars in the histogram that this would give quite different results, with Gdansk and Luxembourg vying for the lead.

In conclusion, not only can't you say that the Netherlands is the least racist country, the question is too ill-defined to give that position to any country - we can't even give Luxembourg the European crown.

Not the answer you're looking for? Browse other questions tagged sociology racism netherlands .