In a discourse to his staff in 1943, Hitler made this claim:

I'm skeptical of this claim because 18,000 seems to be a very large number.

Yes, suicide rates was that high!

Goeschel’s study of suicide in Nazi Germany (2009) shows that the number of suicides varied greatly as the War progressed, as far as can be determined. Following the First World War the German suicide rate climbed steadily from just under 16 per 100,000 to 29 by the early 1930s

Wikilink about demographics in Germany (Kudos to Andrew Grimm) say that in the 1930s there were about 65M-69M people living in Germany.

The mass suicides during the loss of the war probably were even higher though.

Just over 7,000 suicides were reported in Berlin during the year 1945, but it is thought that many suicides went unreported due to the chaos of the post-war period.

Probably that year the number was EVEN higher.

I happened to have access to the book Suicide in Nazi Germany, so just to corroborate the earlier answers by reproducing some figures from the book.

Bonus: He doesn't give corresponding figures for the war years for Germany as a whole, but does for Berlin (p. 220). It looks like Berlin's suicide rates were always higher than Germany's, but spiked up in 1945. 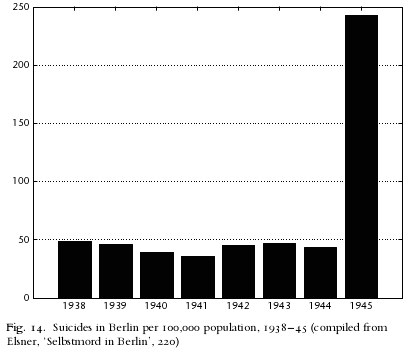 By the way, 18000 is perhaps not such a large number. There were about that many each year around 1980 (when Germany's population was comparable to 1930s Germany). 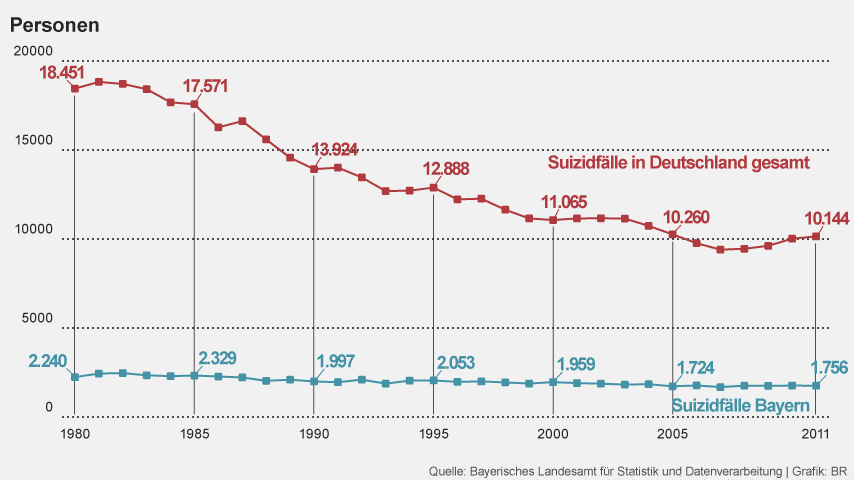 The number may or may not be correct. But it is plausible.

If you view the Wikipedia article List of countries by suicide rate, there are several countries that nowadays have a suicide rate above 20 per 100,000 people per year.

Not the answer you're looking for? Browse other questions tagged adolf-hitler suicide germany .

9
Did Germany deny asylum because victim of blood feud could settle feud by giving two daughters to his enemies for marriage?
41
Is Germany paying for vacations for refugees to the refugees' home countries?
23
Were there more suicides than violent deaths worldwide in 2018?
47
Is COVID-19 more dangerous than typical annual coronavirus variants?
4
Did Hitler say: “My mother was an ordinary woman, but she gave Germany a great son”?