Did Obama tell people to ignore those warning against tyranny?

Did Barack Obama say the following? 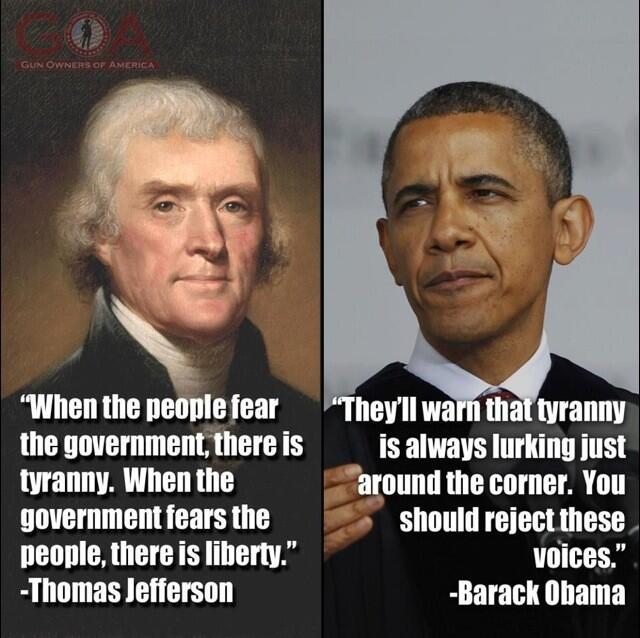 "They'll warn that tyranny is always lurking just around the corner. You should reject those voices."

Yes he did. It may have been taken a bit out of context:

Unfortunately, you’ve grown up hearing voices that incessantly warn of government as nothing more than some separate, sinister entity that’s at the root of all our problems; some of these same voices also doing their best to gum up the works. They’ll warn that tyranny is always lurking just around the corner. You should reject these voices. Because what they suggest is that our brave and creative and unique experiment in self-rule is somehow just a sham with which we can’t be trusted.

Since the original claim is that Obama contradicted Jefferson (and presumably by implication that Obama didn't understand the founding principles of U.S. government), I think the quote attributed to Jefferson is fair game for an answer.

According to the Thomas Jefferson Foundation, nothing resembling it appears in the papers and biographies of Jefferson.

The earliest appearance of the phrase that they found is The Barnhill-Tichenor debate on Socialism (1914), where it appears in one of (John Basil) Barnhill's sections, in a list of bons mots. It isn't clear whether Barnhill originated it, but there is no mention of Jefferson.

The earliest attribution to Jefferson that they found was from 1994.

45
Did Obama say the USA is "no longer a Christian Nation"?
17
Did Two Eagles tell this joke?
24
Did Obama admit training IS?
9
Did Obama call for online "truthiness tests" to "curate" news on the internet?
1
Did Obama secretly visit Antarctica?
12
Did Donald Trump tell people to "check out" Alicia Machado's sex tape?
11
Did Obama order the drop of over 26 thousand bombs in 2016?
38
Are these photos of protests posters against the Obama Administration real?
1
Did Twain state: "Most people are bothered by those Scripture passages which they cannot understand...."
35
Did Michelle Obama have a staff of 23 people, while Melania has a staff of 4?