Is the immigrant/crime correlation simply explained by lower wealth?

I am often confronted with statistics that show immigrants are much more involved in crime than the native citizens. This seems to be common in Western countries. Here are some examples, however, these might not be in English:

I can go on and on with this list, if I tried I'm probably sure that I could find these shocking statistics for each country in Western Europe.

I myself however, believe this is not just because of failed integration/immigration, but mainly because immigrants tend to be less wealthly than the average native citizen.

Question: Are there studies/statistics which show a strong correlation between wealth and crime irrespective of immigration status, in Western European countries? In other words, studies/statistics showing that underpriviliged/less wealthy people are (much) more likely to commit a crime as opposed to immigrants?

It is difficult to find the required numbers to answer your question as asked, but I've made an attempt. The raw data I've used is from the statistical database from "Statistics Norway". The charts and numbers are not deep-linkable but available in the sections "Immigration and immigrants", "Population", "Labour market and earnings" and "Social conditions, welfare and crime".

"Statistics Norway" offer a lot of raw data from their database, but not all numbers are broken down by citizenship. I've tried to find a few datasources, from which at least a partial conclution can be drawn (all numbers from 2010):

Based on these numbers, I've calculated the following ratios by citizenship:

6 of the 44 countries have rather extreme ratios and fall outside this diagram, but plotting the crime ratio on the X axis and the unemployment ratio on the Y axis gives the following plot: 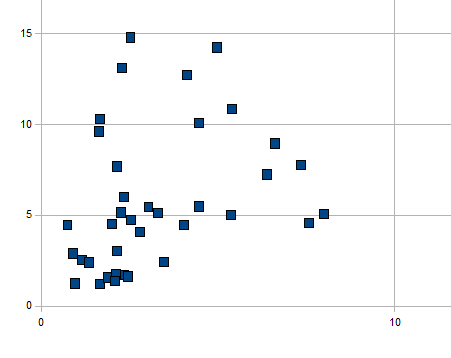 Looking at the crime and unemployment ratios separately, there is a very large variance in the numbers. Here is a list of countries, where at least one of the ratios are >10:

Yes, these ratios are actually correct. The number of Algerians charged with a criminal offence is relative to the population count 54 times higher than the number of charged Norwegians. 29,516 of roughly 4.5 million Norwegian citizens were charged with a criminal offence in 2010, while 128 Algerians faced the same faith of a population of 362. Likewise, 700 of the 1561 Vietnamese citizens living in Norway were reported unemployed, making the unemployment ratio 36 times higher than among the Norwegian citizens.

Worth to notice is perhaps also, that only immigrants from three countries show a crime ratio <1:

All countries show an unemployment ratio >1.

The crime ratios may also contradict the early assumption that the law enforcement may more strictly pursuit crimes committed by specific ethnic groups. The crime rates for immigrants from Sweden and UK are e.g. higher than for the immigrants from Poland, Turkey, Ukraine, Bosnia, Eritrea, Ethiopia and Pakistan - immigrant groups which undoubtedly have a reputation of being "more criminal" than other foreigners.

Immigrants from only six countries score a crime per unemployment ratio >1.5:

I've made all the data used in these calculations available in an unfortunately rather chaotic OO Calc Spreadsheet. Source of the data: Statistisk Sentralbyrå, Statistics Norway.

Feel free to draw your own conclusions.

Not the answer you're looking for? Browse other questions tagged criminology immigration .

115
In the US, are illegal immigrants more likely to commit crimes?
6
Is large Muslim immigration within an European country a cause for higher sexual violence in that particular country?

41
Is the increasing availability of high speed internet pornography reducing sex crime rates?
25
Are white people more likely to commit mass murder in the United States?
29
Is Sweden experiencing a "rape epidemic?"
12
In USA the foreign-born are only a fifth as likely to be incarcerated as the native-born?
30
Drop in IQ due to immigration?
6
Do illegal immigrants commit more murders than mass shooters?