Is the "I before E" English spelling rule wrong more than it is right? 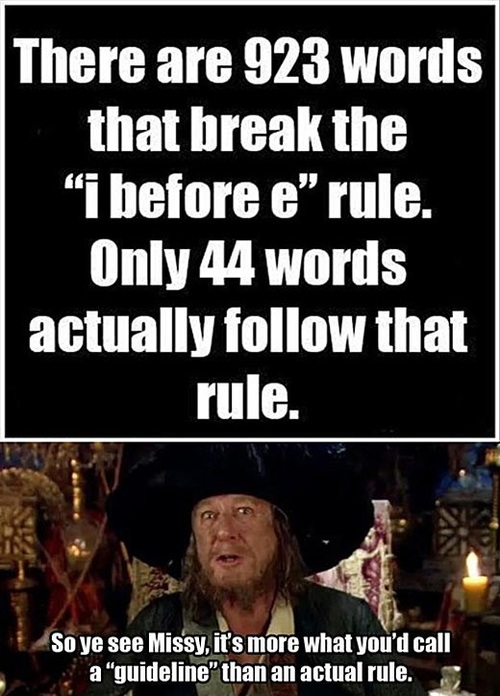 There are 923 words that break the "i before e" rule. Only 44 words actually follow that rule.

This is a picture circulating right now, claiming that a huge majority of the words break the "i before e" rule, and that only a few actually follow it.

Is the rule as often incorrect as the picture claims?

"I before E, except after C" is a mnemonic rule of thumb for English spelling. If one is unsure whether a word is spelled with the sequence ei or ie, the rhyme suggests that the correct order is ie unless the preceding letter is c, in which case it is ei.

Wikipedia link that explains the rule

Reset to default
39
Want to improve this post? Add citations from reputable sources by editing the post. Posts with unsourced content may be edited or deleted.

It won't be possible to skeptically analyze whether or not the rule is useful. I will stick to analysis of the factual claim. I'm assuming that the "i before e" rule is exactly as you've quoted from the Wikipedia article.

The claim in the image is false.

In the Oxford English Dictionary, there are 8161 words that involve the letters i and e adjacent to each other.

So, among all ei or ie words in the Oxford English Dictionary, 5414 words follow the rule of thumb, and 2807 break the rule.

EDIT: The picture is similar when taking word frequency in to account. In a list of "the top 5,000 words in American English":

Those that break the rule

So, among these most frequent words there are 78 supporting the rule, and 29 against.

27
Did Shakespeare introduce over 1700 new words to the English language?
25
Are there more English speaking people in China than in the USA?
48
Are there 20,000 English words in the average adult's vocabulary?
12
Did the head of the Joint National Committee on language claim Jesus spoke English?
15
Do 22% of Muslim women in the UK speak little or no English?
10
Do the English eat "pork" instead of "pig" because they were servants of the French?
18
Was "their" a singular pronoun in English before the 16th century?
7
Is "Mu" a more common last name than "Xi" in China?