Can the rhinoceros beetle carry 100x its own weight?

Intel have posted a twitter pic depicting a rhinoceros beetle carrying 8 ultrabooks (of an unrecognizable brand) with the tagline:

#FACT The Rhinoceros Beetle can lift up to 100x its own weight. That means it could carry 8 Ultrabooks on its back 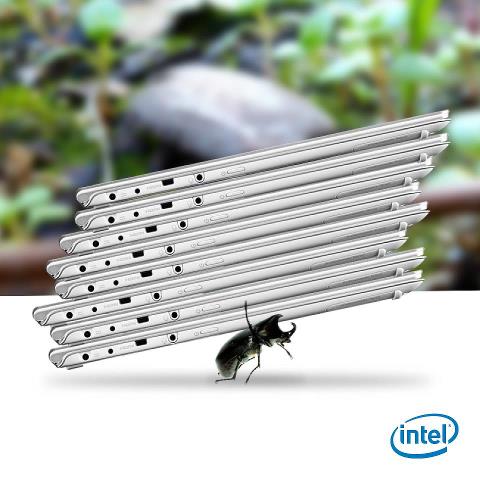 Assuming that the beetle somehow ended up under a pile of ultrabooks, is it possible for the beetle to actually walk away with them, or to just not get crushed by them?

In other words, is it possible for a rhinoceros beetle to carry 8 ultrabooks?

Adults of some species can lift objects 850 times their weight! That would be equivalent to a human lifting 9 fully grown male elephants!

Compared to an elephant, the rhinoceros beetle looks minuscule. But ounce for ounce, this insect is considered the world's strongest creature Rhinoceros beetles, which get their name from the hornlike structure on a male's head, are capable of carrying up to 850 times their own body weight. A human with this relative strength would be able to lift some 65 tons (59 metric tons).

This sounds really crazy, what is it the beetles actually does, and how heavy things is it they have lifted?

Male Hercules beetles can be up to 17cm long, and weigh up to 120g. The species exhibits ‘sexual dimorphism’, which means that females and males are very different in appearance. For a long time, scientists thought that they were actually separate species; only the males have horns (which make up to half of their body length). These horns are used to fight other males, burrow into wood and move obstacles (like sticks, rocks and small logs) out of its way.

Weight of the beetle

The beetle seems to push around rocks, sticks and logs using its large horns. The beetle's weight is in other words 120g, and can lift things 850 times its own weight. 0.12kg * 850 = 102 kg. The beetle have apparently been shown to lift things weighting 102 kilos. This sounds pretty fantastic. How have those tests been done? Did the beetle really just grab a 102 kilo rock, and move it about?

In the video, it shows the tests done by scientists in University of California, Berkeley, CA. And the beetle was shown to carry 100 times its own weight ON ITS BACK. The video says they tested that.

Details about the tests can be found in the paper "INEXPENSIVE LOAD CARRYING BY RHINOCEROS BEETLES" from 1995, from Department of Integrative Biology, University of California, Berkeley, CA.

There they tested how much the beetles energy consumption changed with carrying 30 times its body weight. And in the paper it's depicted the tests shown in the youtube video as well. The beetle could move pretty much unhindered with 30 times its weight. The paper didn't say anything about 100 times it's weight, but it wasn't completely related to the topic. Where the number 850 times its weight comes from that is the question.

Females of the species will dig a tunnel into a pile of dung and males will enter the tunnel looking to mate. If a male encounters another male in the tunnel they will battle each other, each trying to remove the other. The scientists tested the beetle's ability to resist rivals by measuring how much weight was needed to pull a male beetle out of his hole. That's how they know that it would take 1,141 other beetles to pull a determined male dung beetle out of 'love tunnel'.

Probably a similar test was done to the Hercules beetle. That means the 850 times number is not for amount it carries on its back, but how strong it is.

Yes the beetle can carry 100 times its weight, on its back

Not the answer you're looking for? Browse other questions tagged biology entomology biophysics .

35
Can you put on more weight than what you eat?
12
Can you remember specific things you learn in the womb?
29
Can ants lift 50 times their weight?
16
Can a person forget their own name?
8
Can BCAAs be beneficial for recovery and performance for weight lifters?
17
Can a plant survive bottled in its own ecosystem for 50 years?
37
Can an air-bubble in a syringe kill the patient?
17
Is the inside of a field cucumber 20 degrees Fahrenheit cooler than its surroundings?
14
Can a person lose weight by being cold?