Did journalist Amber Lyon claim that the US Government paid CNN to control content?

One of my conspiracy theorist friends on Facebook recently linked an article claiming that Amber Lyon was fired from CNN for blowing the whistle on the Obama administration paying CNN to not air certain story.

Associated with the article was the following "infographic": 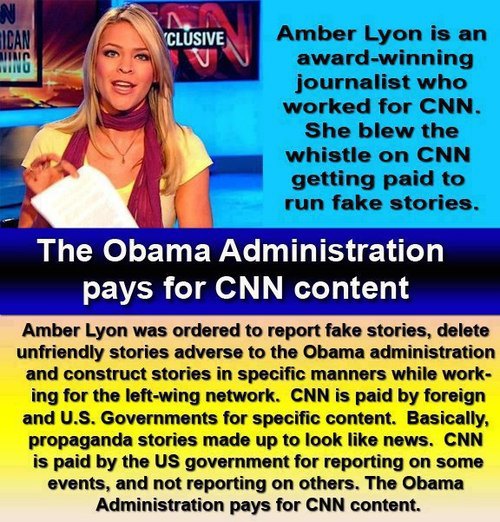 The article linked above makes this specific claim:

She says she was ordered to report fake stories, delete unfriendly stories adverse to the Obama administration (like the Nick Robertson report), and construct stories in specific manners while working for the left-wing network.

CNN is paid by foreign and domestic Government agencies for specific content.

Let me repeat that.

CNN is paid by the US government for reporting on some events, and not reporting on others. The Obama Administration pays for CNN content.

I could not find any mention of these allegations on Amber Lyon's own website.

Furthermore, the article referenced as a primary source for the claim makes no mention of anything besides the suspicion that the government of Bahrain influenced CNNi's decision to not air a specific documentary of Lyon's in its entirety.

A unverified google document is cited as the back-and-forth between Lyon and CNN, but it seems limited to the discussion of Bahrain.

However, Lyon has stated during at least one interview that she believes CNN runs featured news pieces that are financially sponsored by various foreign governments, including Bahrain, Georgia, Lebanon and Kazakhstan. These pieces are purportedly paid propaganda pieces, funded directly by the foreign governments.

Is there any evidence to support this claim? Lyon claimed to have found this out through research; has she ever detailed this research, or provided supporting evidence? Did she also claim the United States government was also paying CNN for specific content?

TLDR: The meme is completely false.

Ironically, the article and the infographic are both spreading the same type of propaganda they accuse CNN of.

Some background: Firstly, CNN and CNN International are separate organizations.

Amber Lyon became concerned about the credibility of CNN International (ie, not CNN -- which is US only), because of their handling of a documentary she made called iRevolution: Online Warriors of the Arab Spring for CNN (not CNN International).

I know, it's a little confusing. Bear with me.

So confused was she by this, that she decided to dig a little deeper, and that's when she discovered what she claims were "financial connections" between CNN International (not CNN) and the Bahrain government that showed the country had paid for pro-Bahrain content to be aired on CNN International. (She also claims she found similar connections with Lebanon, Georgia and Kazakhstan.)

This is the basis for saying that Lyon made accusations about governments paying for content on "CNN" -- it was actually CNN International she was accusing, not the US arm, CNN.

CNN International issued a response to her claims, which stated,

So yes, CNN aired her documentary in the US in June 2011, they just didn't show it on CNN International. Now given that CNN International is the most watched English speaking news outlet in the Middle East, you might think that Lyon's were justified, but CNN maintains that they had already aired similar Bahrain programming that was critical of Bahrain... including some of Lyon's other work!

With regards to Lyon's accusation that CNN International aired "sponsored" content from corrupt regimes, they also stated that,

CNN International has carried advertising and sponsored content since the 1990s. The critical issue is that our editorial operations and our commercial operations are completely separate. No deal ever buys any editorial influence. (emphasis added)

CNN International was investigated in 2015 regarding their "sponsored content" by UK body OFCOM. They concluded that CNN International had produced a small number of sponsored "current affairs" programs (which, incidentally, is against UK law), but did not take issue that such content was not transparently labelled "sponsored". They also did not find evidence of editorial bias. (Source)

This is where a gray area appears... You can read their back-and-forth debate here, and decide for yourself:

The infographic also is focused solely on CNN (US) and the Obama Administration, neither of which have anything to do with the above.

Finally, she was also never "fired" from CNN for blowing any whistles either. She was laid off (along with 60 other people) as they closed a whole division down as part of restructuring. And if you need further proof of this, consider the fact that it was only after she was laid off that she started talking publicly about her concerns... so it certainly wasn't connected with "whistleblowing".

More than this, she also specifically says that she never saw any evidence of US Government officials controlling the news during her time at CNN. (You can hear her talk about both of these things in her own words here)

As an aside, with regards to Amber Lyon's actual concerns with US news outlets (including CNN) and its relationship with the US government, Amber Lyon is very clear about what they are -- and they have nothing to do with the claims of the infographic:

Update: Eight years after she voiced her concerns, we can see that her fears of a US war with Iran amounted to nothing.

I think this is an interesting claim, and it's a shame that this isn't what's being spread around in infographics and overwrought websites.

It's hard to know where the truth lies and the conspiracy theories begin with regards to CNN International's ties to corrupt regimes. She talked with Alex Jones in September 2012, but it's worth watching for what she says (you have to ignore what Alex Jones says) and that you're aware that she's referring to the Bahrain government and CNN International.

Her claims that the US Government's attempts to crack down on terrorism is negatively affecting the free press is troubling, but she's never claimed they paid CNN (or anyone else) for content.

So, regardless of all of this, one thing is for sure; both the infographic and article are absolute nonsense.

8
Does a UN Treaty force gun control in the USA?
6
Did CNN journalist say that Chechens are from Czech republic?
17
Did CNN fake footage during the Gulf War purporting a live gas attack?
6
Did pro-Israel Americans convince the U.S. to initiate the Iraq War?
36
Did 17 U.S. intelligence agencies claim that Russia was behind the DNC hack?
2
Did CNN claim Richard Spencer likened Jews to soulless golems?
22
Do pricey medicines in the USA subsidise R&D for the rest of the world?
12
Did some people claim in the 1970s that metric road signs would facilitate a ‘Russian invasion’?
66
Do the majority of doctors in the USA support hydroxychloroquine use for covid-19?