Can overheating laptops cause fire?

I have come across a Facebook post from an unverified and unreliable source, which claims that a fire was started using heat as a source alone. Here is the exact post which is the subject of the question.

A couple lost their 25 year old son in a fire at home on June 4th. The son who had graduated with MBA from the University of Wisconsin-Madison two weeks earlier had come home for a while. He had lunch with his dad at home and decided to go back to clean up his hostel room. His father told him to wait, to meet his mother, before he went back for a few days. He decided to take a nap while waiting for his mom to come back home from work. Some time later their neighbors called 911 when they saw black smoke coming out of the house.

Unfortunately, the 25 years old died in the three year old house. It took several days of investigation to find out the cause of the fire. It was determined that the fire was caused by the laptop resting on the bed. When the laptop was on the bed cooling fan did not get the air to cool the computer and that is what caused the fire. He did not even wake up to get out of the bed because he died of breathing in carbon monoxide.

The reason I am writing this to all of you is that I have seen many of us and also our brothers& sisters sons&daughters friends&family using the laptop while in bed. Let us all decide and make it a practice not to do that. The risk is real. Let us make it a rule not to use the laptop on bed with blankets and pillows around. Please educate as many people as you can.

I would have dismissed this post as an average everyday hoax, but on searching a little further, i came across another news article "Laptop fire blamed for Vancouver death", which claims a similar but not the exact case of the facebook post. This is the relevant quote from the article

The fire started after the computer was left on a couch, plugged in and turned on. Because of the lack of ventilation under the laptop, less than an hour later the lithium-ion battery overheated and burst into flames, sparking the fire that eventually killed the man.

So my questions are 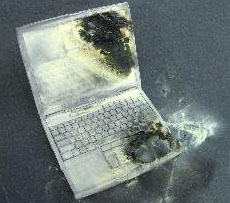 Scientifically, i feel this is not possible to happen, since all laptops have a thermal sensor, which when crosses a certain threshold, just turns the laptop off, and i feel just the heat is not sufficient to start a fire, without any actual source of fire like a spark of some kind,an electrical short or a chemical reaction. Is my understanding correct?

Generally speaking you're right, but it's not completely implausible.

Lithium-ion cells with cobalt cathodes (same as the recalled laptop batteries) should never rise above 130°C (265°F). At 150°C (302°F) the cell becomes thermally unstable, a condition that can lead to a thermal runaway in which flaming gases are vented. (source).

One of mobile CPU with highest critical temperature (in other words temperature at which it'll shut down the computer) was Mobile Core 2 Duo with 105°C, while for some mobile GPUs it used to go as high as 120-125°C (Nvidia 8400M GS). Both of which were popular combo in laptops about 5 years ago. And in some laptops is possible to do some overclocking and actually rise these thresholds a bit.

Even with current generation of mobile CPUs, there are some that still have 105°C critical temperature (for example Ivy Bridge mobile i7).

Yes, it happens. Here are some cases where a laptop was identified as the cause of a fire by officials:

A close friend of mine's father lost his home the other day from careless placement of a laptop on a bed. 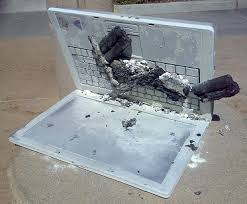 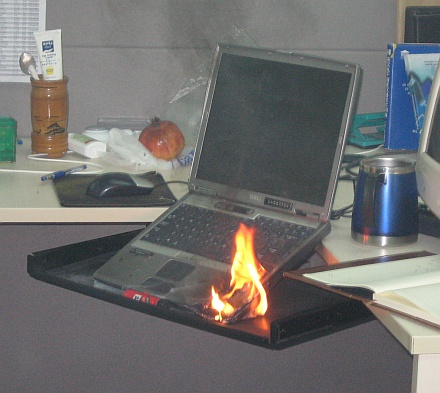 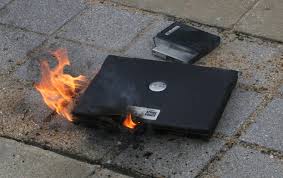 MONTAGUE, P.E.I. -- An overheated laptop computer sitting on a bed is believed to have started a fire in P.E.I. that has left a mother and her two children homeless. RCMP say the fire started just before 6 a.m. at a residence in Montague.

Not the answer you're looking for? Browse other questions tagged computers fire .

15
Fighting fire with electricity. Plausible?
4
Make fire with a potato, salt, and toothpaste?
7
Do fire shelters save lives?
17
Was the "Worst Twerk Fail EVER - Girl Catches Fire!" video staged?
6
Is water that can be set on fire safe to drink?
26
Is using "sleep mode" wasteful and harmful to a computer?
10
Does having your bedroom door closed while sleeping improve fire safety?
22
Does this picture show an Arizona fire department extinguishing a fire in Mexico?