According to several articles, yowies (i.e. wild, unidentified, hominids, reputed to live in Australia) have been allegedly observed by many.

For example, in this Herald Sun article about a man in Canberra: , it is stated "The creature, according to James, was a juvenile covered in hair, with long arms that almost touched the ground".

Similarly, it was claimed that a different cameraman in Canberra spotted and filmed a yowie.

I am skeptical of these two claims, as I would have thought such a yowie, if it existed, would be well known in the community already.

Are these claims true that Yowies exist?

Probably not, but also likely unfalsifiable.

As your second source states:

A researcher, says it is the most conclusive evidence to date that a Bigfoot creature may be roaming the Australian wilderness.

As the Wikipedia article states:

As is the case with the North American Sasquatch, many people discount the existence of the Yowie considering it more likely to be a combination of misidentification, folklore and hoax.

This is in fact the same story as with Bigfoot and Yeti, only even less plausible.

Before we start, it must be noted that like any other mythical creature we can't prove a negative. Meaning we can't prove that there is a 100% certainty that this creature doesn't exist. We can just say that it is extremely improbable for such a creature to exist and that in order to prove that there is such a creature irrefutable proofs are needed. For example, a alive specimen, or at least a tissue that can't be checked to not come from any other animal known.

Why is the Yowie is even less probable than the Yeti or Bigfoot?

Because there is generally no "evidence" whatever to collaborate their existence. Bigfoot advocates at least have low quality movies that suppose to depict it, and foot prints. The Yeti has supposed tissue remains (whose DNA wasn't checked) and other evidence. All the Yowie has as proof is eye witness accounts as no bones, food, droppings, living places or even blurry pictures are generally found.

but here we have no evidence at all.

Why Australia is the less likely place for an undiscovered ape or ape-like creature to exist?

Because Australia is a giant death trap. It's a giant desert with almost no sources of water, and even if you come with enough supplies, almost every animal that you'll come across will try to kill you and probably succeed. It didn't get the title Badass of the Week for nothing.

It should be noted, that a previously unknown specie of apes have already been discovered, namely the Gorilla, that wasn't discovered by the western world until the middle of the 19th century. The difference is that they lived in an area that was hard to reach, lush jungles and mountains, but hospitable for life, Australia is the complete opposite, it's mostly a desert which means that most of Australia doesn't have lush vegetation but is comparable easily traversable when using modern technology, so the number of unexplored places in Australia is much smaller than, the amazonian Jungles, or the Jungles of nearby Papua New Guinea.

*-As noted in the comments, Australia is a very harsh living environment for Humans and Apes, but sustains thriving ecosystems of animals of different types. 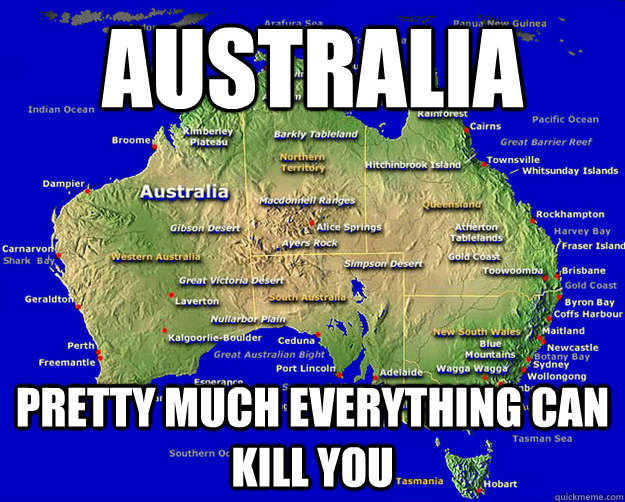 5
Did/do women select for protectiveness in their mates?
1
Have extra-terrestrials ever been in contact with humans?

14
Are there any sightings of the Loch Ness Monster before 1933?
18
Is the Texas Chupacabra real?
6
For the same size, is real estate cheaper in Australia than Japan?
10
Is this tapeworm diet ad real?
16
Are animals fleeing Yellowstone park?
5
Are there 80,000 unoccupied residential properties in Melbourne, Australia?
65
Are raptors in Australia intentionally spreading brush fires to smoke out prey?
4
Are coal seams in Blue Mountains (Australia) burning?