Are there technologies that provide unlimited free energy?

Many different sources claim to be able to produce "unlimited free energy". For example:

Is it possible to create energy out of nowhere?

Creating energy out of nowhere violates the first law of thermodynamics. Energy can only be changed from one form to another, e.g. from kinetic energy to heat, but it can neither be created nor destroyed.

This is an empirical law, but it has a lot of experimental evidence behind it. It would take some extremely convincing evidence to overthrow it, not to mention a whole lot of new physics.

An answer to your question can be found in Noether's theorem, which is one of the most important mathematical physics theorems.

Energy is a conserved quantity as long as physical laws are unchanging in time (as long as they display a time translation symmetry).

An archetypal example of this is the first law of thermodynamics.

Furthermore, in quantum field theory, you can create energy out mass (E=mc2), so a different conservation law is found.

The energy-momentum vector is conserved as long as physical laws are unchanging in space-time (as long as they display a space-time translation symmetry).

For example, an electron and a positron can annihilate and generate photons with much more energy than they initially had, but their mass disappears.

Finally, in general relativity, the law still holds locally. In particular, the following law still holds (and therefore there is no "free lunch" anyways, and the previous findings are still valid locally). To explain better: "local" in cosmology means "in areas of the universe the size of a galaxy".

The energy-stress-momentum tensor is locally conserved.

For completeness, there is some doubt about global (cosmological) conservation of energy. Noether's law still holds, but only locally, because the definition of energy and time is only valid locally. The consequence of this is that we don't have a general conservation theorem for energy in general relativity. For example, a universe that is expanding, and whose expansion is accelerating does not conserve energy.

A layperson's dissertation can be found here.

What does "nowhere" mean? Does a metastable vacuum count as nowhere?

Edit: There's an episode of Mythbusters where they tried various approaches, including one which wasn't so much "free energy" as "free to me energy" (taking electricity from a power line using nearby chickenwire, IIRC).

It really depends upon how you define things, as the other answers have noted, perpetual motion machines violate the laws of thermodynamics, specifically the first and sometimes the second. However, if we remove systems that extract more energy from a system than is put in, we are still left with systems that are able to extract energy to produce useful work.

If we define unlimited free energy as a device that is able to run without human energy being put in (e.g. generated electricity, mechanical motion, etc.) then there are some devices that are able to operate on their own without an obvious means of input. 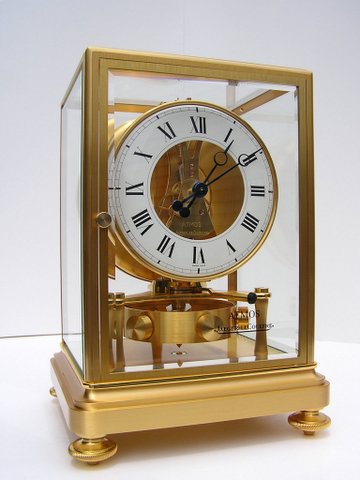 Clocks, such as the Jaeger Le Coultre Atmos (catalog) is arguably one of the better examples of this in that it has no visible means of winding or putting energy into the system; however, it is not a perpetually motion device as it will eventually run down to to mechanical wear and tear due to the effects of friction.

However, this does raise an interesting point, while true "free energy" may not be possible, does energy extracted from existing system and used to perform useful work count as free energy? While it is obvious that there is a significant amount of energy put into the construction of the clock (or extract of wind, tidal, solar, water, etc.) the long term work produced like exceeds what humans have put into the system. This could also apply to the other forms of power generation cited which generate significantly more useful work for the amount of human work put into the system when compared to more primitive devices such as hand powered cranks.

Across the board though, the "unlimited" part of the equation is an issue as friction eventually wears things down if they are left to their own devices. Periodic maintenance can keep things running without too much effort in the scheme of things, but if that maintenance is neglected then the systems will eventually fail.

In summary, it is very unlikely we are ever going to have a means of getting something out of nothing; however, with proper application of engineering it is possible to extract more useful energy from a system than is put into extracting that energy. This arguably could be considered "low cost" or even "free" energy depending upon how much energy is invested in getting it out.

"Unlimited" and "free" are two absolutes that, in this case, mean infinite energy with 0 cost. Obviously this is not possible according to present human knowledge. However, as correctly mentioned by Keith Thompson, solar power is a good approximation of "unlimited free energy". If proven true, the E-Cat technology, (claimed to be) based on a low energy nuclear reaction, could be another low cost/almost limitless energy source. Quoting the article:

The device was meant to take energy from the reaction between nickel and hydrogen and use that energy to create heat. The reaction would also produce a small amount of copper which would need to be taken out every once in a while.

Let's wait and see, even though what the scientific community has seen until now is too much marketing and too little science.

Unlimited free energy violates the SECOND (not the first law of thermodynamic).

So the answer is no.

Other answer, like solar, etc. may be near unlimited. The truth is everything is limited, even the sun.

I presume the question ask about perpetual machine of the second kind, basically the interesting one. http://en.wikipedia.org/wiki/Perpetual_Motion_Machine#Classification

Perpetual machine of first kind is "unnecessary". Economically speaking you can make a lot of money even if the first law of thermodynamic hold, which is what you want. The money breaker is that you can't violate the second.

I am far from an expert in this field but this question reminded me of this post by Phil Plait: http://blogs.discovermagazine.com/badastronomy/2010/11/26/black-friday/ It actually starts with a definition of the color black but it ends with the conclusion that empty space (literally empty, a vacuum with 0 molecules and 0 photons in it) still holds some sort of energy. If we one day find out how to harvest this energy we would quite literally be creating energy out of (realllllllly) thin air!

Not the answer you're looking for? Browse other questions tagged physics energy perpetual-motion .

6
Did Tesla say that one could get or transmit energy through thin air
1
Can energy be extracted from the vacuum?
46
Did/does the US government keep secret papers by Nikola Tesla?
-4
Is the Infinity MG10 a working generator that consumes no fuel?

9
Does a prototype car that runs on water exist?
28
Is there any data on how efficient Tesla wireless power transmission was?
3
Is Gasification of Garbage a Viable Energy Solution?
26
Are there 14,000 abandoned wind turbines in the USA?
1
Has Brilliant Light Power developed a new source of energy from water molecules?