Will entering the ATM's PIN in reverse notify the police?

I received a rather intriguing email. It says that if I am at an ATM and I'm in the process of getting robbed, I just enter my PIN in reverse order e.g. 4321 instead of 1234. The ATM will still give me the cash but it will notify the police.

Other examples of this claim can be seen here, 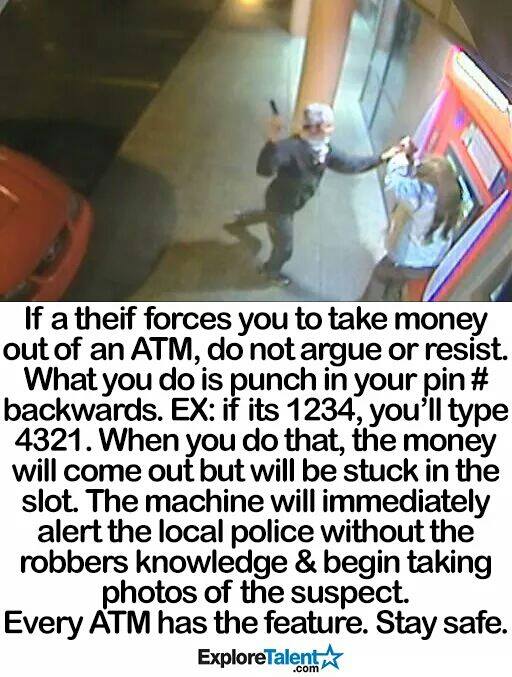 If a thief forces you to take money out of an ATM, do not argue or resist. What you do is punch in your pin # backwards. EX: if its 1234, you'll type 4321. When you do that, the money will come out but will be stuck in the slot. The machine will immediately alert the local police without the robbers knowledge & begin taking photos of the suspect. Every ATM has this feature. Stay safe.

You can find information about this on Wikipedia:

ATM SafetyPIN software is a software application that would allow users of automated teller machines (ATMs) to alert the police of a forced cash withdrawal by entering their personal identification number (PIN) in reverse order. The system was invented and patented by Illinois lawyer Joseph Zingher (U.S. Patent 5,731,575). Contrary to a widely circulated hoax (see below), the system is not implemented in ATMs presently.

The same information can be found on Hoax Slayer:

Brief Analysis
The claims in the message are false. Reverse PIN technology does exist. However, it has not yet been implemented by any banks. At this time, entering your PIN in reverse will NOT call police.

Snopes also covers this, with a history of failed attempts to make it law.

There was a similar question over on IT Security. I answer here as I answered there, based on my job experience in the alarm monitoring industry. The short answer is that the reverse-PIN system is documented as a possibility, but is not currently in use by any ATM network or manufacturer.

The idea of the reverse PIN is the "duress code"; something that appears to allow access and let the assailant do what they will, but in fact also trips a silent alarm. These exist in home and commercial alarm systems, allowing a person being forced to disarm the system at gunpoint to signal for help in a way that's not obvious to their assailant.

In ATMs, however, there are two fundamental problems with the idea of a duress code PIN, no matter how it's implemented.

First, and foremost, is that ATMs are designed to be fast. You get the cash and you're gone. The average traditional bank robbery (getting the money from the human tellers in the office) takes about 3 minutes, according to an article in Police Magazine, and those include the amateur note-passers that only want one teller's tray; professional armed gangs posing a serious threat to life take longer because they want more money from more places. A home invasion or jewelry-store robbery normally takes much longer than that; the assailant needs the extra time to gather up the things of value they want to take, giving the police the time they need to respond. My company, which as I mentioned primarily does video verification of alarm signals, has documented smash-and-grabs and armed robberies of stores we monitor lasting upwards of 10 minutes.

The average ATM cash-out transaction? Less than one minute, according to InfoCash (an ATM manufacturer whose latest generation claims to reduce that average time to 28 seconds). This makes a duress code for an ATM nearly useless, because a patrolman would pretty much have to be in visual range of the ATM in the first place in order to respond fast enough to catch the robber fleeing the site. Keep in mind that several seconds can pass before the monitoring center even receives the alarm signal (the NFPA mandates a maximum of 10 seconds for fire alarms, which we often also monitor and so our entire system has to be that fast), and then the monitoring center must call the police dispatcher and the dispatcher must relay to the patrolman. Most ATM robbers are instead caught hours or days later using evidence from the scene, primarily recorded video from the CCTV system (which is, in addition to false alarm reduction, a primary service of our company; review the video, produce the stills, assist the police).

Second is that, because ATMs and their function are so widely known and used, a common, easy-to-remember duress PIN is not an option (as it would be for all users of a single alarm panel, or even for multiple panels of a chain store's various locations), because if there was one duress code for all ATMs of a particular bank, it's very likely the robber will know it. That means that each user must choose a unique duress PIN on top of a unique "normal" PIN. With many users having trouble remembering their normal PIN that they use regularly with only the pressure of the person behind them in line, how many would you expect to remember a duress PIN they've never used before when held at gunpoint? We have problems with alarm system keyholders remembering the common duress code to their own alarm panels, which is why we put human eyes on every opening and closing in our monitoring center.

The reverse PIN mechanism, which has been documented and patented as other answers stated, but is not currently in use with any ATM system according to Snopes, is designed to mitigate this second shortcoming by allowing the user to remember one number and simply enter it backwards. This however produces another problem; the resulting system will not tolerate palindrome PINs. The documented system apparently has additional methods to derive a "panic PIN" from the normal one in the case of palindromes, but that's an additional complexity which would make it that much harder for someone to remember under stress, and given that there are only 10,000 possible four-digit values, from a security perspective you want as many of them to be potentially valid as possible, to prevent a lucky guess at the PIN from someone who's stolen the card (which is, from raw numbers of losses to bank robberies versus card fraud, a much greater financial concern to banks). Making any of them invalid for any reason, including not being able to derive a duress PIN from it, works at cross-purposes to the greater problem.

While the technique is possible, and as noted, the time it would take for a response to an alert to the nearest public safety office would probably be beyond a relevant response time. There would be the additional risk of failure in getting the response - who becomes responsible for this.

It would expose the bank to liability that they can externalise by simply not implementing the approach.

In San Bernadino county a study shows that response to burglar alarms have a mean duration of just over 17 minutes. A major manufacturer of ATMs indicates that they await demand from customers (presumably the banks) to implement a solution. A US public safety response is mandatory (ATM Consumer Protection Act 15 U.S.C. 1693 918 (b)) if activated.

Not the answer you're looking for? Browse other questions tagged technology security .