The popular understanding (at least among those who are not climate skeptics) of global warming is that it is likely to create environmental catastrophe for reasons such as spreading deserts and environmental degradation (for example, the following quote is from the Union of Concerned Scientists with my emphasis):

Climate scientists predict that if carbon dioxide levels continue to increase, the planet will become warmer in the next century. Projected temperature increases will most likely result in a variety of impacts. In coastal areas, sea-level rise due to the warming of the oceans and the melting of glaciers may lead to the inundation of wetlands, river deltas, and even populated areas. Altered weather patterns may result in more extreme weather events. And inland agricultural zones could suffer an increase in the frequency of droughts.

But in Matt Ridley on How Fossil Fuels are Greening the Planet (YouTube video) Matt Ridley makes the claim that fossil fuel use has had great positive environmental impact including preventing deforestation and making the world greener. Specifically, about 1:30 into the video he claims the following:

The claim that I specifically want to question: Ridley claims that recent research has shown that the world is, literally, getting greener. The cause of this is increased forestation, higher rates of plant growth, and the rolling back of deserts such as the Sahel in Africa. These changes can be traced to more rainfall and higher carbon dioxide levels. Both are good for plants and both are a consequence of the human production of carbon dioxide (rainfall increases in a warmer world through more evaporation). His claim is based on work by Professor Ranga Myneni at Boston University.

Is the world getting greener? Is the effect a consequence of higher carbon dioxide levels and the knock-on effects of global warming?

Your answer is pretty much entirely contained in the IPCC's Fourth Assesment Report, section 1.3.6.2 (Forestry), except for the part about the Sahel in Africa. It's pretty short and concise, so I recommend reading it for yourself.

Some quotes, with my emphasis:

Thus, the overall trend towards longer growing seasons is consistent with an increase in the ‘greenness’ of vegetation, for broadly continuous regions in Eurasia and in a more fragmented way in North America, reflecting changes in biological activity.

However, in the humid evergreen tropical forest in Costa Rica, annual growth from 1984 to 2000 was shown to vary inversely with the annual mean of daily minimum temperature, because of increased respiration at night (Clark et al., 2003). For southern Europe, a trend towards a reduction in biomass production has been detected in relation to rainfall decrease (Maselli, 2004), especially after the severe drought of 2003 (Gobron et al., 2005; Lobo and Maisongrande, 2006). A recent study in the mountains of north-east Spain (Jump et al., 2006) shows significantly lower growth of mature beech trees at the lower limit of this species compared with those at higher altitudes.

For North America, recent observations from satellite imagery (for the period 1982 to 2003) document a decline for a substantial portion of northern forest, possibly related to warmer and longer summers, whereas tundra productivity is continuing to increase (Goetz et al., 2005). They also confirm other results about the effects of droughts (Lotsch et al., 2005), as well those made by ground measurements (D’Arrigo et al., 2004; Wilmking et al., 2004).

Thus: Yes, the world is overall getting greener by a couple of tens of percents. This seems to be largely because areas of Eurasia and North America that were previously very cold are now getting warmer.

However, despite this overall "greening", some areas of the world (and particularly, areas that humans like living in) seem to be experiencing a reduction in biomass. This is where your quote from the Union of Concerned Scientists comes in. They are worried that the areas people actually farm in will become less productive due to global warming, and an overall increase in net primary productivity due to an Eurasian bloom doesn't exactly assuage that fear. If you want more information as to why they would be okay signing on to that quote, section 1.3.6.1 (Crops and livestock) more directly addresses it.

Yes, the world is literally getting greener, largely thanks to anthropogenically-elevated atmospheric CO2 levels.

Is the world getting greener? 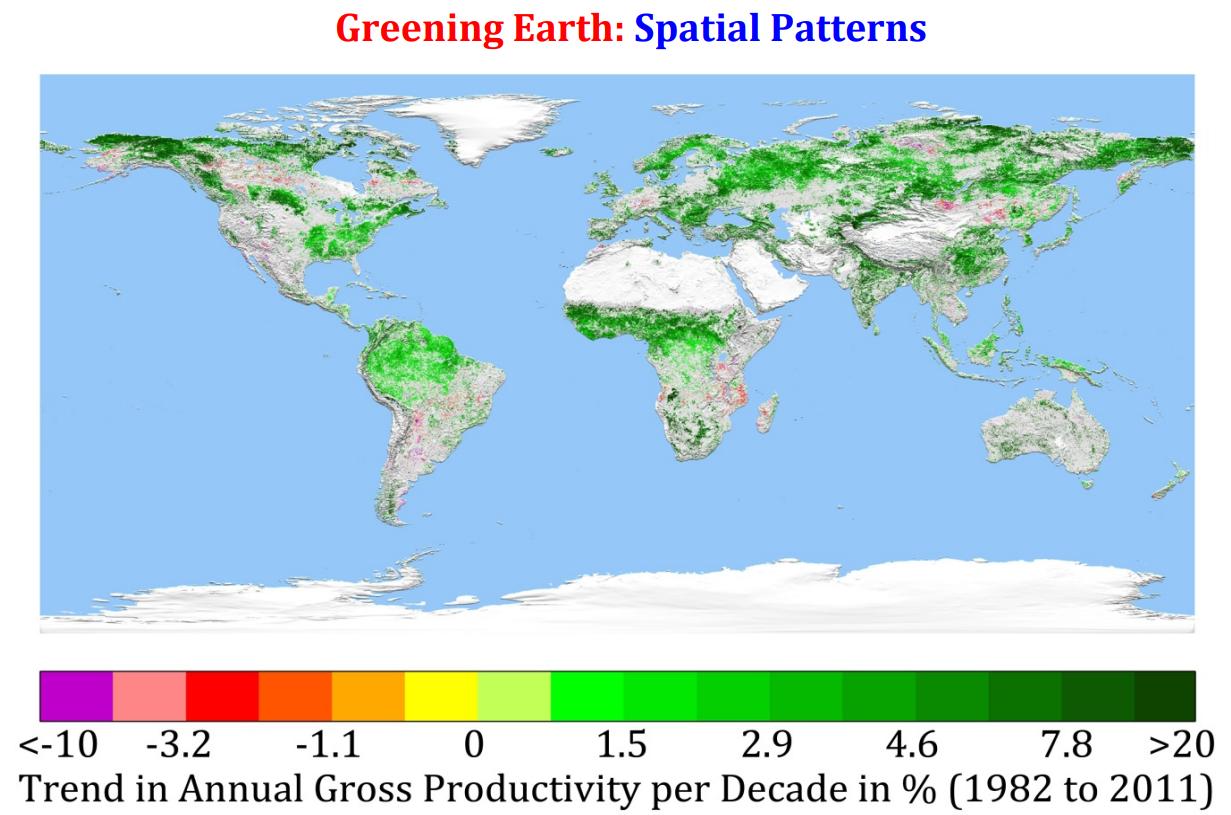 This excerpt is from a 2009 National Geographic article about how even the "Sahara" desert (really the Sahel) is greening:

Images taken between 1982 and 2002 revealed extensive regreening throughout the Sahel, according to a new study in the journal Biogeosciences. / The study suggests huge increases in vegetation in areas including central Chad and western Sudan. ... "Before, there was not a single scorpion, not a single blade of grass," he said. "Now you have people grazing their camels in areas which may not have been used for hundreds or even thousands of years. You see birds, ostriches, gazelles coming back, even sorts of amphibians coming back... The trend has continued for more than 20 years. It is indisputable."

Why is it getting greener?

An effect called the CO2 fertilization effect leads to healthier, faster-growing plants. Higher CO2 levels in the atmosphere cause increased plant growth. A study published in 2013 found that in warm and arid environments over a 28 year period (1982-2010), as CO2 levels increased by 14%, foliage cover increased by 11%.

For example, here are the results of an experiment of elevated CO2 levels on pine trees: 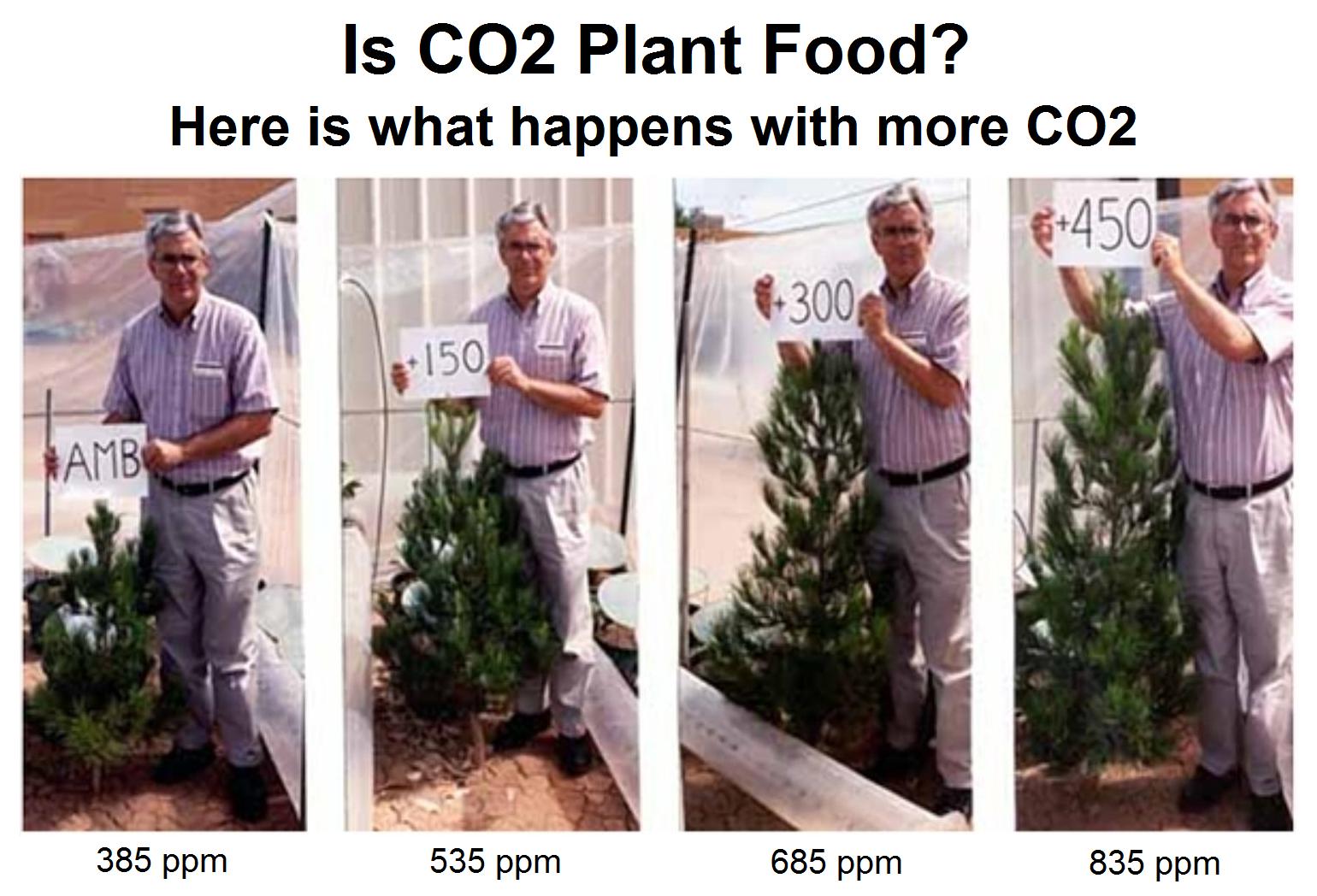 The fact that elevated CO2 is very beneficial for plants has been known to science for a century. The first F.A.C.E. (free air carbon enrichment) study that I'm aware of was done nearly a century ago, in Germany. Scientific American wrote about it in 1920. In that article Scientific American called anthropogenic CO2 “the precious air fertilizer,” and from this photo, which accompanied the article, it is easy to see why. It shows potatoes grown with and without the benefit of extra CO2:

about 15 percent of agricultural yields are due to CO2 we put in the atmosphere.

If you look at plant growth rates in response to CO2 enrichment & depletion, that conclusion is inescapable.

Yet 15% is really a conservative estimate, a lower bound. The agricultural yield enhancement from anthropogenic CO2 is really at least 15%.

Bunce (2012) finds that the widely-used FACE methodology for measuring plant response to elevated CO2 results in an underestimate of the agricultural productivity improvement from higher CO2 levels (as also explained by Prof. George Hendrey).

Here's an article about a 12-year-long University of Michigan F.A.C.E. study which found that:

CO2 is a more stable, less reactive molecule than O2. Venus and Mars both have atmospheres which consist mostly of CO2, with almost no free oxygen. But on Earth the opposite is true. There are more than 500 times as many O2 molecules in the Earth's atmosphere as CO2 molecules. Why is there so little carbon dioxide, and so much free oxygen, in the Earth's atmosphere? The answer is that Venus & Mars are dead planets, and the Earth is not. Its plants use CO2 and produce O2, and its animals use O2 and produce CO2. In the tug-of-war between plants and animals, the plants won. Plants have tugged the CO2-O2 tug-of-war rope all the way to the end. (Some carbon also ends up sequestered by animals in calcium carbonate shells, etc.) Animals are relatively scarce, compared to photosynthetic plants, and the plants have used up nearly all the CO2. The outnumbered animals just can't produce enough CO2 to keep up.

That's why, on Earth, O2 is plentiful, and CO2 is measured in parts-per-million.

Higher CO2 levels are very beneficial for agriculture. C3 photosynthesis plants, like wheat, rice, all vegetables, all nuts, and nearly all fruits, benefit the most from additional CO2. But even C4 plants, like corn and sorghum, grow better with higher CO2 levels, especially when under drought stress. Thousands of studies have found that nearly all plants benefit from additional CO2.

That's why commercial greenhouse operators use CO2 generators to artificially boost the CO2 levels in their greenhouses to 2.5x to 4x normal levels: because higher CO2 levels result in much faster-growing, healthier plants.

The IPCC's AR5 estimate is that 45% of anthropogenic CO2 emissions remain in the atmosphere each year. They estimate that 55% of total emissions are taken up by oceans and biosphere, and they think over half of that is probably taken up by the biosphere, through greening. AR5 estimates that the terrestrial biosphere removes about (2.5/9.2) = 27% [p. 6-3] or 29% [Fig. 6.1] of anthropogenic CO2 emissions from the atmosphere, each year, and that the oceans remove another 26% [Fig 6.1]. (There are wide error bars on those numbers, but the 55% sum has narrower error bars than the two addends.)

Not the answer you're looking for? Browse other questions tagged climate-change environment weather fossil-fuel .

9
Does climate change mean that weather becomes more variable in addition to being warmer?
18
Could Global Warming be good for life?
2
Will a warming world directly damage human health?
3
Will reducing atmospheric CO₂ reverse the effects of climate change over a few decades?
13
Is avoiding global warming by preventing CO₂ emissions far too expensive compared to geoengineering or adapting to a warmer world?
13
Are the IPCC climate change models overestimating sensitivity to carbon dioxide?
5
Does physics give a climate sensitivity to carbon dioxide of about 3°C?
39
Is Matt Ridley's assertion that the most extreme of the IPCC climate projections is based on very implausible assumptions correct?
4
Does each doubling of CO2 cause a 2-4°C increase?