How many almonds does it take to get cyanide poisoning?

I was at lunch today and the conversation turned to almonds and their cyanide content. One co-worker said almonds contain a lot of cyancide and the number of almonds that can kill you surprisingly low. 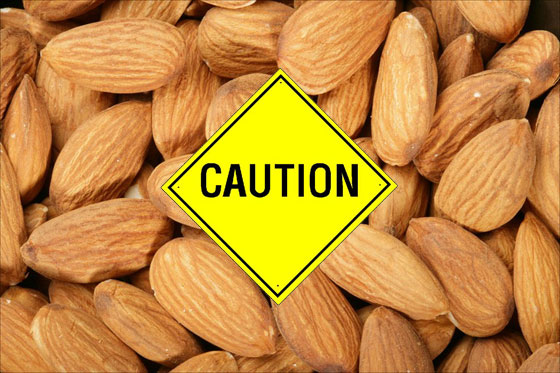 My question is "how low"? They couldn't answer, except to say it's low.

After a quick google search I found this link that says the number is 15. FIFTEEN!!! I've had about that many almonds today... so that can't be right. And that link is from a questionable source (google+) but I've heard this urban legend before.

How many almonds will it take to kill a human? I'm looking for LD50 of a 70kg person.

With bitter almonds, 8 - 32 almonds will give you the lethal dosage of cyanide. Bitter almonds yield about 6.2 mg of cyanide per almond and the LD50 for cyanide is 50 mg - 200 mg.

This applies only to bitter wild almonds: considering that you're not dead, you most likely ate domesticated sweet almonds, which apparently do not have this problem. The sale of wild almonds may be illegal, in fact, though I can only find blogs and internet comments alluding to this.

Wild almonds are bitter, the kernel produces deadly cyanide upon mechanical handling, and eating even a few dozen at one sitting can be fatal.

While wild almond species are toxic, domesticated almonds are not;

This is an addition to Avi's answer.

The varieties are sweet and bitter almond (the latter is the one with amygdalin which is the source of the cyanide as well as the aroma (benzaldehyde)) almonds, see http://en.wikipedia.org/wiki/Almond#Sweet_and_bitter_almonds.

Here (Germany) bitter almonds are sold only in small amounts for baking which are labelled that they are not for raw consumption, and are to be kept away from children. Here's a newspaper article from 1964 about a discussion whether the allowed package size should be reduced to 50 g (which is AFAIK the currently available package size). The article argues that till then the opinion was the awful taste provides enough safety. For the counter argument they cite a number of studies that conclude many people are really bad at smelling and tasting, and that the knowledge about the bitter almonds in the population was decreasing.

However, smelling of cyanides has been studied a lot in the 1950s and 60s, and huge differences in the human "limit of detection" and substantial numbers of people who do not smell cyanide have been found (Literature list 1 Literature list 2). Also how people describe the smell of cyanides differs a lot (not surprisingly, as at least in western cultures, smells are hardly described at all, so talking about smells is difficult, and also considering the huge differences in smelling sense between people).

Personally, I smell cyanide, and I perceive the smell of the cyanide as very different from the smell of the benzaldehyde (almond aroma, amaretto, ...) which are both released by hydrolysis of the amygdalin. I never tried tasting bitter almonds (only smelling, e.g. mashing them with water, and if you like to separate the cyanide smell from the benzaldehyde smell, with a small amount of an odorless acid)
Even if you happen not to be able to smell cyanide, the benzaldehyde content is very remarkable compared to sweet almonds. So if the almonds you ate tasted and smelled like "normal" almonds, you ate sweet almonds.

Not the answer you're looking for? Browse other questions tagged nutrition toxicology .

4
Has anyone died from eating fruit pits that contain amygdalin (cyanide)?
8
Does anyone know what cyanide tastes like?
6
Do the seeds from 20 apples contain a fatal dose of cyanide?

16
Does it take 200L of water to make a latte?
11
Does vinegar have bactericidal properties that help remedy food poisoning?
19
Does putting warm food in the refrigerator make it more likely to give you food poisoning than letting it cool off first and then refrigerating it?
8
Does anyone know what cyanide tastes like?
2
How many calories is starving?
17
Does it take time for the brain to realize that you have eaten too much?
16
Does one SUV tank of ethanol "take as much grain as could feed a person for a whole year?"
14
Can eating a few cherry pits lead to cyanide poisoning?