Does popped popcorn have less calories than unpopped?

If you look at the nutrition facts on a bag of popcorn, they sometimes list "popped" and "unpopped" separately: 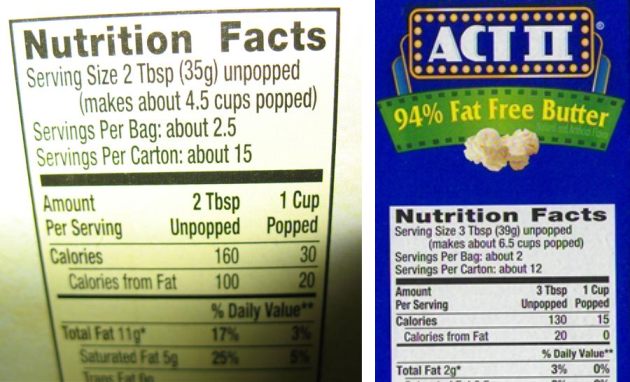 (images above shamelessly stolen from the current answers :)

Unfortunately, when you calculate the total calories in the entire bag, the two don't match. I've seen a number of dubious claims online for why this is:

Personally, I believe it's because there's usually so much butter left at the bottom of the bag, but this doesn't explain why there would be a difference for non-buttered popcorn (which I think there is...).

So, which one of these claims, if any, are correct?

Popcorns expand when they pop, because of the moist inner of the pop corn, depending on the corn, the number of unpopped kernels varies.

Taken from the paper "Role of the Pericarp Cellulose Matrix as a Moisture Barrier in Microwaveable Popcorn" by "Agung S. Tandjung".

Number is usually around 10-20% was how I took it from that paper.

There is not any crazy reasons why the numbers doesn't match. On popcorn packages they estimate how much popped popcorns the end result will turn into. I thus assume they take in consideration that not all kernels pop. In the estimation on the amount of popped popcorns you will get they the number thus is lower than if all kernels popped, and if you multiply estimation with their energy value you will fall short of the unpopped's energy value.

This is simply math, not some magical phenomena or butter being stuck inside the bag. 15% of kernels doesn't pop in their estimation, most probably, which is why if you multiply estimation with popped energy value only get to 85% of the energy value of the unpopped kernels. 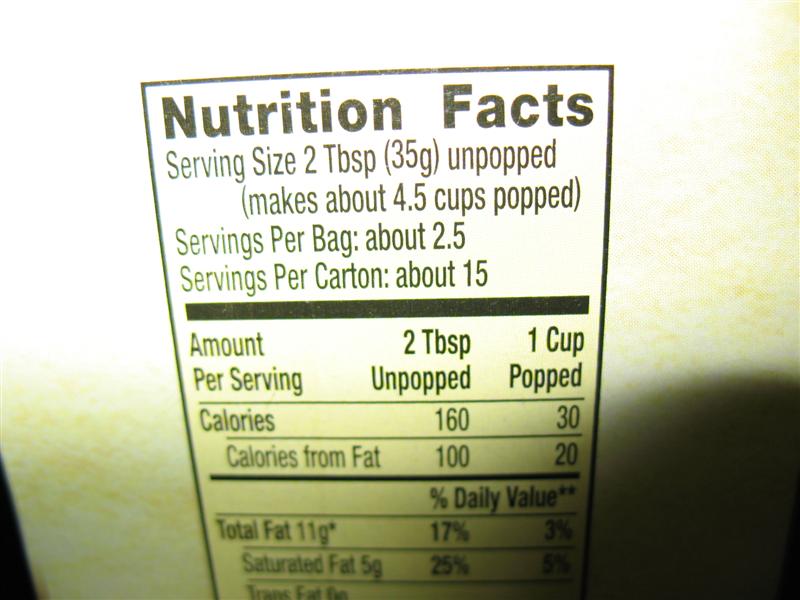 The popped popcorns have less kernels. Why? Because not all kernels pops.

I asked "Garret Popcorn Shop" if my assumption was correct.

This is my original mail.

Dear Mr. Hambraeus, Thank you for contacting Garrett Popcorn Shops. We appreciate your inquiry. You are correct, we do take into consideration the ratio of unpoped popcorn kernels and it is for this reason the energry value is lower. Please let us know if you have any further questions or concerns!

This is the answer I got from Garrett Popcorn Shops. They gave an answer directly. The reason the values doesn't add up is because they take in consideration the ratio of unpoped popcorn kernels.

So it is at least true that popcorn nutrition labels show a difference between popped and unpopped (here: 25% difference).

If we're to take Micah's article, the average percentage of unpopped kernels after microwaving is between 4% and 47%, or 25.5%.

So it fits very well with the data available. I'd say it's perfectly reasonable to think that the difference is due to the average number of unpopped kernels after cooking.

21
Does the digestion of some foods burn more calories than it supplies?
14
Can a bomb calorimeter meaningfully measure food calories?
18
Is cooked protein less digestible than raw protein?
10
Is CICO (calories in, calories out) a useful concept in diets?
2
How many calories is starving?
3
Does the average American Thanksgiving meal contain 4,500 Calories?
6
Is eating food with your bare hands more tasty?
2
Does Tilapia have a greater inflammatory potential than bacon?