Can a society become unhappier with an increase in wealth?

People like to claim that less developed countries are happier, because they live the simple life and stronger family ties. We've all heard the saying:

Which is easy to dismiss by showing that rich nations do better on the satisfaction of life index than poor ones (yes, correlation does not imply causation, but I'm fairly sure there's a causal link in this case). I'm curious though if it's always the case that increased wealth leads to a negative impact on happiness, even after an adjustment period. Can a case be made that:

Where increase in money is the primary cause.

economics wealth happiness
Share
Improve this question
edited May 5 '15 at 10:18

In High income improves evaluation of life but not emotional well-being, the authors make the distinction between two factors aspects to happiness and then evaluate each aspect's relation with income.

The first one is emotional well-being, which they define as:

The second is life evaluation:

Life evaluation refers to a person’s thoughts about his or her life.

Additionally, they also measured what they called "blue effect," which the "average of worry and sadness," and "positive effect," which is defined "by the average of three dichotomous items (reports of happiness, enjoyment, and frequent smiling and laughter)."

After evaluating the results of the 2008 and 2009 Gallup-Healthways Well-Being Index, the authors found that emotional well-being correlates with income, up to an an annual income of $75,000, after which point it has. They also found that both positive effect and blue effect correlates with income (positive effect positively and blue effects negatively), also only up to a certain point. On the other hand,m life evaluation correlated strongly with education and income.

In light of those results, they conclude that (emphasis mine):

The data for positive and blue affect provide an unexpectedly sharp answer to our original question. More money does not necessarily buy more happiness, but less money is associated with emotional pain. Perhaps $75,000 is a threshold beyond which further increases in income no longer improve individuals’ ability to do what matters most to their emotional well-being, such as spending time with people they like, avoiding pain and disease, and enjoying leisure.

Considering that wealth reduces sadness and worry, it's unlikely that an increase in wealth would result is a loss of happiness, unless wealth comes with an associated cost (sickness, for example). Wealth alone, however, does not seem to cause unhappiness.

Income was a moderately strong predictor of life evaluation but a much weaker predictor of positive and negative feelings. Possessing luxury conveniences and satisfaction with standard of living were also strong predictors of life evaluation. Although the meeting of basic and psychological needs mediated the effects of income on life evaluation to some degree, the strongest mediation was provided by standard of living and ownership of conveniences. In contrast, feelings were most associated with the fulfillment of psychological needs: learning, autonomy, using one's skills, respect, and the ability to count on others in an emergency. Thus, two separate types of prosperity - economic and social psychological - best predict different types of well-being.

In any case, neither studies found a negative correlation between wealth and happiness.

Arguably, one of the best research on this subject was done by Princeton University, which showed that up to about $75000, money did have a measurable impact on the "happiness" of the owner. Here is a link to that study:

It specifically found that beyond $75K, it did not have a significant impact. However, it also did not find a negative correlation for higher values of money.

Another relevant link may be here: http://www.livescience.com/8580-money-buys-happiness-point.html

Of course, Bhutan's efforts at measuring "Gross National Happiness" are also interesting, but I have not seen the results of that.

So, the short answer to your question seems like a "No".

Yes, an increase in wealth can cause unhappiness when there is greater disparity between the rich and the poor.

The website Natural News offers this quote in an article about inequality and health:

Research has shown us something rather remarkable: the stress that comes from inequality in our society, in particular from economic inequality, may have more of an effect on our overall health than any other single factor. And conversely, in those societies in which economic equality is greater, in effect a larger middle class, they experience far greater health, happiness, longevity and well-being. Where there is less disparity between rich and poor, there is also a proportionate reduction in violence, teenage pregnancy, depression, anxiety, suicide and homicide.

What that article boils down to is this: You can be perfectly happy when you're poor as long as you aren't bombarded by expectations to have more material wealth. In a richer society, especially where material wealth is fluid, there is a greater risk of polarization between the rich and poor.

Jean-Benoit G. Rouseau has written an excellent dissertation comparing income and well-being (pdf). That paper points out that it is possible to experience a net gain in income that results in a net loss of well-being. The following is an excerpt from the paper's conclusion:

The lack of growth in aggregate happiness despite massive economic growth re ects the fact that, over the last few decades, income gains have accrued to the top income earners to such a disproportionate extent that income has fallen for the poor. Over the last thirty-ve years the happiness gap between the rich and the poor has widened in pair with income inequality.

Regardless of the reason given, happiness is nowadays more a commodity of rich people than it was thirty-five years ago. Analysis of patterns in European countries conrm the crucial role of income inequality in the conversion of economic growth into aggregate well-being. The increased well-being gap between the rich and poor has widened in other developed countries. It appears that this fact should receive additional attention and be consider as a stylized fact of the relationship between income and happiness. Correcting for taxes has little eect on the estimated slope of the happiness function and using permanent rather than transitory income surprisingly lowers the gradient.

There you have it, increasing wealth can cause unhappiness when the distribution of that wealth is highly polarized.

Named for economist and USC Professor Richard Easterlin who discussed the factors contributing to happiness in the 1974 paper "Does Economic Growth Improve the Human Lot? Some Empirical Evidence. Easterlin found that within a given country people with higher incomes are more likely to report being happy. However, in international comparisons, the average reported level of happiness does not vary much with national income per person, at least for countries with income sufficient to meet basic needs.

Some more comprehensive studies have since claimed to disprove this paradox. (See the controversy section of the Wikipedia page.) One study is discussed in this Freakonomics blog post. The link to the original study in this post is dead, unfortunately. The key finding is that happiness is strongly correlated (0.82) to the logarithm of wealth (see graph below). So the more money you have, the more additional money you need to move up by one "happiness unit". But there is no evidence that happiness will actually start decreasing after a certain point. 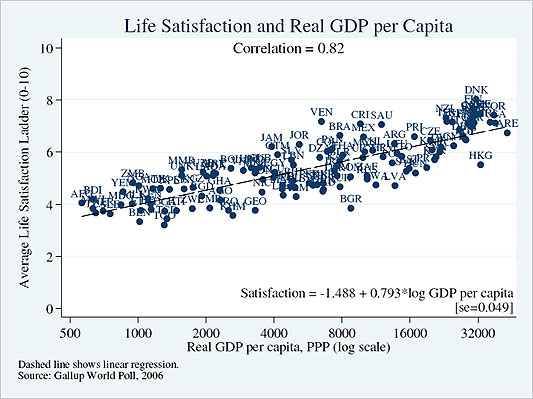 Based on: Daniel Kahneman "Experienced Utility and Objective Happiness: A Moment-Based Approach"

One of the major issues in this research is the "Treadmill" effect, which causes out happiness to be related to the change in out conditions.

So, having a large amount of money (or other thing that makes us happy) will make you happier in the short run, but you happiness level will return to normal very quickly.

Regarding you specific question, a society that increases it's wealth, but the loses some of it (but still having more then it started with), may be unhappier then the original society.

A large part of the problem is that while income is unbounded, happiness is normally inferred on a limited scale (0-10 or 1-5 or similar). Therefore, it is a mathematical fact that there must be diminishing returns. There is often a misinterpretation in the press whereby a study that shows diminishing returns (i.e., a small increase in reported happiness needing a very large increase in income after a certain threshold) being reported as "after a threshold it makes no difference."

Look for example at the Deacon and Kahneman study's Figure 1: the solid line is reported ladder (from 0 to 10, do you feel your life is the worst or the best possible ). There is a bend at ~80K, but the self-reported overall value keeps increasing beyond it. The other lines do flatten. They measure whether people reported feeling positive feelings over the previous day (although I do question whether feeling stress-free is always good). The headlines read "The Price Of Happiness: $75000" (e.g., at the HuffPost, but there are more if you google it).

Aside from all the answers above, your questions can VERY easily be answered by observing immigration patterns.

There's a MAJOR immigration from "less developed", as you put it, countries, to "more developed". There is pretty much no immigration to speak of in the other direction (yes, there are some expats, but the numbers are negligible by comparison). While that's pretty obvious, let's look at hard #s (Source: "International Migration Report 2006: A Global Assessment" from UN):

Please note that most of the "less developed" percentage is from moving WITHIN less developed world - e.g. India/Bangladesh, Philippines to all over the place etc...

This is despite the fact that this immigration from a less developed country is, for lack of a better term, difficult - from the cost of migrating (relative to source country's income level) to difficulties in legal immigration; to completely different difficulties in illegal immigration, to the fact that in pretty much any country an immigrant is sure to encounter at least some level of unhappiness with his existence due to "taking the job" from native population (this is a universal phenomenon - immigrants from Eastern Europe see it in Western Europe, while the same exact Easter European population in their countries frowns on immigrants from Central Asia).

On the other hand, immigrating from more developed country is IMMEASURABLY easier - from the fact that you're likely to have a lot more financial resources to travel, to having even a small sums of money be worth a lot more in destination country cost of living, to the fact that (due to low #s) there is less likely to be a major resentment of the immigrant on the "stealing jobs" level. And generally the legal/political difficulties from the less developed country are less.

To add a somewhat crude summary, anyone from developed country who asserts that life is better in a "less developed" country without putting their money where their mouth is (that is, improving their own happiness by moving there) is at best self-deluded and at worst a lying hypocrite.

Not the answer you're looking for? Browse other questions tagged economics wealth happiness .

8
Is there a plateau in happiness vs. GDP per capita?
10
Is Bhutan an extremely happy country?
16
Does money correlate with happiness at a certain level?

30
Could McDonald's pay a $10.10 minimum wage with an increase of only 4¢ per meal?
18
Is the “Asshole Effect” a phenomenon correlated with wealth?
3
Can credit cards be cloned remotely with an RFID reader?