Did lightning strike the St. Peter basilica the night the Pope resigned?

The internet is full of this claim, most of them (it seems) use the same picture: 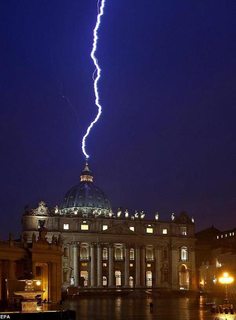 There are many other major news agencies reporting the same event, but by reading their articles, they seem very careful to use weasel words, like "it is said", "some assume", etc. This event did not happen thousands of years ago. It happened just recently at a place which is densely inhabited and full of tourists and reporters with cameras. So why are the reports of the event express uncertainty?

How can the news that lightning struck the St. Peter basilica the night the Pope resigned be verified?

The agency which employs him† cover the story

'He was a storm coming - says Alessandro Di Meo, the photojournalist ANSA author of the click -. When I saw the first lightning I had the idea and I immediately moved under the colonnade. I was almost forty minutes to fight with the camera and weather to try to make the photos I had thought.'' A race against time but also against misfortune:'' While I was cleaning the lens from raindrops, a first lightning struck the cupola. And I could not help but watch helplessly, as well as very angry.'' The misfortune, however, 'is not enough to discourage Di Meo, who has persevered in an attempt to try to make the photo so' as he had imagined.

'I tried again several times - adds the photographer - until 'a bolt of lightning struck the cupola just as I was taking.'' For lovers of photography, Di Meo also revealed the shooting data of the picture:'' The camera was sitting on a fence, and not on a tripod. The exposure time was eight seconds, 9 aperture and ISO 50 sensitivity '. Of course, the machine was set to manual and I mounted a wide angle lens that allowed me to include the whole church in the frame.''

The photo did not fail to provoke heated discussions, bounced especially on the web and social networks. Many voices in the network have questioned the veracity 'of the photo, suspecting a montage intervention or some photo editing. The denial of Di Meo and 'categorical:'' I understand that the picture may seem incredible. But photos of lightning if they have always been done - replica firmly reporter -. The only difference, in this case, and 'that is the lightning right, in the right place and at the right time. I succeeded in obstinacy, 'and because' no, even with a bit of luck.''

The IPTC info in the photo's JPEG metadata here is

Document title: VATICAN WEATHER POPE ABDICATION
Author(byline): ALESSANDRO DI MEO
Caption (description): epa03579544 A lighting strikes the basilica of St.Peter's dome during a storm, the same day Pope Benedict XVI announced his resignation, Vatican City, 11 February 2013. Pope Benedict XVI announced 11 February 2013 plans to step down on February 28, citing the job's pressures and advanced age. 'After having repeatedly examined my conscience before God, I have come to the certainty that my strengths, due to an advanced age, are no longer suited to an adequate exercise of the Petrine ministry,' he said. The announcement came during a Latin-language ceremony. He said he had long thought about his decision, which he said was for the good of the church. EPA/ALESSANDRO DI MEO
Headline: A lighting strikes the basilica of St.Peter's dome during a storm
Credits: EPA
Source: ANSA
Date created: 20130211
City: VATICAN CITY
Country: Vatican City State (Holy See)

IPTC info can be forged of course.

The BBC has video which looks like the same lightning strike from a slightly different angle.

Lightning strikes 40–50 times a second worldwide, for a total of nearly 1.4 billion flashes per year.

So there were probably around 4 million lightning strikes on that day. If every lightning strike represents Zeus passing judgement on someone who was within a few hundred meters earlier the day - we can't be sure the bolt was not aimed at the tourist who dropped a piece of litter in St Peter's square a few hours before.

† The photographer, not the Pope.

Not the answer you're looking for? Browse other questions tagged vatican .

37
Were there only two cars in Ohio in 1895, and they managed to crash into each other?

22
Did the Vatican build a secret property empire using Mussolini's millions?
14
Did the newly elected pope, Jorge Bergoglio (Francis), play any role in the 1976-1983 military regime in Argentina?